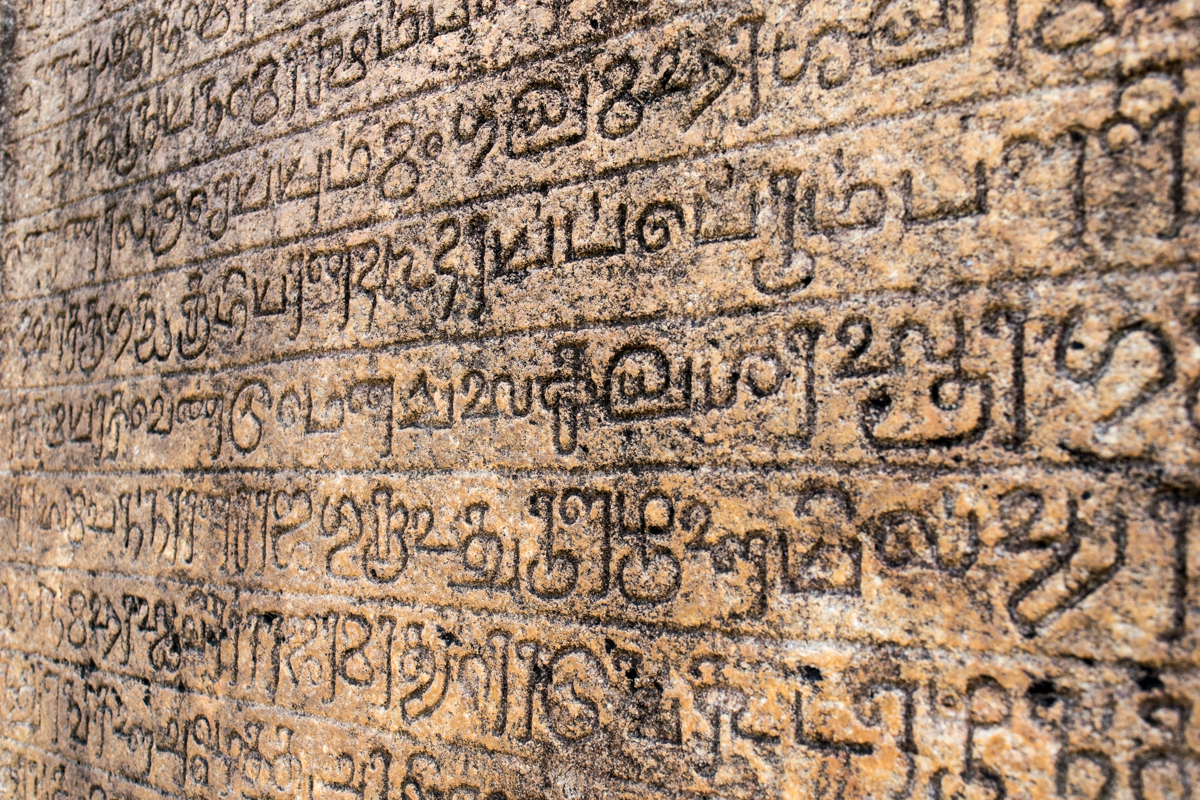 This is one of the well-preserved inscriptions in Sri Lanka.

The Velaikkaras rebelled against King Vijayabahu (1055-1110 A.D.) in his 30th year refusing to fight against the Colas and they were punished. It seems that Velaikkaras provided protection to the Temple of Tooth even during the early period of Vijayabahu due to the mention of construction of some buildings by them around the Temple of Tooth. Perhaps after the rebellion, they were removed beings the guards of the Temple of Tooth. After the death of Vijayabahu, there were several internal struggles and it is very likely that Mugalan Thera decided to engage Velaikkara forces again, for the protection of the Tooth Relic and the Bowl Relic of the Buddha, during that turbulent period. The purpose of this inscription is to give an assurance by the Velaieckara Soldiers that they would protect the sacred relics and the properties no matter what happened.

This inscription is located just next to the Atadage at Polonnaruwa.

The Temple of Tooth Relic built by the Commander Nagaragiri Deva on the instructions of King Vijayabahu and the surrounding shrines founded by the Velaikkaras shall be protected by the Velaikkara forces unto the dissolution of the world.

Obeisance to the Buddha! In the prosperous island of King Sirisangabo, Vijayabahu scion of the lineage of Iksavaku of the Solar Race gaining victory over many an enemy, entered Anuradhapura. At the request of the Buddhist monks he put on the crown in order to protect the Buddhist Religion. The king invited monks from Aramana (Myanmar) and purified the three Nikayas. The king who brought Lanka under a single canopy made donations to the three Nikayas three times equivalent to his own weight (coins), reigned 55 years and lived 73 years.

The Tooth Relic and the Bowl Relic which was at the Uttaramula of Abhayagiri Vihara was brought to Pulanari or Vijayarajapura and permanently kept at the Temple of Tooth Relic. The first anointment ceremony (of Vijayabahu) was held there (according to the Cullavamsa in the 18th year at Polonnaruva) which also house the colossal Buddha Statue, in which is held annually the ceremony of unloosening of sacred eyes and applying collyrium to them.

Rajaguru Mugalan Thera of Uttaramula, who is virtuous and learned, associating himself with the dignitaries came to the spot, called us and said “The Tooth Relic Temple should be under your custody’.

Thereupon we convened a meeting along with our elders and named the shrine ‘The great Temple of Tooth Relic belonging to three divisions of Velakkaras’ and decided that it will remain as our charitable institution under our own custody. For the protection of the shrine one servitor from each of the (three divisions) was appointed and one veli of land was allocated for the maintenance of each person, We shall protect the villages, the retainers, and the property belonging to the shrine, as well as those who enter for refuge, even it is detrimental to us. We shall endeavour as long as our lineage exists and even if we suffer deeper than we have suffered already.

To attest this we have delivered over (to Mugala Thora), having had it engraved on the copper plate and also engraved on a stone so that it may last as long as the sun and the moon endure.

Extracted from the information panel(Department of Archaeology) near the inscription.

Read about the decline of the Polonnaruwa kingdom.

The depository of Tooth Relic during the Cōḷa Occupation of Anuradhapura?