New Light on The Decline of Polonnaruwa (1196-1215): The Tamil Pillar Inscription from Rankot Vihara 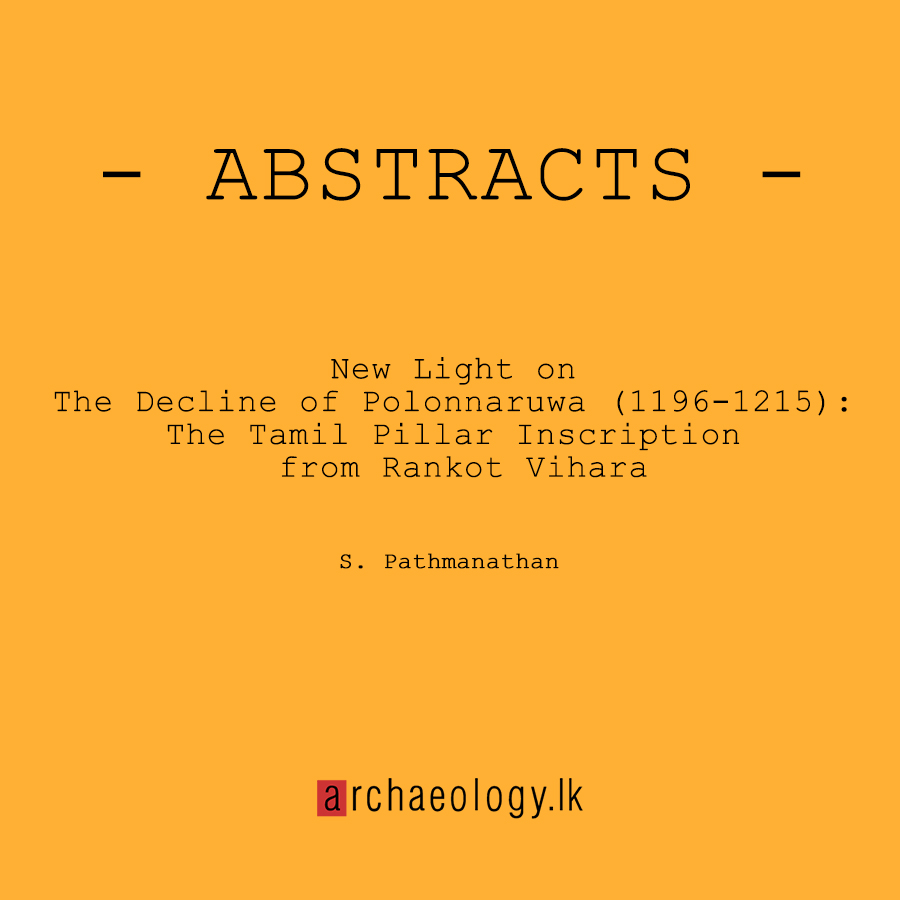 The Tamil Pillar Inscription at the premises of the Rankot Vihara was discovered during the course of an archaeological survey conducted by the Cultural Triangle in 1981, the presentation made here is based on the author’s examination of the copy of an estampage supplied by Prof. P.L Prematilleke, former Director of the Alahana Parivena Project of the Cultural Triangle, Polonnaruwa.

The text of the inscription is engraved in 10 lines on each side of a square stone pillar. The first half of the text engraved on two faces of the pillar is quite clear and the letters could be identified clearly. The portion of the text on the third face is not as clear as the estampage was not prepared with sufficient care and skill. The letters on the fourth face are completely worn out.

The inscription is not dated in the regional year of any king. On paleographical considerations it could be assigned to the early 13th century. In formation the letters represent a more advanced stage of development than those in the inscription of Parakramabahu I (1153-1186) and Nissankamalla (1187-1196). Dr.A Velupillai made a rather futile attempt at decipherment as evident from the text and translation of the inscription published by him. His failure to identify correctly the expressions in the first 12 lines has led to serious misunderstandings vitiating the importance of the record as a source of historical information.

The first three expressions could be identified as epithets of Nandikkirincatan. He was obviously a Cola feudatory claiming descent from a lineage of the Gangas who had connections with Kuvalalapuram, the capital of the Western Gangas. In the 12thand 13th centuries the Gangas of Pankala-natu had these epithets. Besides, the text suggests that he was a Velaikkaranexercising some administrative functions under a king, who was later raised to the dignity of a chieftain of a region (mantalam). He was probably a Cola military leader who had come to Polonnaruwa as an accomplice of Aniganga who is said to have occupied Polonnaruwa with the support of a Cola army. The inscription testifies to the presence of a feudatory chieftain of Ganga lineage in Polonnaruwa as one holding a position of rank and authority during a period of turmoil.

Department of History, Faculty of Arts, University of Peradeniya

This abstract was first published in the Peradeniya University Research Sessions, 2004, Vol. 9, pp.31.