The Artifacts found from the investigations in the Harbour

The Artifacts found in 1998

Most of the artifacts had been found by the private persons. On 14th May 1998, a maritime archaeology team (Department of Archaeology and volunteers) had carried out a preliminary investigation in the harbor (Jayatilaka, Gihan; Nerina de Silva, 1998 p. 1; Maritime Archaeology in the Ancient harbour at Ambalangoda, 2016 p. 32). According to the eyewitnesses, the timbers lie parallel to the shore. However, the team did not unearth the position of the wreck. Most of the artifacts found from the site had sold to the local dealers. The team gathered the information about the artifacts through interviews with eyewitnesses. The locals brought out various artifacts from their house and allowed to be photographed and recorded. 21 artifacts under 8 categories (A-H) were recorded by the group (Jayatilaka, Gihan; Nerina de Silva, 1998 pp. 1-5; Maritime Archaeology in the Ancient harbour at Ambalangoda, 2016 p. 32) (Table No 1).

The Artifacts found in 2007

The Ambalangoda harbor development project was carried out in 2007. Several types of artifacts emerged while digging the sea bed of the harbor. Cowry shells (Cypraea moneta), copper plates and ceramics are some examples of the artifacts. Two Arabic inscriptions can be seen in two copper plates.

The Artifacts found in 2012

The Maritime Archaeology Unit (MAU) of the Central Cultural Fund (CCF) has explored and excavated the site (Grid No 5 & 9 / 10 m x 10 m) from 1st of March to 10th of April 2012 to unearth more archaeological objects that belong to the ship wreck. Unfortunately, the team did not find any object from the site (Ambalangoda Exploration & Excavation Report – 2012, 2012 p. 5).

The Arabic Epigraphy found from the Harbour at Ambalangoda

Introduction – The Ambalangoda harbor development project was carried out in 2007 while digging the sea bed unearthed several types of artifacts. Discovering 5 copper alloy plates were a remarkable finding of the site(Table No 2). A notable thing whichcan be seen is two epigraphy in the reverse of the copper plates number 2 (2007/SL/S/AMBA/02 ) and 5 (2007/SL/S/AMBA/05).

The above table shows five copper alloy plates which have been displayed in the Maritime Archaeology Museum (MAM) of Central Cultural Fund in Galle Fort.

I. Description of the epigraphy

The plate has fragmented into two parts, probably, when it was under the sea bed or when digging the sea bed by the high-pressure water dredger. There are no decorations in the obverse and the reverse of the plate. The five plates have been made of copper alloy. This plate with epigraphy was deteriorated. It is covered by the brownish or blackish “patina”. This plates were conserved in 2014 before being displayed in the Maritime Archaeology Museum in Galle.

II. Photographs and stamp pages of the epigraphy 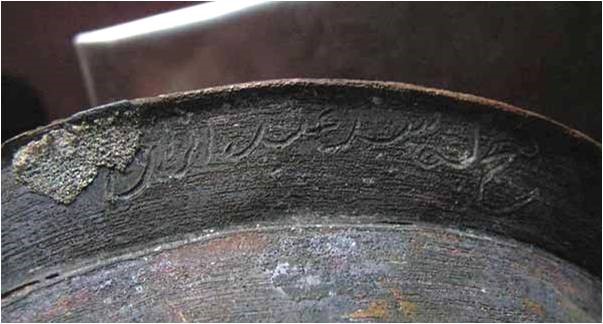 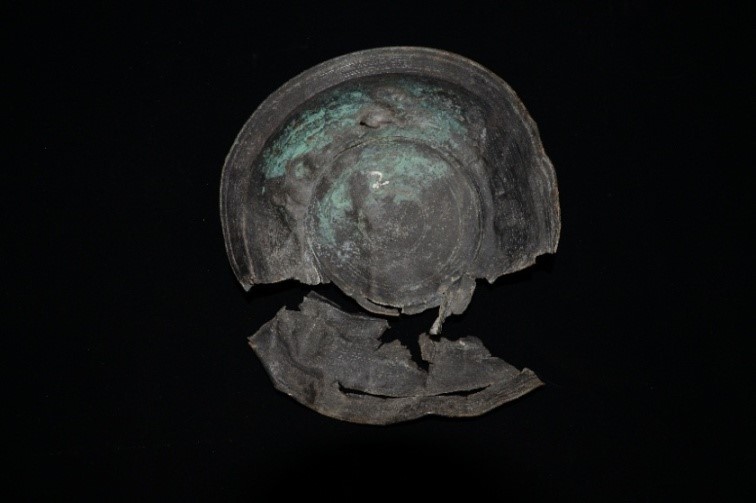 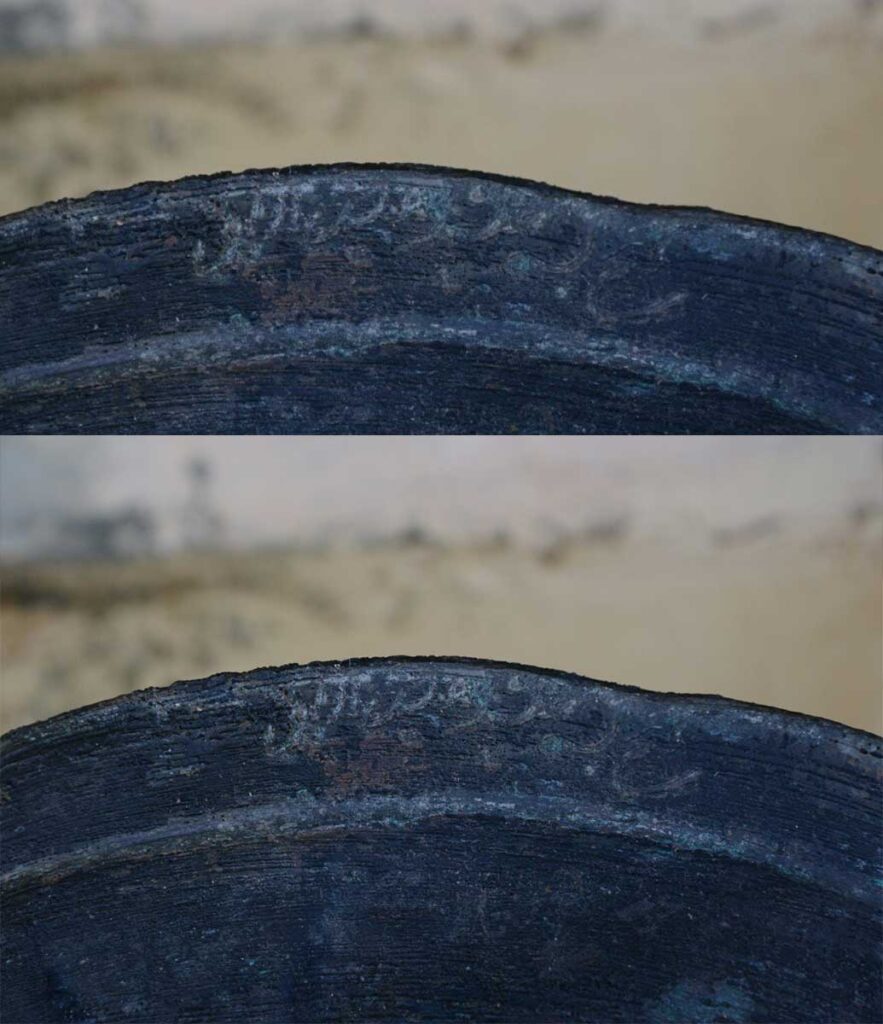 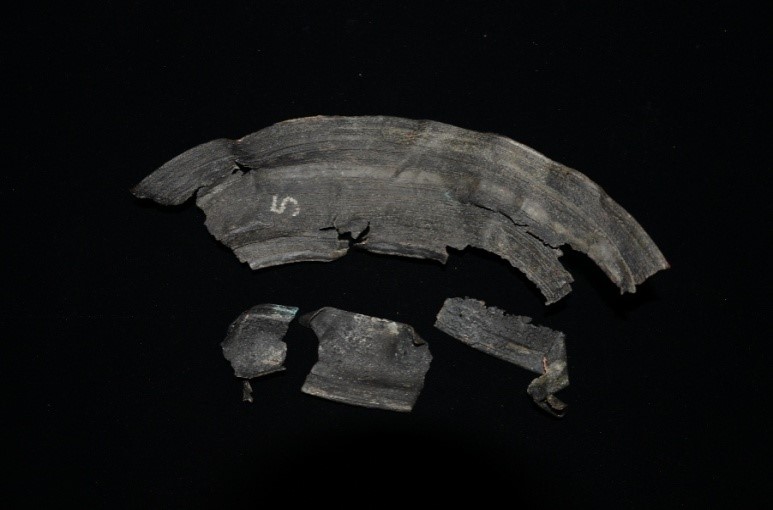 The period between the fourth and sixth centuries A.D. is generally considered to be a period of decline for the trade of Arabia.

The Arabic alphabet has 28 letters, all representing consonants, and is written from right to left. Twenty-two of the letters are those of the Semitic alphabet from which it descended, modified only in letters form, and the remaining six letters represent sounds not used in the languages written in the earlier alphabet.

It is a Southern Central Semitic language spoken in a large area including North Africa, most of the Arabian Peninsula and other parts of the Middle East.

Arabic is a language of the Quran and is the religious language of all Muslims. Literary Arabic usually called Classical Arabic, is essentially the form of the language found in the Quran, with some modifications necessary for its use in modern times; it is uniform throughout the Arab world. Colloquial Arabic includes numerous spoken dialects, some of which are mutually unintelligible (The New Encyclopedia Britannica,vol:1,, page: 508, 509, 51015th Edition, 2005, U.S.A).

Ceylon was earlier known to the Arabs on account of its pearl-fisheries and trade in precious stones and spices, and Arab merchants had formed commercial establishments there centuries before the rise of Islam (Abid;Page 838). This Arabic letter had been written without dottings, it reveals the early era before Islam, because after introducing Islam ,dotting to Arabic was introduced to make it easy to recite the Holy Quran.

Translation of the Epigraphy

This first epigraphy similar to the second epigraphy

Here this Arabic letter was written without dotting, its meaning is: “Mr. Abdul Rabb Awarded to him”, (منح له سيد عبد الرب), (Manehe Lahu Sayyid Abdul Rabb), Early Arabic writing had been included without dots. The dots found today in Arabic writing were one of the first innovations that came after the spread of Islam. These dots make it clear what consonant is to be pronounced. Before the dots, people read the text without any dots. They could do this through their experience. Arabic Writing has been using dots since the dotting system was first inventedby Abu al-Aswad Al-Du’ali ( 603–688 A.D) to prevent grammatical errors. He was a close companion of fourth Khaliphat Ali bin Abi Talib and grammarian. He was the first to place dots on Arabic letters and the first to write on Arabic linguistics.