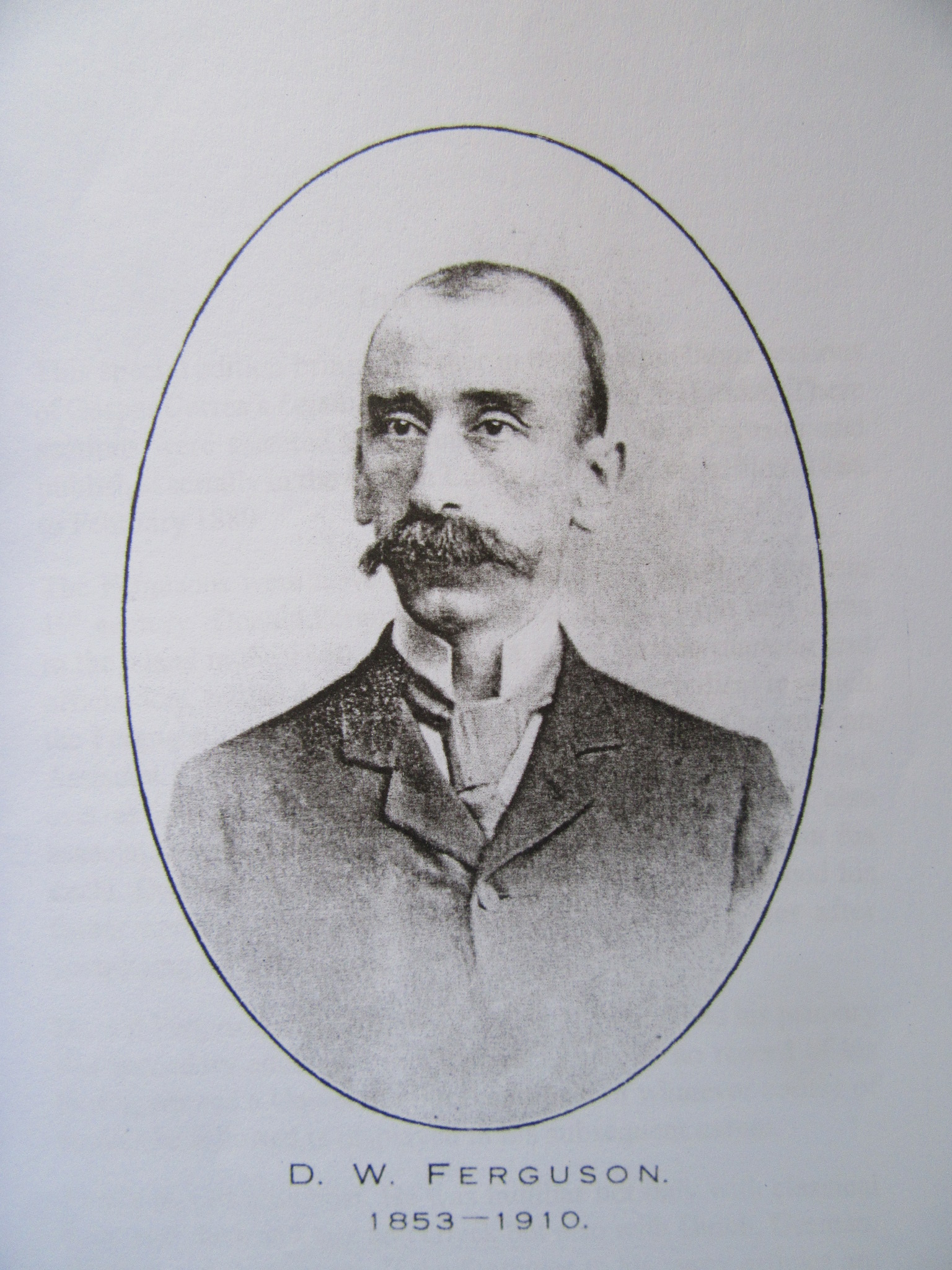 Historical researches undoubtedly require reference to original sources; at present much of the original literature on Sri Lanka both local and foreign have been reproduced and translated into the present vernacular. This tedious task has no doubt aided the modern student of history to dig through original works of literature with much ease. Contributions of Donald William Ferguson in the areas of Portuguese history are a landmark in scholarship in the country and there is scarcely a student or writer of Sri Lankan history who has not benefited by the penetrating researches of Donald Ferguson.

Donald Ferguson was part of the well-known family of Fergusons in the profession of Journalism. His father, A. M. Ferguson was from Ross-shire Scotland and arrived in the island in 1837 aboard the same ship carrying Sir Stewart Mackenzie who was to take up duties as the new Governor; He had tried his hands as a Planter, a Customs Officer and a Magistrate and finally joined the weekly newspaper Observer as co-editor along with its proprietor Dr. Christopher Elliot in 1846 and subsequently became its sole proprietor and chief editor. He was joined soon after by his nephew John Ferguson as Assistant editor who is famously known for the Ferguson Directory.

Into this family of journalists, Donald Ferguson was born in Colombo on 8th October 1853 to Alastair Mackenzie Ferguson and Anne Mackerras. He received his primary and secondary education in England at Highgate and Mill Hill where he acquainted himself with the classical languages of Latin and Greek but also with Dutch, German, Portuguese, Spanish, Italian and French. He also made familiar of himself with Sinhala and Tamil. After completing his studies in the United Kingdom he pursued a journalistic career in Ceylon focusing on the history of the island and joined his father and cousin on the staff of the Observer as Assistant Editor. He was also the founder and chief editor of Ceylon Literary Register and the Vice President of the Ceylon Branch of the Royal Asiatic Society. His study of the Portuguese and Dutch languages enabled him to focus on the original sources pertaining to Sri Lanka’s history and through his frequent visits to England due to ill health, he was a regular visitor to the British Museum where he copied and translated documents relating to Sri Lanka. His unique access to these original works made him a prominent authority on the colonial history of the island especially the Portuguese period publishing numerous papers to journals especially to the Ceylon Literary Register and the Journal of the Ceylon Brach of the Royal Asiatic Society. In 1893 he retired to England and continued his passion with Ceylon history until his death on 29th June 1910 in Croydon.

“He was indeed a rare type of scholar…his life should be an example and a stimulus to us all and his memory will be cherished with gratitude by this Society” – Vice President of the Ceylon Branch of the Royal Asiatic Society upon announcing his death.

“The quantity and quality of his work, which would have been great for a person of vigorous health, were truly surprising when one remembers the condition under which that work was produced” – extract from the first number of the Third series of the Ceylon Literary Register.

This is the library of Donald Ferguson which is now in the Peradeniya University Library. (The following is referred from the article on the Ferguson collection by N. T. S. A. Senadeera from Vol. XXXIII of the Journal of the Royal Asiatic Society, 1991).

Through his studies in the British Museum, he had made copies of rare works for his personal use and finally included a collection of over 300 items including rare books, manuscripts and maps. Apart from main historical books, his collection contains many kinds of obscure and recondite booklets and pamphlets on Ceylon over the last few centuries. With the acquisition of the Ceylon Observer by D. R. Wijewardene his collection known as the Ferguson collection became part of the D. R. Wijewardene Library. As stated by J. H. O. Paulusz “there are two main disasters that can overtake a library of this kind. On the death of scholar, his collection is usually sold to many others, resulting in dispersal. The other disaster is the removal of the collection or its rare contents abroad. Both these disasters were averted from the Ferguson Collection by the wisdom and foresight of Mr. D. R. Wijewardene.”

Identifying the usefulness of this valuable collection D. R. Wijewardene’s initial intention was donating it to the Sangharama and Vihara Trust of the University of Ceylon (now the Peradeniya University)but recognizing its wide appeal agreed that it should be placed within the reach of the whole island and therefore offered it to institutions to purchase the whole collection. As this did not materialise, in his last will Mr. Wijewardene directed his executors to offer it to the University of Ceylon now the Peradeniya University. On 30th May 1951 his lawyers after his death contacted the University and on the 14th August, the Vice-Chancellor accepted the offer and finally, in December 1959 the Ferguson Collection was transferred to the Library of the University of Peradeniya.

In 1948 J. H. O. Paulusz published a 75-page book from the Ceylon Daily News Press titled “The Ferguson Section of Mr. D.R.Wijewardene’s Library” describing 19 books and 4 maps of the Ferguson collection and containing a catalogue of the entire collection compiled by Mr. S. A. Mottau. This small book gives the magnitude of the collection and as Paulusz states, it is a collection put together to serve a definite end that is to promote and facilitate research among the Dutch records and to support the Original material available in the National Archives of Sri Lanka.; the collection in fact is a single unit. The book describes 19 books and 4 maps of the collection varying from early Sinhala prints to Dutch, German and Portuguese travellers accounts.

The comprehensive catalogue in the end complied by Mr. S. A. Mottau is divided by languages in order Dutch, English, French, German, Portuguese, Sinhalese and Pali, Tamil and other Indian languages and Other miscellaneous languages. These are further sub-divided into General Publications, Pamphlets, and reference books and dictionaries.

A breakdown of the catalogue with the language and number of works is as follows:

The list contains Travel diaries, books, Tombos etc with the title of work, author and date of publication. The number of works in the above topics excludes the numerous volumes of the same work which have separate sub reference numbers. This catalogue serves as a valuable indicator of the quality and quantity of the collection and an important tool for the student of history.

His most notable contribution can be stated is the translation of the Decadas of de Barros and do Couto in the title of The History of Ceylon from the Earliest times to 1600 A.D. in No. 60 Vol. XX of the Journal of the Ceylon Branch of the Royal Asiatic Society in 1908. The Decadas were a history of the Portuguese in India and Asia first written by the historian Joao De Barros and later by Diogo Do Couto. Ferguson’s translations are those of the sections pertaining to Sri Lanka and makeup one of the most important Portuguese works referred to by historians alongside the great work of Father Queyroz (The Temporal and Spiritual Conquest of Ceylon). In a period of less Sinhalese literature this work serves as an important source of reference to study the political situation of the island from the beginning of Portuguese rule till 1600 A.D. This work has been the base for all students of the colonial history of the island and who are therefore in debt to Donald Ferguson for making available such a piece of history.

Some of the other important contributions of his were the translation of another Portuguese historical work being the Lendas Da India by Gaspar Correa which focuses on the early period of Portuguese activities in the island and also the correct identification of the date of arrival of the Portuguese in the island which took place in 1506 and not in 1505 as commonly known, this is now accepted by Historians.

Below is a list of all his publications in the Journal of the Ceylon Branch of the Royal Asiatic Society:

“Captain Joao Ribeiro: His work on Ceylon and the French Translation Thereof by the Abbe Le Grand”, Vol. X(36), 1888.

Gaston Perera, Gaspar Correa’s Lendas Da India (Tr) with an introduction by Gaston Perera, Monograph Series No. 01, 2010.  (Appendix I – The Donald Ferguson Collection in the University of Peradeniya Library by N. T. S. A. Senadeera, Appendix III – Obituary Notices on Ferguson’s Death(extract from Obituary Notice in the Journal of the Royal Asiatic Society of Great Britain and Ireland  and extract from the first number of the Third Series of the Ceylon Literary Register))

In loving memory of Dr. Roland Silva, a pillar of Sri Lankan Archaeology

Deshamanya Vidya Jyothi Dr. Roland Silva is one of the foremost Asian experts in the conservation of historical monuments and sites and one of Sri Lanka’s most prominent archaeologists. He was the former Commissioner of Archaeology (1983-1990) and the Founder Director General of the Central Cultural Fund that implemented the UNESCO-Sri Lanka Project of the Cultural Triangle, former Chancellor of the University of Moratuwa, former President of the World Body of Conservators, the first international president of ICOMOS (International Council on Monuments and Sites) from Asia (1990-1999) and UNESCO Chair and the founder President of The National Trust Sri Lanka.
Read more
Bibliography

The student of the colonial history of Sri Lanka has undoubtedly come upon the name of S. G. Perera in their studies. Fr. S. G. Perera, a Catholic Priest of the Society of Jesus was an exemplary scholar of the last century and whose parallels are unheard of. Publishing over a dozen books and over 300 articles in journals, his contributions to the history of the Catholic Church in Sri Lanka and the history of the Portuguese, Dutch and British periods of the island have aided the development of historical knowledge to a great extent in Sri Lanka; what could be called his magnum opus, the translation of the ‘Conquista’ of the 17th century Portuguese historian Fr. Queyroz, is the single most important Portuguese literary work which is the basis for any historical study on the Portuguese period. His proficiency of the Portuguese language gave him access to numerous original sources which he has translated and made available to the public is part of the wonderful legacy of this great historian of Lanka.
Read more