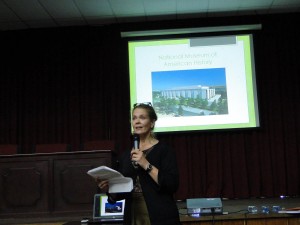 Dr. Karen Lee: Curator from the Smithsonian MuseumThe transcript of the public lecturer deliver by Dr. Karen Lee at the National Museum, Colombo on July 24, 2013 organized by the American Center, Sri Lanka.

We’ve come together tonight to talk about museums and their power to transform.

This word ‘transform’ is interesting–a 2-way street really– not only CAN museums transform the lives of people who visit them, but they can also fundamentally change the staff who work in them—the people who care for the collections, care for the visitors, decide which objects to display and how to interpret them.

As people who care about and for museums—we are responsible to sort of a higher calling. In 1945, UNESCO was created to advance the concept of world heritage of mankind. But before UNESCO, ancient civilizations were inherently curious about objects made by other people and began collecting, sharing and learning from them. Julius Cesar was a coin collector—well lets save the topic of coins for a later discussion but it is reassuring to know that people have always been interested in—people!

I smile looking around the room at you all— because I can see I am with friends—in English, we say “among kindred spirits”.

Thank you for this wonderful opportunity to spend some time together—I feel my life has already been transformed because of you—we have a special chance over the next couple of days to discuss and dream and create—the future of these places—museums—which  we love so much.

People who work in museums tend to be quite passionate— for good reason because it IS our passion that carries us to the future.

You can see I’m a little emotional about my subject but after thirty years of working in museums, I have learned that we cannot be passive about them.

We must love them, use them and strive to exceed expectations with the work we do in them.

But museums can be complex places—we don’t all share the same opinions –and not surprisingly, nor do the visitors who walk through our doors. So how do we embrace complexity and serve the diverse needs of 21st-century audiences and staff?

We live in an era of unprecedented…. Technologic….. Change — cell phones, instant messaging, digital pictures—allow us to ‘communicate’ at phenomenal speed ALL THE TIME.

Moving from books to the internet has fundamentally changed our expectations about business, academic and social interactions but more dramatically, it has actually changed the people using it.

After nearly three generations tracking topics like ‘teens and technology” or “children and cell phone usage” researchers are seeing differences in the brains of kids who were “born” into the internet and the new communication technologies it has spawned.  These brain changes not only affect how people think, but how they interact.

For example, kids who’ve grown-up with the internet receive and process information differently. Their brains tend to automatically skim surface information with speed and exactness but they don’t go deep. Their ability to focus has been traded for fast volume-data processing.

Museums—which historically have expected patrons to “give their full attention” must begin to understand that the kids who visit today have significantly different learning styles than say, their parents or grandparents

Another case in point —Smart phones. They give us the internet in our pocket—and the excuse to stop memorizing. In his book “what the internet is doing to our brains” Nicholas Carr delves into how the internet is changing the way we read, think and remember. If we carry a gadget with us that’s always on and—-is always ready to answer a question, why do we need to remember anything? Serious debate buzzes over these topics.

And what about the new languages that have been introduced because of text messaging?

Combinations of single letters translate to entire sentences—sophisticated ideas become reflected compressed code ….but for people like me who until recently refused to use a cell phone—we’re lost in this new symbolic communication and even sometimes feel oppressed by the challenging pace of the world around us.

But this world of rapid-processing and cell phone dialects is normal for kids today. If you’re 30 and younger, your world is likely to spin at a faster rate than those of us who are older.

Which brings me back to museums and the question of how we reach new audiences, speak new languages—both literally and symbolically—so museums remain relevant in a rapidly changing world.

Well, this might be a good time to tell you a little about the museum I work in…which is one building in a large cultural complex named Smithsonian Institution.

In 1838, the United States government received money from the estate of a British scientist  named James Smithson—who had never visited America but wrote in his will that he wanted to fund  an Institution for the Increase and Diffusion of Knowledge.

And so, the Smithsonian was born…starting with the Castle building and now containing more than 19 museums in Washington, DC and dozens  of research  facilities around the world.

But despite being the world’s largest complex of museums, I will tell you honestly that the Smithsonian now struggles to redefine its mission, and to reinvent itself.   The world no longer needs a  “Treasure-house of Knowledge” where the ‘information-starved public or a budding researcher” could mail a letter with a question about  any topic and receive ‘state-of-the- art’ information in the form of a scientific publication, booklet or letter.  =

We also served society through our museums and

Today, more than 30 million people visit Smithsonian museums each year—but why and what are they getting from us?

Visitor research tells us very few people ever grasp the meaning of our exhibitions. We fall short of engaging them in meaningful exploration of new ideas.

Is this because the staff doing the work are not fully engaged; because younger visitors bring different expectations—perhaps a combination of these and other factors?

I’m not sure but after nearly 200 years of conducting business as usual—we’re attempting to reinvent ourselves and how we showcase the work we do.

We hired a marketing firm to help us figure out how to communicate our mission to the public. As you might imagine, many curators dislike the results of this effort and our new “seriously amazing” marketing campaign.

Luckily the Smithsonian is not alone on this journey to transform itself. Museums around the world seek to reconnect with their power –the power to engage new audiences in a changing world.

The process of grappling with how museums thrive in a changing world is not without its rewards—many of our colleagues are sharing experiences—both positive and negative.

What bubbles to the surface of this global conversation in seeking the new power of museums?

Is that we ARE shifting our missions and we’ve found strength in doing so.

We’re moving away from “me” thinking to “we” thinking. We’re hiring more diverse staffs and working with local communities so that the work we do reflects a wider view of human experience.

We’re shifting management from status quo to informed risk-taking and shifting communication from suppressing differences to welcoming them.

By changing how museums are governed and managed, we’re expanding the possibilities about how they become the vibrant places we want them to be.

At the heart of this reinvention is the recognition that for museums to survive into the 21st century, they must become places of shared stewardship, inclusion, curiosity and collaboration. This call to action was sounded as far back as 1917, when American museum director John Dana Cotton published his thoughts in “The Gloom of the Museum”. What Cotton noted nearly a century ago has even more potency today—that museums cannot base their success simply on the strength of a collection, size of a staff or number of people who visit.  We must move from a “me” perspective to a “we” perspective, and we must chose objects for their ability to spark society—we call them social objects. Here’s one of the favorites for Smithsonian visitors—the puppet Kermit the frog.

Amazing things happen with the shift from “me” to ‘we’ using social objects.

Objects cease to be simply a destination, they become the process. WE—curators, educators, directors, tour staff—give visitors new ways of seeing and interpreting them. We propose multiple perspectives and give multiple points of entry to our story (slide—women)

We welcome new audiences and stakeholders to the story. Inside the museum, new communities are invited to collaborate;  staff take calculated risks together knowing that they are safe in doing so to accomplish the “we’ mission.

Outside the museum, communities of diverse ethnic, religious and economic backgrounds share a stake in the future. The mood isn’t quite as chaotic as a festival but the spirit it there!

After all, museums are just buildings and no matter what treasures they might contain, a building is inanimate until people bring it to life.

So museums of the 21st century are places where everyone is welcomed, where exhibitions with real objects offer a delicious alternative to the flatness of the internet; and where staff care as much about why we do something as how we do it.

Museums of the 21st century no longer use a rear-view mirror to glimpse life as it passes by, we are the community and the community is us.