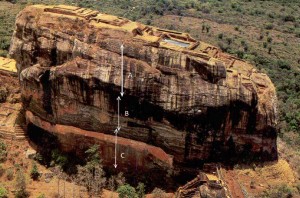 Sri Lanka is well known for its richness of archaeological sites. As described in the great chronicles of Mahavamsa (300A.D.), Thupavamsa (300-600A.D.) and many others, such places are not restricted to one particular region or place and they are scattered all around the island. During the past 2500 years of written history of Sri Lanka, earth materials have been used to build up ancient cities, royal palaces, and mighty irrigation systems. Not only that, tangible evidence from archaeological sites and museums confirm the extensive use of stone materials by ancient people for their day to day requirements. Scientific identification of such materials is essential to understand and interpret ancient technological developments, trade, and cultural evolution.

Geological knowledge has been commonly applied in the field of archaeology for a long time in a  global context (Renfrew 1976; Rapp & Hill 1998; Goudie 1987). In contrast, such geological studies on archaeological sites of Sri Lanka are quite rare, although it has only been around forty years ago from the establishment of geology in the country. As seen today, the lack of interest of researchers in both fields might be the main reason for this aloofness. Insufficient geological knowledge on archaeological sites has resulted in misleading explanations and use of incorrect terminology among historians and archaeologists.

However, it is well understood that comprehensive background knowledge on the geology of archaeological sites is a present-day major requirement. This study was carried out to fulfill that requirement and to give a baseline of information for future research and interpretations.

As stated at the beginning of the paper, the work so far carried out is not conclusive. There remains much to be done. For example, it would be useful to compare this graffiti with the drawings of ships shown in Dutch period maps of Ceylon, India and Indonesia. In addition, any dates arrived at with regard to the wall paintings on which the graffiti had been drawn, would have to be taken into consideration. In conclusion it is wished to invite scholars with specialist knowledge to build upon the foundation laid and carry this fascinating line of inquiry further.
Read more
Research Paper

Commencing in 2008 with a focus on caves in metamorphic terrains, the project Cave Science Sri Lanka has investigated forty-eight caves. Thirty-seven caves have been mapped by the Sri Lankan members of the project, twenty-five have been investigated in more detail and samples have been collected from twelve caves for analysis.
Read more
Research Paper

Gem beads are attractive objects used not only for bodily ornamentation but also to decorate royal palaces and religious places in ancient time. The Jetavanaya Bead collection contains considerable amount of natural gem beads which are made up of gems coming from six main gem families found in Sri Lankan gem fields. The most common gem beads are made up of Garnet and Quartz family gems while Corundum, Beryl and Feldspar beads are somewhat rare in the collection. Having both unfinished beads and raw materials give an idea that beads had been made locally. The different shapes, well polished facets and sharp edges of beads evidence the advance ancient technology of bead making.
Read more