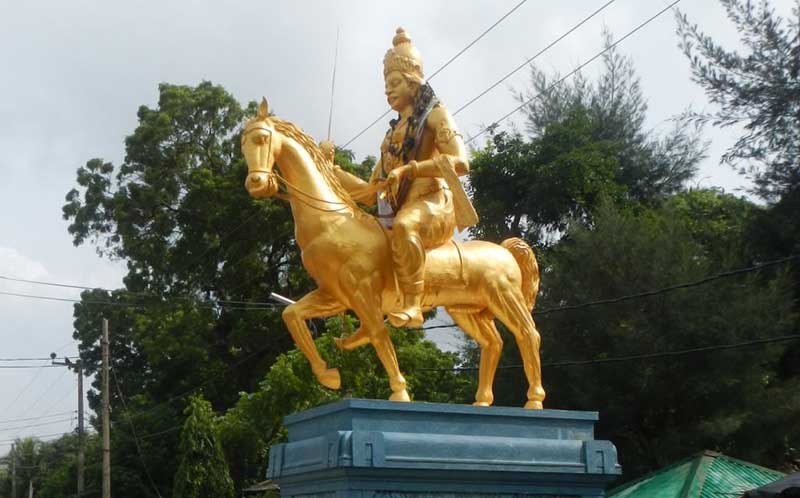 History records King Sankilli II as the last Tamil King of Jaffna whose defeat at the hands of the Portuguese in 1619 lead to the annexation of the Kingdom of Jaffna to Portugal. But a closer examination of historical facts proves otherwise. History states that the invasion of Jaffna by King Senerath of Kandy in 1629 as the last battle for the Jaffna Kingdom from which the Portuguese had to wrestle it back.

This historical approach is made against the Tamil separatism argument justified by the Vadukoddai Resolution of 1976 by the Tamil United Liberation Front (TULF) stating that the Tamils handed over power to the Portuguese, the Portuguese handed it over to the Dutch and the Dutch to the British, therefore the British should have handed over power to the Tamils to run Jaffna as an independent nation instead of handing the entire country into the hands of what they call “the Sinhala state”. This historical argument became the corner stone for the separatist. The origin of this thesis goes back to Judge Weeramantry’s legal move to blast the base on which the Tamil theory for a separate state was based. History has been altered for the political agendas of the separatists in keeping with the Vadukoddai Resolution; ownership of history was a prime condition to prove ownership of territory thus alternate histories have been arguing that the Tamils were here from the ‘dawn of history’. The argument here is that those who came first have a greater legitimacy and supremacy than those who came later, this is spurious argument. If so then the Americans and Canadians must hand over their Nations to the first people, the original settlers.

One way of redeeming the nation from the ethnic impasse is to disentangle the threads of history that have distorted the political realities. It is into this context that this historical approach backed by historical facts is presented. King Senerath of Kandy for strategic and economic reasons launched an invasion of Jaffna with five thousand men under the command of Atapattu Mudaliyar in 1629, the advancing Sinhalese forces were backed by the people of Jaffna and ravaging through the region confined the Portuguese to the Fort and laid siege to it. This fact is stated by several Portuguese historians including Queyroz and Ribeiro and further states that even taxes were collected. Although this invasion failed which resulted in the destruction of the invading force including Atapattu Mudaliyar, this blasts the politico-legal myth that the sovereignty of Jaffna was passed on to the Portuguese by the last King Sankilli II and therefore the British should have handed back sovereignty to his descendants, the Tamils. But history records the last King of Jaffna was Senerath King of Kandy. And as Senerath was the last King to fight the last battle over Jaffna there could be no doubt that sovereignty passed over finally from the Sinhala King to the Portuguese. The main mission here is to present the audience with evidence for them to evaluate.

You can read more about this following this link.

The Power of Museums