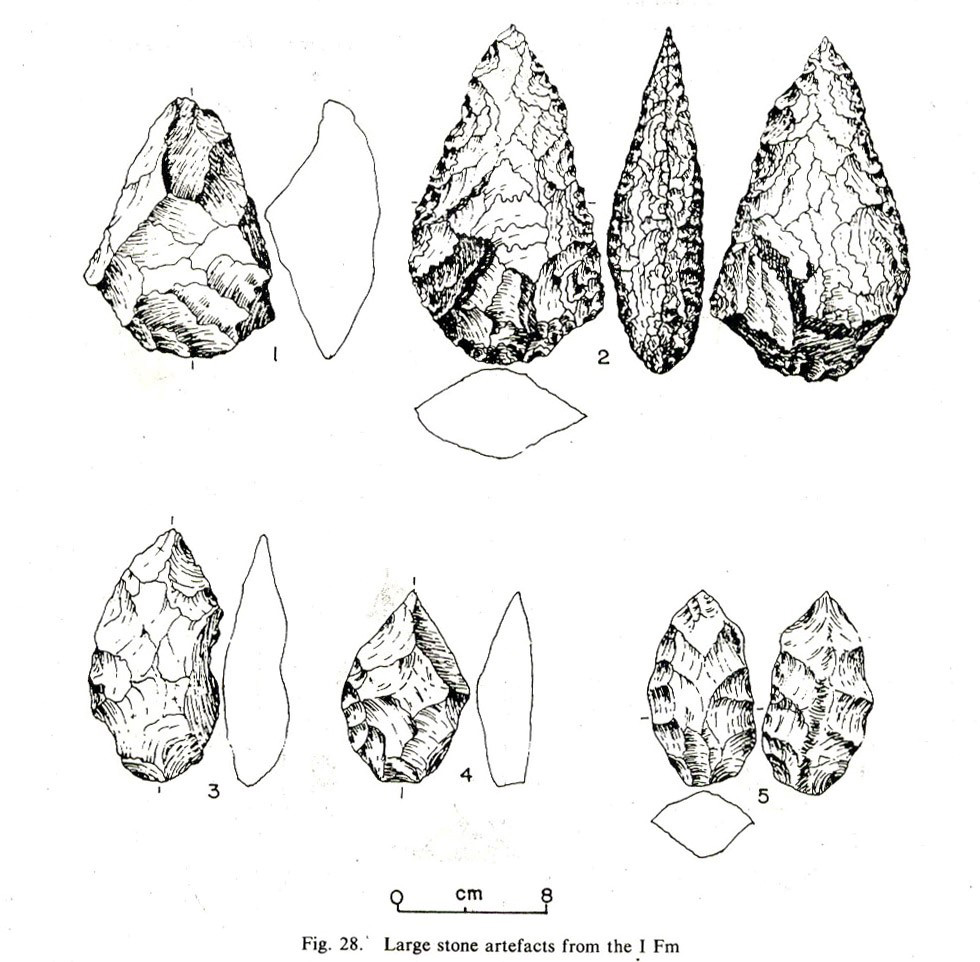 Prehistoric archaeologists further study the beginning of the Paleolithic period as a separate period called the Eolithic period which means the very first period of the beginning of the Stone Age. Although there was no use of human intelligence to craft and shape stones during this time, they had used the naturally occurring stones for their own purposes such as to fight off enemies or to crush different things. The use of stones without pre-preparation to break fruits from trees even at present could be stated as an example for this. Out of the rocks believed to belong to the Eolithic period, the usefulness of rocks weighing above 5kg has been questioned by archaeologists. However at present archaeologists and anthropologists consider the Paleolithic period as the beginning of human culture.

Evidence of the Paleolithic period has been found in countries of the African continent, from Europe, and from India. But the lack of proper evidence from Sri Lanka on this period has been an obstacle to archaeologists till recent times. During the early period of prehistoric research in the island, that which was during the colonial period, from amoung the stone tools collected by different people at different times, some stone tools were stated as belonging to the Paleolithic period or the even earlier Eolithic period. As this information was not based on proper studies of the artefacts and as this data is not in line with the now expanded knowledge base of prehistory, it is hard to take their ideas into account.

As Dr. Siran Deraniyagala has shown, the data on prehistoric man could be found in 3 types of deposits in the island, they are 1) the Ratnapura river basin deposit of the lowland wet zone, 2) the coastal alluvial deposits and sand dunes of the Iranamadu formation in the semi-arid zones and 3) the rock-shelters and open-air sites of the lowland wet zone. Out of these the second category, the gravel layer along the coast of the semi-arid zones belonging to the Quaternary period is one of the most important locations that yields prehistoric evidence. Due to erosion these deposits have turned from a dark red to a reddish brown. This deposit which is spread in a large area was first identified by E. J. Weyland as Plato deposit and later known as the Iranamadu Formation – IFm.

This is an Eleonite layer which is thought to be decayed ancient sand dunes. Within this layer could be found minerals such as feldspar, garnet, pyroxene, and amphibole constituents. Geologists believe it is due to the chemical reactions of these that have given this layer its red colour and other features. But imaginary ideas and folk lore of the people state the features of this layer are due to the works of a supernatural human of the past.

This formation identified by archaeologists as the Iranamadu Formation can be found on the coastal areas of the Northwest, North, Southeast and South of the island. The red colour soil formation at Ussangoda was subjected to many studies by local scholars. By concretion and structure a similar formation could be found on the Indian mainland along the East and Southern coast known as Terri sites by Indian scholars. Comparative studies on the Terri sites and the Iranamadu Formation have shown similar geological and chemical structures.

Places where the Iranamadu Formation could be found:

– Along the Northwest and Northern coast from Pallama to Pulmaduwa.

– Along the Southeast and Southern coast from Ambalanthota to Pothuvil Komari

Research into the dating the age of this soil formation was begun in 1972 by the Archaeological Department under Dr. Siran Deraniyagala. Although the Iranamadu formation was explored as a whole, special studies were conducted in 50 identified sites. Through these surveys it was dated to be between 250,000 to 125,000 years old based on the environmental and prehistoric Paleolithic evidences.

Some of the important locations studied by Dr. Siran Deraniyagala is mentioned below:

Through these explorations and investigations it could be stated without doubt that there were prehistoric settlements more than 125,000 years ago. The most important evidences were found along the coast of Bundala. These prehistoric human settlements belonged to the Middle Paleolithic period of stone technology based on the Quartz and Chert stone tools found there. This sand and gravel layer from further studies has shown to be between 250,000 to 500,000 years old.

It is important at this point as the writer believes for a brief summary on the archaeological excavations that yielded these finds. Below is a summary of the excavations of two locations of the Iranamadu Formation in the Bundala area (Bundala-Wellegangoda – 49c & Bundala-Pathirajawela – 50a).

The gravel layer of this location in southern Sri Lanka is at present about 8 meters above the present sea level and covered with a sand layer of about 4 meters thick. An area of 1.8 x 1.8 meters was excavated here by Dr. Siran Deraniyagala and several layers of soil were identified which contained traces of human settlements. The stone tools found amoung the 3 main soil layers identified here have deteriorated over time and thus made it hard to study their special features; but they were clearly identified as prehistoric stone tools by archaeologists.

The stratigraphy at site 49c is as follows; this information is taken from the work  Prehistory of Sri Lanka by Dr. Siran Deraniyagala.

III  has been studied under 13 levels, this layer is approximately 400 centimeters .

II – the gravel foundation with about 6-15cm in depth.

The basal gravel layer in this region is about 15 meters above the present sea level. Through assessment under absolute chronological dating this level was dated to 125,000 years old. Through archaeological excavations conducted here, stone tools belonging to the Paleolithic period and dating to around the same time period were found. Prof. Sinvi of the Physics laboratory of India examining the soil layer found above the gravel level under the PL dating method has dated it between 74,000 – 64,000 years old. Amoung the stone tools found from this gravel layer, non-geometrical quartz microliths too were found. Studies in this location have shown that a meter of the soil level would have taken 3,500 years to form, therefore according to Dr. Siran Deraniyagala’s assessment; the lower most level of this soil layer could be more than 500,000 years old.

The stratigraphy at site 50a is as follows:

Through this excavation no other cultural or anthropological evidence was found apart from the stone implements. The tropical climate that prevailed in this region has completely erased all such traces. On the other hand during the excavations, sensitive methods that could have unearthed delicate evidence such as pollen was not used during this excavation and thus would have obstructed the finding of such evidences. However with the guidance of Dr. Siran Deraniyagala and International support through the Department of Archaeology, a future programme is being developed to investigate these sites using delicate methods of excavation.

During this period, the population density in the dry zone was thought to be 0.8 – 1.5 per square kilometer whereas the wet zone would have had a population density of 0.3 per square kilometer, hence in comparison with the dry zone, the wet zone would have had a low human population. This data has been taken from the information of the hunter-gatherers of South and Southeast Asia.

According to the archaeological investigations into the Iranamadu Formation, at least during the last hundred thousand years, during the warm periods there was a wet climate with heavy rainfall and during the cold periods the climate was a dry.

No evidence of plant remains that could have made up their diet was found thus no idea can be formed on their dietary habits. This is because as stated above, due to the tropical climate no such traces could have survived and also as mentioned earlier through these excavations no proper samples of such evidences were looked into.

As stated in the beginning of this article, the region of the Indian subcontinent has yielded much evidence on the Paleolithic period and amoung them are not only stone tools but also human remains. And it can be assumed that animals and even humans migrated between Sri Lanka and mainland India through the land bridge which joined the two landmasses. It is the idea of geologists that during the last million years, for at least 800,000 years due to the reduction in sea level India and Sri Lanka would have been one landmass.

Dr. Siran Deraniyagala has stated many years back that the sand dunes found along the coast in the North and Southeast may contain evidence of prehistoric humans of more than 300,000 or even 500,000 years old.

Due to new evidence found from the Jaffna area in 2010 the arrangement of the Paleolithic period of Sri Lanka has been transformed. In 1984 Prof. S. Krishnarajah had excavated a place known as Vivaparimalai in Manipai area near Point Pedro and found several stone tools. These stone tools were identified as Hand axes and were made of Chert. The place where these were found is a location of limestone caves. Until 2010 these were not examined properly due to the civil war in the North. But after the war during an archaeological survey of the area these stone tools were shown to Dr. Nimal Perera who is an expert on prehistoric stone tools and was the then Acting Deputy Director General of the Archaeological Department. After investigating them he concluded that they were Hand axes belonging to the Acheulean technology of stone tools. Afterwards these were shown to Dr. Siran Deraniyagala and he too confirmed these as Acheulean tools. Accordingly these stone tools dated between 500,000 to 1.6 million years old and are believed to have been made by Homo erectus. Based on this, these could be placed in the Lower

Paleolithic period. Therefore it was evident that the Acheulean culture which has been identified throughout the world had spread to Sri Lanka as well. As the available evidence is insufficient to clearly conclude this, it is one of the Department’s future aims to launch a proper methodical investigation into this.

As stated in this article the earliest human settlements identified are through the Paleolithic period. Accordingly although the Paleolithic period in Sri Lanka is faint, sound evidence could be found through archaeological excavations. However in order to get an acute idea on this period and the humans that lived, more and more archaeological investigations need to be carried out.