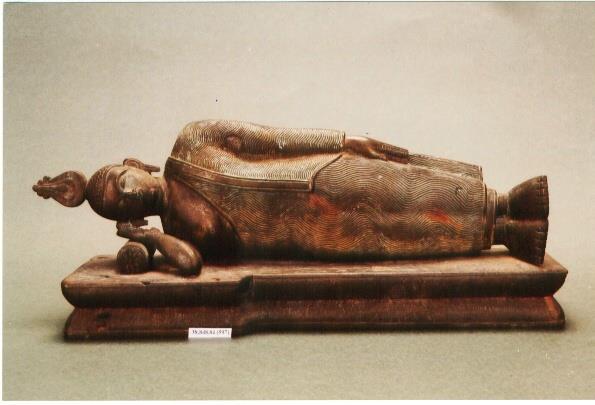 A rich collection of Buddha images belonging to the Kandyan period (17th– 18th Century AD) possessing characteristic visual features and made of different media have been found from the different parts of the country. Among them a significant number of images are made using the metal. This paper intends to study the metallurgy of the Kandyan period Buddha images which in turn gives some light to the metal technology of that period. In addition this paper tries to study metallurgy of the studied icons in relation to their visual features (visual styles). Twenty metal Buddha images which have been attributed to the Kandyan period and now deposited at the National Museum, Colombo were taken for this study (see appendix 1). These images have been classified as belonging to the Kandyan period mostly by art historical means such as iconography and iconometry which have undoubtedly been proved as very successful for this task.

Historical information about the ancient road network of Sri Lankais restricted to random records encountered in historical documents and also to information recorded as a result of research carried out during the British administration. This study is based on a recent research conducted with special attention towards the technical aspects of the ancient road system and it's expansion over the island. An attempt is also made to reconstruct the road system that existed from thethird century BC up to 13th century AD.
Read more
Ancient Technology

The location of Sri Lanka in the Indian Ocean opened her many opportunities to interact with foreign trade links at the historical time. Archaeologists have established a knowledge regarding the ancient trade links that Sri Lanka had with the out side world by mostly studying the visually identifiable foreign made archaeological objects such as coins, ceramics, beads etc. in addition to using information from the written sources. It is evident all such foreign made archaeological objects discovered so by archaeologists were finished objects most probably exchanged for local trading goods.
Read more
Ancient Technology

An evaluation on Scientific Investigation of Bronze Tara image from Sri Lanka at the British Museum: A critical evaluation on controversy of its provenance