The ramparts are an important feature in fortifications which serve as the defensive wall protecting the camp or city. Ramparts were used in the ancient world to protect a city, a military camp or a border. Due to the insecurity of the ancient world in comparison to the modern era almost all large urban centers or cities needed fortifications for its defence. The remains of walled cities could be found throughout the world from the ancient cities of Mesopotamia to each and every major civilization up until the dawn of the modern age. In Sri Lanka, the ancient cities of Anuradhapura, Polonnaruwa and Panduwasnuwara too were protected by a ring of ramparts. The city of Kotte was first developed in the late 14th century as a purely military fortress by Nissanka Alakesvara and later developed into a fortified city during the reign of King Parakramabahu VI in the early 15th century.

The city of Kotte was divided into two sections, being the inner city and outer city. The inner city was surrounded by a strong rampart with a moat at the South and surrounded by the lake; while the outer city area was fortified by a moat and rampart from the South which guarded the only land pass to the city. The overall defenses were constructed by Nissanka Alakesvara at the inception but the rampart of the inner city area was constructed by King Parakramabahu VI.

The inner city ramparts were constructed by King Parakramabahu VI in the early 15th century and were made up of laterite (kabook) stones. This inner rampart circles the entire city only interrupted in about 6 locations by inner reservoirs. There were 4 small passes into the inner city from the outside and the principle entrance was the inner city gate in the centre of the Southern ramparts. There were further 6 bastions built along the ramparts with 4 guarding the entrance to the 4 passes and 2 at the main inner city gate. The city was protected by a purpose built mud layer and the lake from the North, the West and the East while the rampart from the South was protected by a deep moat. This moat was constructed only on the eastern section of the South ramparts as the western half was in proximity to the lake which provided sufficient protection.

The outer city fortifications were faced to the South which was the main land pass to the city. It is stated that the outer fortifications were built by Nissanka Alakesvara. It composed of granite ramparts, a moat and 2 bastions and also some bastions built by the Portuguese. The granite rampart to the West would have run for about 190 meters while the Eastern section would have run for about 145 meters. In front of these was constructed on either side of the land pass two deep moats. These moats would have been filled with mud and a thin layer of water. The Nikaya Sangrahaya and the Saddharmaratnakaraya states that the outer ramparts were further protected with iron spikes, various other mechanisms and watch towers.

What remains at present?

Description of the inner city ramparts

This description would begin from the north from Parliament road and would go clockwise from thereon.

A considerable length of ramparts could be found in the Perakumba Pirivena which could be accessed along the Parliament road. When entering the Pirivena, one could see the rampart running across the Temple premises with about 5 meters of rampart to the right and with an opening of about 10 feet leading to the other side of the Temple; it begins again and runs deep into the temple land for about 50 to 60 meters. The remaining ramparts throughout the area have been declared protected monuments by the Department of Archaeology but many encroachments have taken place; the section in the Temple is an excellent example on the encroachment as it could be clearly observed how the neighbouring lands have destroyed the ramparts. The height of the ramparts here is nothing over 2 feet and the width at the beginning is about 5 feet. One could walk along the long section of the ramparts and when moving forward it is evident on how the lands on the left have taken over; the initial width of 5 feet has about 5 kabook blocks, as one walks on this reduces to 3 kabook blocks and soon to just 2. 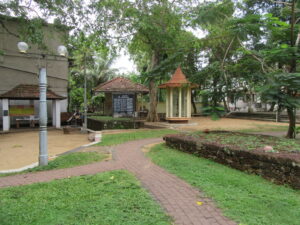 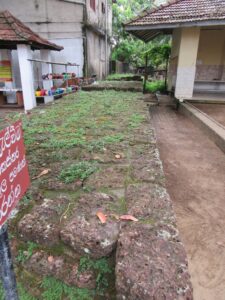 The next section of ramparts could be found down the scenic Sri Lanka Nippon Avenue. The first visible ramparts can be seen few meters after the Mahindarama Temple. From here on the rampart is preserved to a considerable extent running down to the south where it turns left along the inner moat. It runs through home gardens which are in certain places well maintained while other sections are overgrown with weeds and also at certain places it is destroyed for the connecting roads. The initial section here is currently being restored by the Department of Archaeology. The book KOTTE: THE FORTRESS also stats that this rampart would have been plastered over with a section down this road containing plaster. As the rampart here runs through private lands a thorough photo-documenting was not possible. 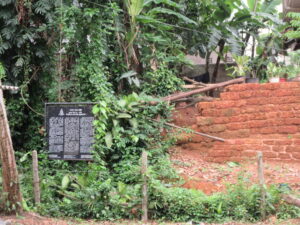 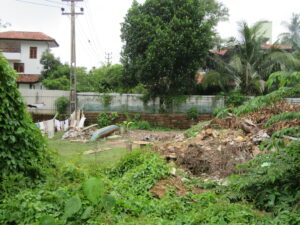 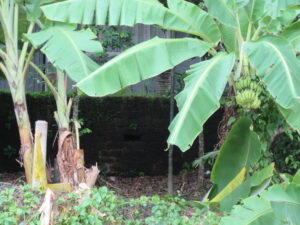 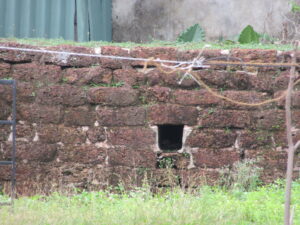 The rampart coming to the inner city moat turns right and runs along the moat. But as the rampart coming near the moat, it turns right; a small section turns left projecting to the boarder of Nippon Avenue. This was according to KOTTE: THE FORTRESS the pier for one of the four passes entering to the city. This initial section is well preserved. Entering to the moat the road crosses on to the rampart and runs along it. Here much encroachment could be seen. As one walks up the ramparts along the moat, it increases in elevation and the great depth of the moat could be seen. From here there is only a single line of kabook bricks indicating the rampart. This section could also be accessed through the First Lane down Rampart Road from Ethul Kotte. This entire section is about 150 meters. It ends at a wall just 2 blocks from the Ethul Kotte road where the inner city gate would have been. Adjoining this block is a new apartment complex and few years back sections of the rampart was visible there but are now lost. 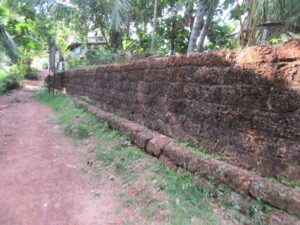 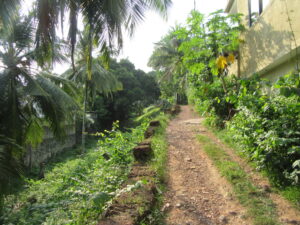 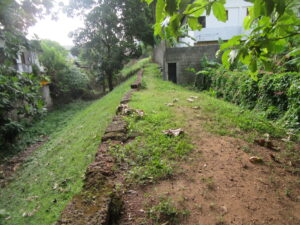 Now going along the South ramparts on the West of Ethul Kotte road a small section could be found in the Salvation Army Church premises. This stretch of rampart is not conserved and many walls of the neighbouring houses have been built on top. This rampart runs towards the west and ends near the Angampitiya bastion from where it turns north, these sections could be accessed along the Angampitiya road. From where the rampart ends in the Salvation Army premises after few blocks it could be traced again for about 20 meters. Arriving down Angampitiya road from the four ways junction turn left along the small road and arriving up to the Sri Jayawardhanapura School Play Ground one would come across the rampart. Arriving near the ground to the left is a high rising ground with trees, this is the ancient Angampitiya bastion and observing it clearly one could find granite stones which have now eroded away. The section from the Salvation Army Church joins here and turns north. This southern stretch is not clearly visible but walking at the base of this ridge through the thick undergrowth one could find the kabook blocks which make up the rampart. 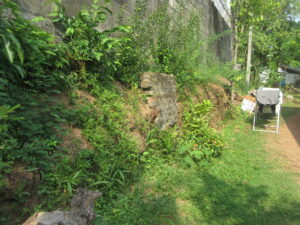 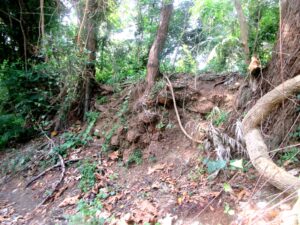 From here the rampart runs northwards with few sections along this road and on the road across Angampitiya road could be seen. 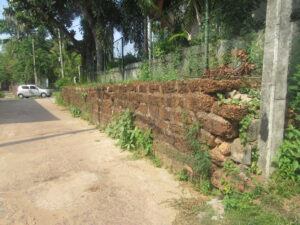 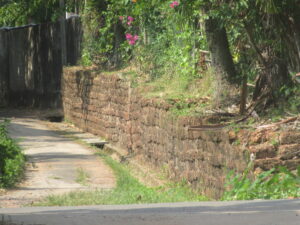 The western side of the ramparts of Kotte is interrupted at 3 places due to the ancient inner reservoirs but at present, after the above described ramparts, no remains of the ramparts or the reservoirs could be traced. A survey by the writer done along all the roads towards the North on the west of Ethul Kotte road revealed no visible ramparts. This area is highly residential and it is most likely that certain sections still remain within few home gardens as the book KOTTE: THE FORTRESS also mentions, but these are off limits for the regular tourist.

Description of the outer city ramparts

The outer city ramparts which were said to have been built of granite blocks is not visible at present. But traces of kabook blocks could be seen along the western section of the outer moat.

Description of the inner city Moat

The inner city moat can be accessed as mentioned above along the Sri Lanka Nippon road or the First Lane down Rampart road. Walking along the ramparts along the moat one could see how gradually the moat deepens. The moat would have been filled with a layer of mud and water thereby restricting access by swimming and also maintaining the height of the ramparts. Scaling the moat from the bottom to the top of the ramparts is a near impossible task as the writer experienced thus adding a superb defence to this place. The inner city moat is found only on the east of the inner city gate and no moat was built on the west as area along the Salvation Army Church is levelled ground. 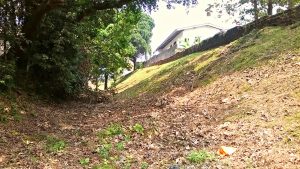 Description of the outer city Moat

This can be found before the Pitta Kotte junction bordering the UNP Headquarters Sirikotha. The moat could be found on either side of the main road. Both sides of the moat are overgrown with shrubs but the great depth of the moat could be seen clearly. This outer moat and rampart guarded the only land pass to the fortress of Kotte and was the scene of many battles. 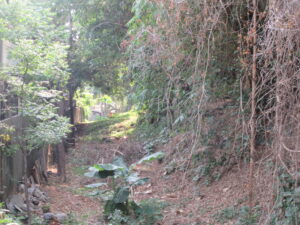 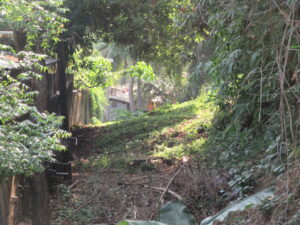 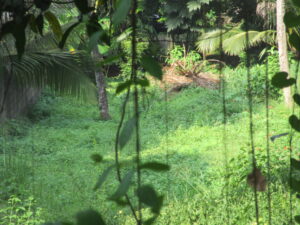 The ramparts of Kotte, as being some of the prominent archaeological sites of Kotte are also the most affected sites due to the encroachments made by residents. Although the Department of Archaeology has declared these as protected monuments, without the support from the residents it is an impossible task to preserve them.

The next article would explore the bastions, the passes, and the lake of the fort…