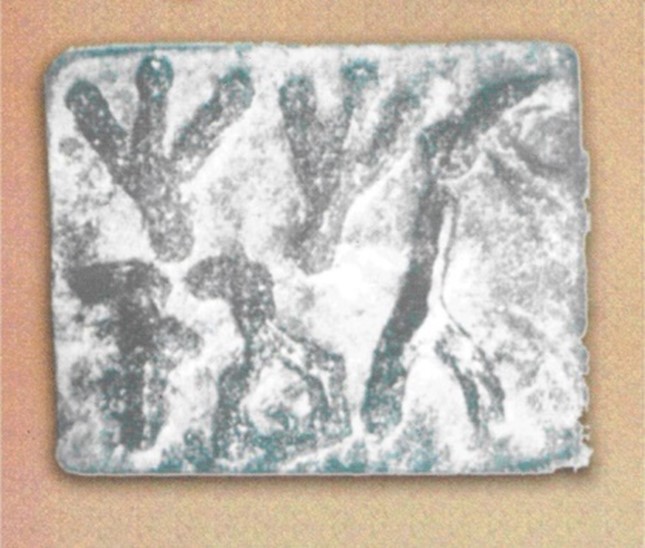 Annaikoṭṭai Seal: Is it Tamil Brāhmī? 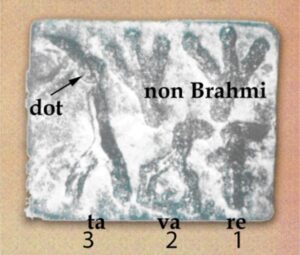 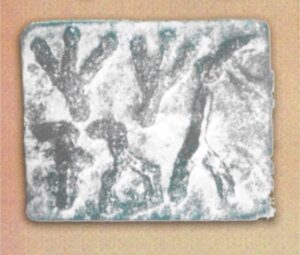 A team of researchers from the Jaffna University launched archaeological excavation of a megalithic burial site at Annaikoṭṭai in Jaffna Peninsula which commenced in 1980. In 1981 the discoverer of a steatite seal with a Brāhmī inscription and some other symbols was a significant milestone. The first attempt to decipher was done by Dr Kartigesu Indrapala of the Jaffna University. His reading was kovetem, which denotes the chief or king. However, overall it was considered as a Tamil Inscription and furthermore a Tamil Brāhmī inscription. This was considered as the basis for firm proof of existence of Tamil Brāhmī inscriptions in Sri Lanka. This matter needs further meticulous careful examination which has arisen of several anomalies. Thus:

This seal is engraved with three non-Brāhmī symbols and down below contain three Brāhmī letters. Indrapala deciphered the Brāhmī inscription as koveteṁ.[4] Apparently, it is to have a meaningful Tamil word, he has sort assumed the dot like section above the third letter as a Brāhmī symbol and therefore, it is accounted as a part of the Brāhmī inscription. He had assumed it as an anusvāra [ṁ] and deciphered it with the last Brāhmī letter [3] as taṁ. If there is an anusvāra as he has sought to assume, that categorically indicates it is not a Tamil inscription.

Seals and sealings from Akurugoda and elsewhere have adduced concrete evidence that a seal could exist without the name of the chief. The epithet chief mentioned it is not precisely specific. When there is an inscription that bears on a seal, it contains the name of the user.

Raj Somadeva has opined that it is keveta, which is the Prākrit version of the Sanskrit word kevarta, which means ‘the fisherman’.[5] Since the objective of using a seal is to authenticate or authorised a transaction, the word ‘fisherman’ may not be the best apposite word. Several other scholars have also proposed several other readings based on their assumptions. Hitherto, the reading of Indrapala prevails as the acceptable reading in epigraphy.

On palaeographical evidence available the Inscription could be dated to 3-2 century B.C., which concurrent with the dating of the site. At the outset, it has been described as a Tamil Brāhmī inscription. It is theoretically accepted anomaly that a Tamil Brāhmī inscription should have at least one of the four Tamil Brāhmī letters. This inscription contains no such evidence. The dating is the other most important factor. It is known that the oldest Tamil Brāhmī inscription is Māṅgalam Inscription which has been dated to the 2nd century B.C. vide fn 3. In the aforesaid circumstances, it is required to look into the veracity of the statement since it indicates Sri Lanka had older inscriptions than in South India. The above assumption could be accepted only if Tamil Brāhmī writing has been first originated in Sri Lanka and not in South India. There are no historical records or archaeological records to surmise such a premise. Sri Lanka has a well-documented history in written form and the authenticity of those records have been established.[6] Accordingly, there is no way to assume that the Tamil community of Sri Lanka is older than their counterparts in India and also has conducted research to develop the language. Furthermore, there are five inscriptions[7] by Tamils during the pre-Christian period. All the inscriptions are in Sinhala Prākrit as the other Sri Lankan inscriptions and their names were also Prākrit, which confirms the Tamils were already integrated into the main stream. like the other similar groups who migrated to Sri Lanka. Accordingly, having a Tamil inscription is a matter to be thoroughly investigated.

Other Anomalies which could be comparatively deciphered

Sri Lanka has over 1000 of pre-Christian era Brāhmī inscriptions in comparison to South India. The evolution of letters due to usage could be assessed fairly precisely. It can be observed with clarity that the letter ka during the period 3-2 century B.C. was a symmetrical cross [Swiss Cross]. A letter similar to the first letter of the seal during that period was ra.

It can also be observed that there are two letters similar to the first letter which is visible in the inscriptions of the 1st century B.C. The present reading of the letter as ka is due to that similarity (Figure 5). 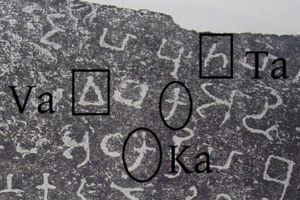 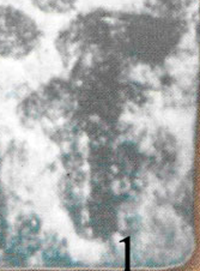 Figure 7: Section of Inscription No 10 (Vol. II): va and ta are in squares and ka in a circle. The first letter is also depicted on the right.

From the Figure 7, the shapes of the three letters in the 1st century B.C. could be identified. There is not an iota of a doubt that the letters va and ta are quite evidently different. The variant letters found in Figure 5 and Figure 6, also looks similar to the first letter of the seal, but are of the 1st century B.C. That means the seal could not belong to the 1st century B.C. and therefore, the letter in question cannot be ka. This is again falls in line with the dating of the site. 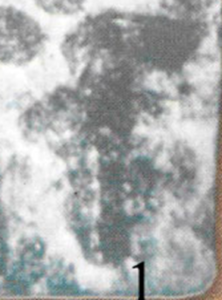 Figure 8: An enlarged image of the first letter

An enlarged image has proved beyond doubt that it is more evident, that the letter cannot be ka in the 1st century B.C., since the ka during that period had a curved lower part. This letter evidently contains no such curve. A careful closer perusal reveals that there is no dash that cuts through the vertical line. On the right-hand side there is no extension of the dash. Perhaps the small dash like thing on the left side is some other distortion that is extended up to the bottom of the letter. The letter looks like a vertical line with a dash at the top which can clearly be distinctly identified as medial e.

Analytical Study: Deciphering of the Inscription

Both Indrapala and Somadeva deciphered the second and the third letters as va and ta. The shapes of letters correspond to the 3-2 century B.C. and the reading could be accepted. Therefore, the first letter also should correspond to a letter in 3-2 century B.C. and the only letter that matches is ra. Such a ra is found in the Figure 3. Since there is a dash to the right at the top it can be deciphered as re and the inscription on the seal can be deciphered as Revata, which is a name found in Sri Lankan Brāhmī inscriptions.[9] It means and denotes the seal belongs to Rēvata [proper noun]. It is also a Prākrit word.

Figure 10: re in Asoka inscriptions

This could even have originated in North India. Therefore, before concluding another aspect needs to be examined with clarity. That is whether the making of the seal was done in India and whether it represents the ka which in vogue in India in 3-2 century B.C. The study of the evolution of the Indian ka is required to re-examine this stance with preciseness. From Asoka Inscriptions it can be observed that the ka is similar in India and in Sri Lanka.

It can be observed from the inscription on the Statue of Kaṇiṣka[10] (Figure 12) that the Indian ka has not much developed for more than three centuries. This categorically confirms that the Indian letters have not taken a rapid change as in Sri Lanka and the letter under reference is even not an Indian ka. [11]

The present study has envisaged that the inscription on the Annaikoṭṭai Seal is not a Tamil Brāhmī inscription. It is a Prākrit inscription having the name Revata [Rēvata], which is a common name found in Sri Lanka and North India.

This seal either could be a Sri Lankan or a North Indian seal, which can be dated to the 3-2 century B.C.

-2006 Standardisation and Pronunciation of Some of the Ancient Sinhala Words, National Archaeological Symposium.

The Origin and the Evolution of Brāhmī Script, (in press)

[3] Early Tamil Epigraphy From the Earliest Times to the 6th Century A.D. By Iravatham Mahadevan, An Overview by S. Swaminathan (http://www.indian-heritage.org/swaminathan/ tamilscripts/index.html#slide) [13/02/2019]

[6] Introduction to Mahāvaṁsa § 2. The Trustworthiness of the Ceylon Chronicles, xii.

[8] All Sri Lankan Brāhmī inscriptions quoted are from Inscriptions of Ceylon Vol. I and II, edited by Senarath Paranavitana, unless stated to the contrary.

[9] Revata was one of the monks who spearheaded the second council (Dīpavaṁsa, 4.54-56). For other monks and individuals by that name please see http://www.palikanon.com/english/pali_ names/r/revata.htm.

[11] The fast change in the Sri Lankan script in the 1st century is due to the writing of Tripiṭaka in 89 B.C. (Origin and the Evolution of Brāhmī Script, Prasad Fonseka, in press)

The depository of Tooth Relic during the Cōḷa Occupation of Anuradhapura?