The complete thesis can be downloaded from the university online database scripties.uba.uva.nl after the 30th September 2020.

It was identified that the Dutch fortifications of Sri Lanka were relatively well studied and a good inventory with classifications existed through Jayasena (2002)’s thesis. However, it had not been integrated into the heritage management system of the country and no information existed on the exact locations of sites lacking archaeological remains. Further the literature survey revealed no such landscape based studies of Kandyan fortifications, not even a simple inventory. This is in part due to the temporary nature of Kandyan sites and the lack of attention in academia under the field of archaeology. The study of Kandyan fortifications remain in the field of history and part of overall warfare studies than as a field of inquiry of its own.

In this backdrop the present thesis was undertaken to produce a solid database of all forms of fortifications of both the Dutch and Kandyans through a landscape archaeological approach using a Geographic Information System (GIS) as a spatial database and analytical tool. The objectives were 1) to inventory the data for Dutch and Kandyan fortifications, 2) to build a spatial database through a GIS software and finally 3) to test out the data through the GIS for its analytical capability.

This thesis is an innovative exploratory research. The multi-layered, visual and analytical capabilities of a GIS provide for a landscape approach at correlating fortification sites with the landscape; thus the GIS framework would combine historical sites, archaeological and monumental sites and a new layer of landscape of cultural and natural elements as parameters.

The software used is QGIS 3.10 (64 bit).  Additionally the external Database management software SpatiaLite would be used to store the data.  As this is a first step in building an inventory, the database was built as a non-relational database. There are four main attribute tables of point geometry, two historical sites and two archaeological and monumental sites for the Dutch and Kandyans. For the landscape parameters, based on the limitations in accessibility to data, the natural landscape elements of elevation, hydrography and terrain was selected. For cultural landscape elements, the historical provincial boundaries was selected.

Historical and archaeological data was gathered from primary sources of archival maps, chronicles, memoirs, diaries etc. and secondary sources such as archaeological reports, academic papers and articles and limited field data. Due to the time limitations of this study and due to the restrictions of the COVID-19 pandemic, the historical survey was mainly limited to European sources with the Mandarampurapuvata being the only primary Sinhala source referred to.

Data for natural landscape elements was gathered from open source topographic maps and inland waterways of vector format. Elevation was calculated using contour lines and terrain type for each site was classified based on relief and slope attributes through a simple geomorphographic conceptual model. Inland waterways were used to calculate the proximity of a site to the nearest waterway through two 500m buffers.  Data for cultural landscape historical provincial boundaries were based on historical maps and descriptions and built as a separate attribute table of polygon geometry.

Once all the data was gathered, the data was entered in the records of the GIS attribute tables. For the locations that are known or which are existing, open source Satellite imagery was used to locate and place the point in the vector layer. As for the locations without monumental remains, the first task was to identify the location of the fortification as accurately as possible. This was done through the aid of historical maps and descriptions, contemporary evidence, satellite imagery, and topographical maps. Once possible locations were identified, the point in the vector layer was placed and an arbitrary level of accuracy was included in the record. The final stage of the research was the testing of common landscape elements as parameters for comparative analysis between the Dutch and Kandyan sites for identification of any correlations or patterns. Due to the limited time of the thesis, this was only done as a testing of the suitability of selected landscape parameters and the GIS system.

All sites ranging from large forts to small stockades were noted during the historical survey, however only the sites whose location was identifiable were included in this inventory. The inventory of the Dutch fortifications amounted to 89 sites of which 41 were identified during the study. Of these sites, 20 were identified as Archaeological and Monumental sites and 69 were identified as Historical sites. Jayasena (2002) had further classified these sites into 6 function types and 11 morphological or form types. For this inventory a further Function type – Non-permanent watch-posts and Form type – 12 (single building or smaller stockade than existing Type 11) were identified and added to the existing classification. 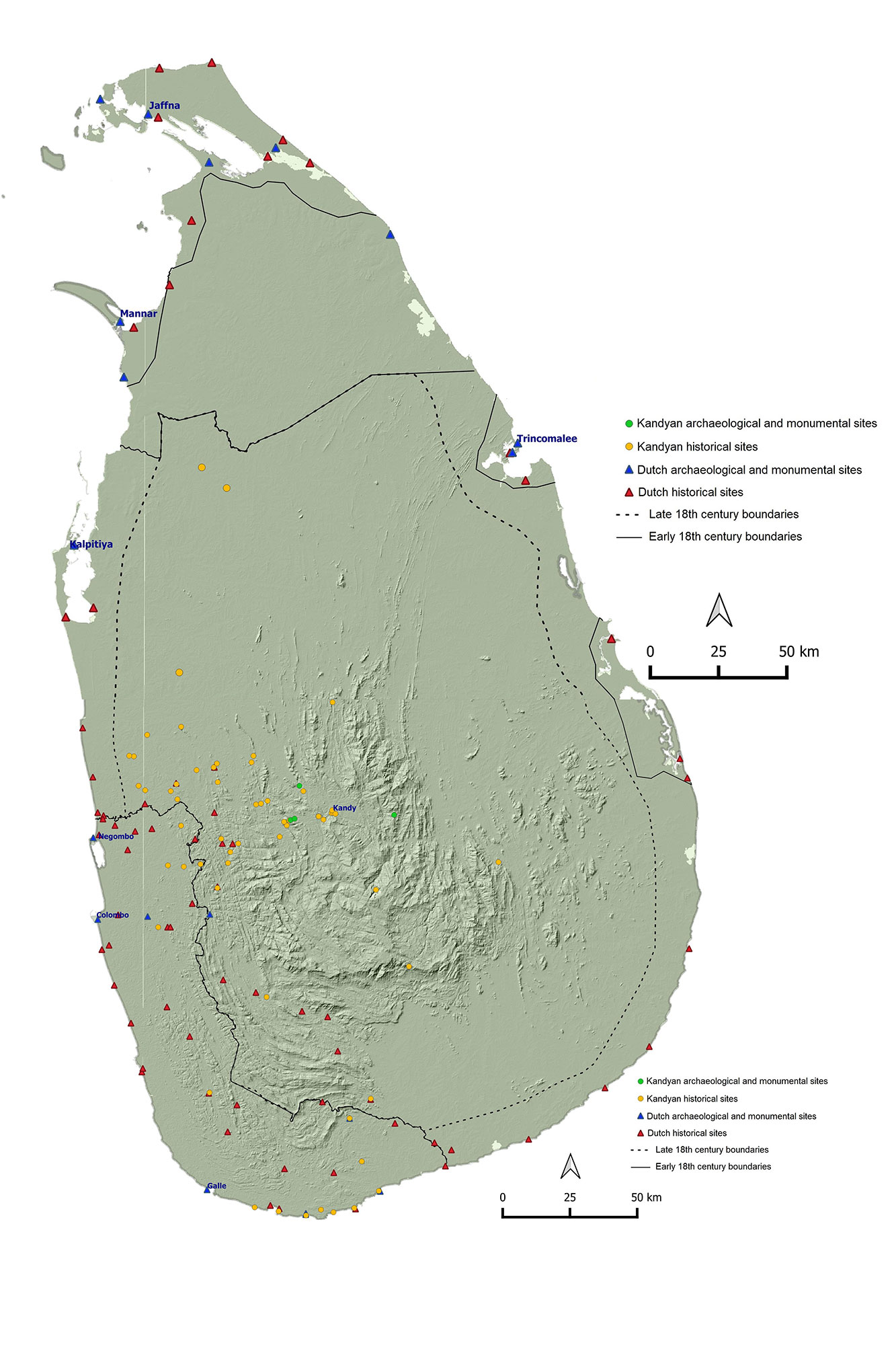 For the testing, a selection of the total sites was made on the function type. The function types, Type W of the Dutch and Type T1 of the Kandyans were left out. This gave a total of 54 sites for the Dutch and 31 sites for the Kandyans.  The results of comparison of Dutch and Kandyan sites of their topographic regions based on elevation was reflective of the geographical positioning of both territories, with the Plain region as a middle ground of contested space where both political entities have a substantial percentages. In comparison of the proximity to inland waterways, while Dutch sites have a higher percentage than the Kandyans in sites located within 500m proximity; when compared by taking overall sites within a 1000m proximity to a waterway, no significant difference can be seen as both entities have over 50% of their sites within 1000m of a waterway.   As for terrain classification, 18 types of terrain were identified for Dutch and 12 types for Kandyan; with four common terrain types, Undulating rises, Rolling low hills, River bank Undulating rises and River bank Gently undulating rises. No significant variation was observable.

(Fig. 63 Frequency graph –comparison of waterways proximity on total percentage % of sites. Sites within 500m of a waterway, within 1000m of a waterway and beyond 1000m)

The spatial database built for this inventory was designed as a non-relational database due to the uncertainty and lack of some data and attributes during the study. With the completion of the database, the potential for relational databases was seen. Further, concerning the natural landscape parameters, it was identified that the proximity to navigable waterways can be seen as a possible improvement and terrain classification could benefit from an automated classification using Digital Elevation Models on two scales for each site which would be better representative of the terrain. The spatial and temporal view of the landscape showed that different sites existed at different times with some being reoccupied after long intervals and that Kandyan and Dutch approaches to fortifications were different, as was the case of the smaller temporary fortifications; where during the 1760s war the Kandyans employed a far greater number of small stockades compared to the Dutch in their offensive and defensive campaigns. A large number of historical Kandyan sites compared to the known archaeological sites indicates a strong potential for archaeological field work. Further, the building of the cultural layer of historic provincial boundaries showed the lack of data in the historical geography of Sri Lanka, and the potential in this respect. Therefore with further improvement in new data such as historical geographical data, complete environmental datasets, etc. this GIS could be refined and expanded for more complex research such as predictive modeling for site location, spatial analysis, and as a heritage management tool for Sri Lanka.

Whatever happened to the King’s mother?