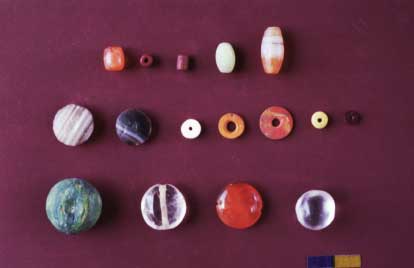 Beads were used as bodily ornaments by ancient people. Bead making is an art and a variety of materials like stones, gems, corals, shells, amber, wood, metals etc have been used since prehistoric time (Dubin 1987). The use of natural materials varied from region to region, country to country and place to place. Later the bead making process has been developed as an industry with better knowledge and advanced technology that created synthetic beads and properly faceted natural beads. After the beginning of long distance trade, knowledge and techniques of bead making were circulated and different kinds of materials and beads were distributed around the world. As a centre for trading in ancient times, Sri Lankan culture was enhanced and gained different techniques, materials and beads from different countries. Sri Lanka is rich in raw materials for making either natural or synthetic beads.

how to get your ex girlfriend back

Ancient chronicles of Sri Lanka have mentioned the use of gems as decorative materials from ancient times (Mahavamsa 300 AD, Thupavamsa 300-600 AD). Gems, are minerals which have specific characteristics. Beauty defined by its colour, degree of transparency, lustre, reflective effect, rarity and durability of a gemstone decide the class of a gemstone, indicating if it is either precious or semiprecious. The main gem varieties found in Sri Lanka are Corundum, Chrysoberyl, Zircon, Garnet, Tourmaline, Beryl, Moonstone, Topaz and Quartz family. Sri Lankan people have used gems not only to create jewellery but also to decorate royal palaces and religious places. One of the best examples is the “Pabalu Wehera” in Polonnaruva which was said to be decorated with beads. There are evidencs of using gems for making beads. In subsequent periods, beads were also manufactured synthetically.