The Fortress of Colombo: What else remains? 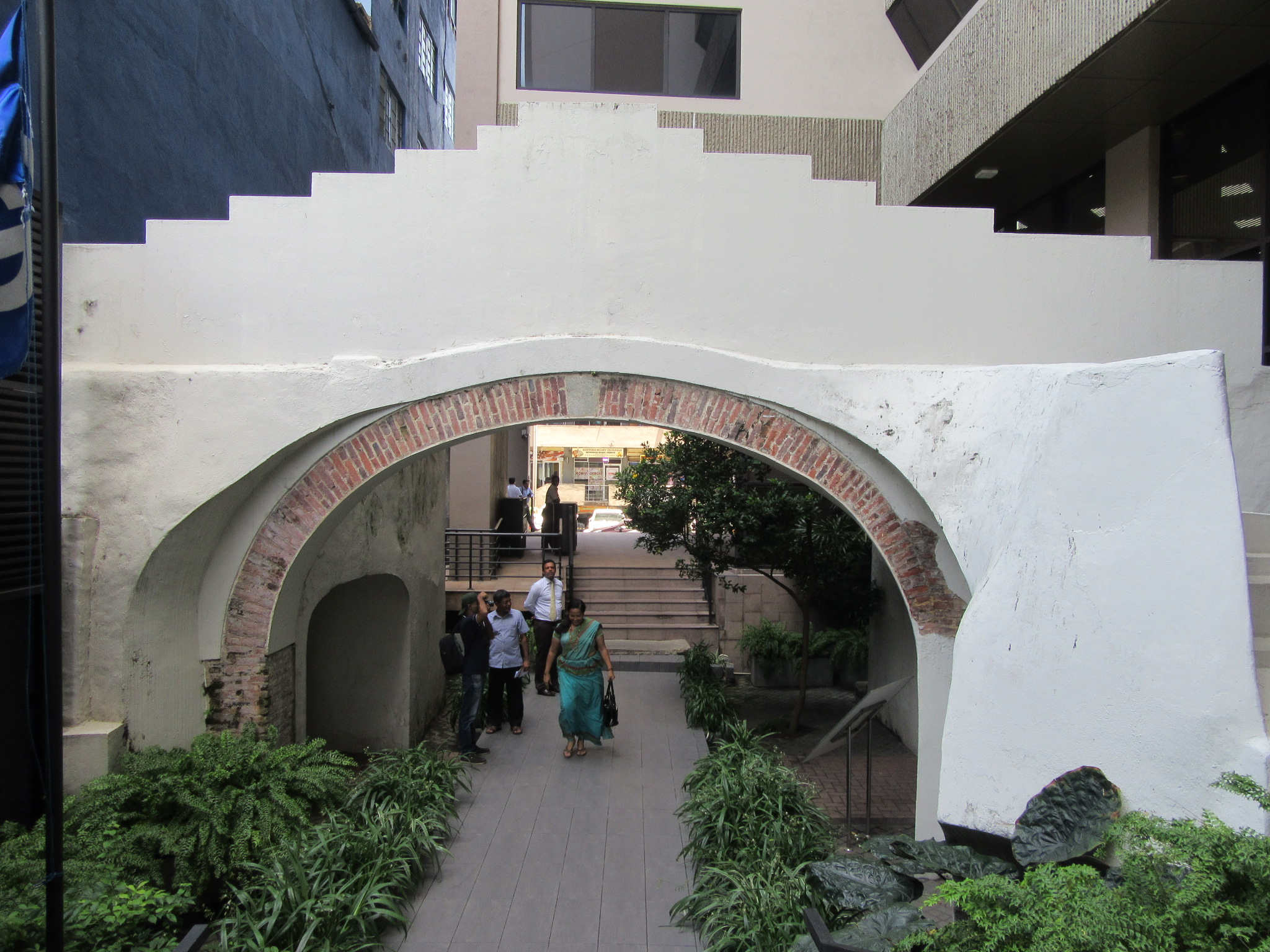 My research into the remains of the Fort of Colombo led me to identify 7 locations in total which all belongs to the Dutch built Fort. The previous article dealt with my identification of 3 sections of the Dutch fort lying within the Navy Headquarters; that is the entire Dan Briel bastion, the Postern gate known as the Slave port and sections of the rampart from Dan Briel bastion to Amsterdam bastion. In this article, I would discuss the remaining 4 locations.

The passion for exploration and history combined can be very fascinating. One does not need to explore unchartered jungles searching for lost ruins to get this experience. The heart that carries this passion  can find it in any environment; in my case, it was a concrete jungle, the well-known and very much alive, city of Colombo. The area of the Colombo fort which was once one entity is now broken down by various roads and private and public buildings thus remnants of a bygone era could be scattered and links joining them to a common history, lost. Thus the remains of the fort of Colombo which once would have collectively known to exist became separated in time and space as Colombo developed into its present form.

These 4 locations I identified on separate occasions. The first of these 4, the Delft gateway is one of the first remains which I came across. This remnant is no secret, and I came to know of it when I began work at the World Trade Center. This can be found in the Commercial Bank premises down Bristol Street. This monument is protected by the Archaeological Department and is well maintained by Commercial Bank, and anyone could freely visit the place.

The Delft gate formed one of the three main entrances to the Dutch Fort of Colombo, the others being the Galle gate in the south and the Water gate in the harbour. This gate was located on the eastern ramparts between the bastions of Delft and Hoorn and opened up to the Pettah which was the residential area of the city known during the Dutch times as Oud Stad or Old City.

The Delft gate was entered upon from the Pettah by crossing the moat using a draw bridge, and a curved passage way to the right gave entrance to the fort. On either side of the gate was one continuous building which housed the guards. The reason for the curved passage way was to avoid direct fire from the outside to the interior of the fort in case of an attack.

What remains at present is the latter part of the interior of the gate opening inside the fort, and the curved passage way could easily be traced. This is the only section of the fort that remains on the east of the fort if bisected from York Street.

The second location is the remains of the wall of Battenburg battery which can be found inside the Harbour. This section is also known to the Archaeological Department. I came to know of this section through a Television documentary made a few years back and with the help of my cousin brother we gained access to the harbour to see it.

The Battenburg battery was one of the two gun batteries built by the Dutch on the harbour arm that stretched into the sea. A gun battery is an arrangement of guns protected by a wall and does not contain any distinctive shape unlike the bastion and is built independently of the fort. The Dutch built these two batteries, Battenburg and Waterpass on the harbour arm to cover the approach from the sea and linked these two to the main fort through two lines of fortified warehouses. The Battenburg battery was the only section of the Dutch fort to be continuously used in warfare even after the demolition. This was used by the British as one of the four gun batteries which protected Colombo up until the Second World War where the British had installed six inches breech loading coastal artillery on it.

All that remains now is a seaward section stretching for about 50 meters and is made up of Kabook and bricks with relatively new cement plastering at certain sections. What is exposed is the side that would have been open to the sea, the area of which is now all filled due to the expansion of the harbour whereas the side of the wall facing the inside of the harbour is sealed by a concrete wall.

The third remnant of the fortifications of the Dutch fort of Colombo is the fortified warehouse. This is located at the end of Chaitya road and now functions as the Maritime Museum. Linking the fort proper with the gun batteries on the harbour arm were two lines of warehouses known as Pakhuizen which were double barrel roofed in design unique to the Dutch. It was here that all the commercial activities of the harbour took place as one of the main gates, the Water gate was situated in the centre of the north warehouse which opened up to the jetty where the ships would dock. Apart from performing the warehouse function it served as a link to the fort proper and the outer defences and was thus fortified with thick masonry so as to withstand bombardment from the sea.

What remains at present is the south warehouse and is in a good state of preservation, a close examination of it would reveal the heavy masonry in its construction which could have withstood heavy bombardment, its function is similar to that of the Galle fort which is also the Maritime Archaeology Museum where the warehouse forms part of the connecting rampart of the fort. The remains of the north warehouse could barely be traced as it has been completely modified and now serve as the Harbour Master’s Office; interestingly the rock with the Portuguese court of arms can be found in a small garden in front of this office. The remaining warehouse which functions as the Maritime Museum houses a lovely collection of artefacts and models of the development of the Colombo harbour and also several large scale models of wooden warships of different periods.

The final location of the remains of the Dutch fort is a large section of the wall from Enkhuysen bastion and to Dan Briel bastion and is located behind the Junior Police Officers Mess down Chaitya road. I came across this section of the rampart by tracing a plan of the Dutch fort which I superimposed onto a present day satellite map. I had concluded that only six locations of the fort remained and tracing this superimposed map I wished to identify the names of the buildings that occupied the ramparts and bastions for the research paper which I was writing. Coming to this section of the ramparts I walked one evening down Chaitya road after work to find the name of this particular building, which my map showed that the ramparts would have run behind it. Noting that this was the building of the Junior Police Officers Mess I noticed something strange. In one corner of the building was a small canteen with a door opening to a court yard at the back; my eyes, trained to spot anything old from my childhood noticed an old wall. My mind went blank, I thought for a second “could it be…” and walked through the canteen to the back to find to my astonishment the largest section of the ramparts I have yet seen! The distinctive slope of the rampart was quite evident, and it was about 10-12 feet in height and stretched for about 40 meters. It appears to have been plastered over several times as different plastering can be observed.  There is also an interesting stone cut drain jotting out of the wall at a point.

Thus this romantic adventure with the Fort of Colombo made me feel like a modern day Howard Carter and made me realise, even in living modern cities, ruins can be lost and forgotten.

For more details on the remains of Colombo and the list of references, please see my research paper titled “Archaeological Remains of the Fort of Colombo” in the Journal of the Archaeological Society of Sri Lanka Sri Lanka Puravidya Samhitha Vol. 6, 2016.