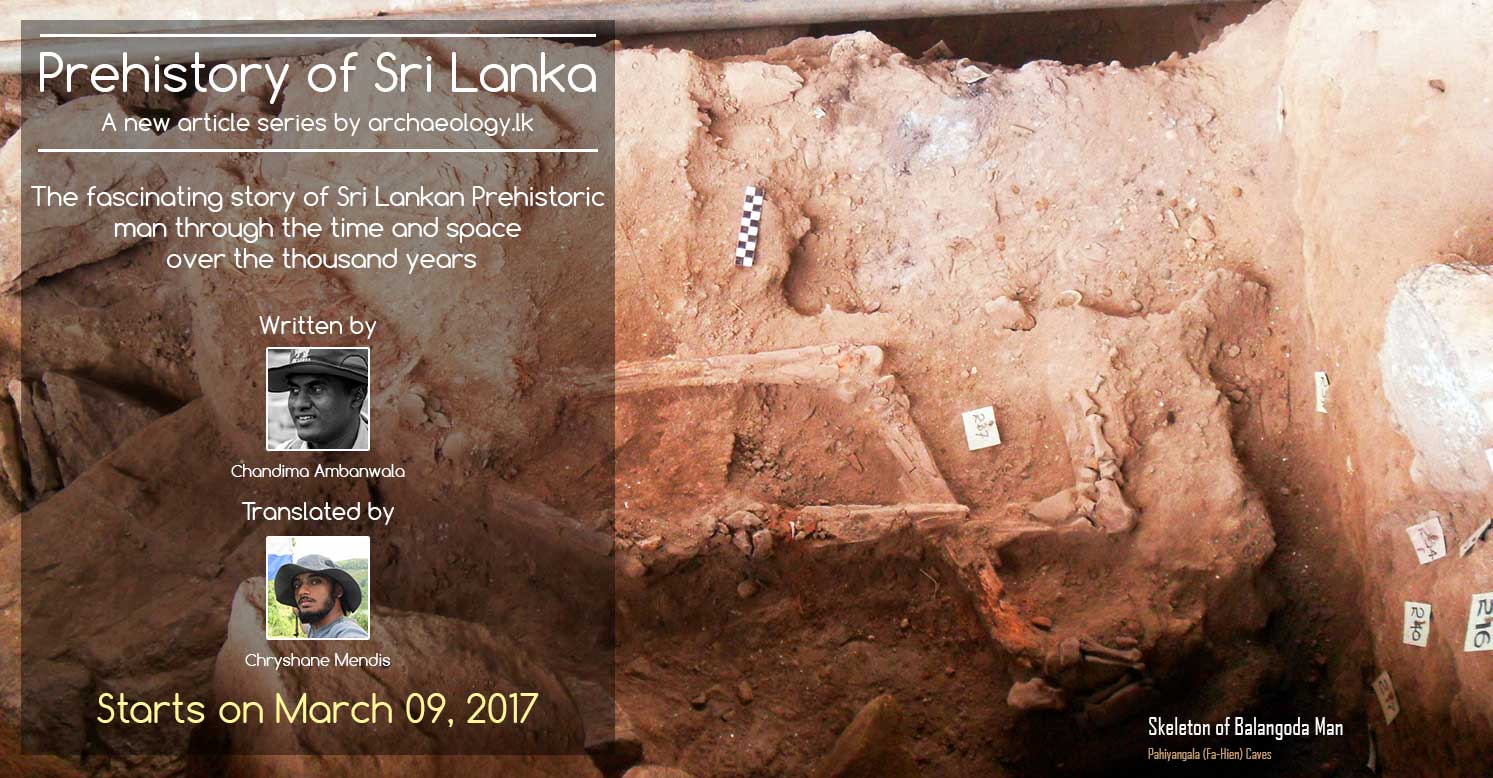 The Prehistory of Sri Lanka is a fascinating episode of the story of Man on how he depended on the natural environment to survive and how he later tamed it to form civilization. The island’s prehistory dates back thousands of years before the events of the Pali chronicles. Sri Lanka stands out in the world as one of the few countries with a continuous written history from the 3rd century BC. The historical period is considered from the point in time where written records are available and the period of time where written records are not available of man is considered as the prehistoric period. Sri Lanka’s early historic period begins in the 5th century BC with the colonization of the island by immigrants from North India speaking an Aryan language and the historic period from the 3rd century BC from where written records are found.

When we speak of our country’s past, we speak of the 2500 years of written history but hardly do we realize that Man had been in the island long before that, even the great chronicle Mahawamsa states of the presence of various tribes in the island during the arrival of Vijaya. Sri Lanka’s prehistory dates to over 125,000 years ago with evidence of human settlements in almost every part of the country. Through the categorization of stone tools, three distinct periods could be observed as Paleolithic, Mesolithic and Neolithic and the famous prehistoric man of Sri Lanka known as the “Balangoda Man” belonging to the Mesolithic period.

This article series would cover the entire scope of the prehistoric man of Sri Lanka beginning with a clear introduction into the historical setting with an overview to the terminologies and the known knowledge to the novice mind. Then with an overview of the origin of the geology and geography of the island in order to better understand the natural environment of the prehistoric man and then on to the extensive studies conducted on prehistoric archaeology from the late 19th century to the present by both foreign and local scholars.

Purpose of the Series

The aim of this article series is to bring to light to the general public an important aspect of our country’s history; because this knowledge is mostly confined to only a few in the academic world. Just as we speak of a proud 2500-year-old history, it is as important to know the origin of our ancestors and how they interacted with the environment to survive.

This article series is written by our archaeology.lk team member Chandima Ambanwala which has been published in 6 volumes in our Sinhala website and is translated into English by Chryshane Mendis of archaeology.lk.

Completing Advance Levels in 2013 from St. Joseph’s College, he is an independent researcher in the fields of Colonial warfare in Sri Lanka and is currently an undergraduate at Aquinas University College Borella.

At 65,610 km2 Sri Lanka is one of the large islands in the Indian Ocean and during the Pleistocene epoch studies have shown that the island was joined to the mainland of the Indian Subcontinent. Due to the cold temperatures of this epoch the scattered glaciers caused the water level to fall and thus much of the places under water today was land during this time. Due to the drop in sea levels Sri Lanka and India was combined for the last time about 7,000 years ago. During the last 500,000 years the island was joined with the Indian mainland several times. According to some scientists during the past 1 million years the two lands were one landmass for most of the time. When the sea level fell approximately 70 meters, Sri Lanka and India was connected by a land bridge of about 100 km in width. Thus this land bridge caused species to inter-migrate between the two lands.
Read more
Prehistory

Fa Hien-lena, one of the largest habitable rock shelters in Sri Lanka, is situated in south-western Sri Lanka, at Yatagampitiya of the small township of Bulathsinhala near Horana in the Kalutara District, approximately 75 km southeast of Colombo (80 12’ 55” E 6 38’ 55” N). Popular belief has it that the famed Chinese Buddhist monk Fa Hien sojourned there while on his pilgrimage to Adam’s Peak.
Read more