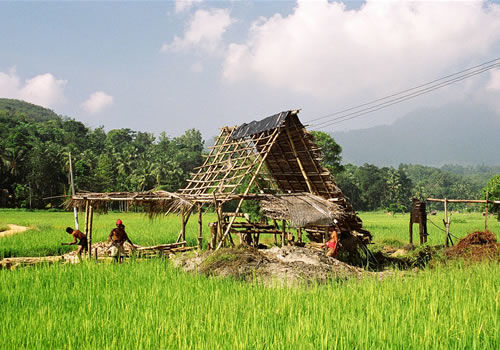 The Pleistocene epoch is a scientific time period in geology which formed millions of years ago. During much of this epoch the world was covered under ice. This Pleistocene epoch had its effects on Sri Lanka as well according to geologists; Dr. Paul Edward Pieris Deraniyagala had conducted the most number of researches into this period in Sri Lanka. The details and results of his investigations into this epoch were included in a thesis which won him his Doctorate from Harvard University in the US. Based on that important thesis his book The Pleistocene of Ceylon was published by the Department of National Museums in 1958 (P.E.P. Deraniyagala (1958), The Pleistocene of Ceylon, Natural History Series, Ceylon National Museum, Ceylon). According to him this epoch would have been from 1.8 million years to 12,000-10,000 years ago.  All due credit for the present knowledge on the Pleistocene epoch amoung the scholarly society in Sri Lanka belong to Dr. P. E. P. Deraniyagala (He is the son of famous historian and Civil Servant Paul. E. Pieris and his son is the notable prehistorian and former Director General of the Archaeology Department Dr. Siran Upendra Deraniyagala). Before and after him, no Sri Lankan could be found with the interest to explore this important aspect of prehistory which is a sad situation. But the effort by Kalum Nalinda Manamendra-archchi out of the modern scholars to the study of fossils from the Rathnapura area must be appreciated. The difficulties in finding evidences, the lack of faith in the evidences revealed, inability to properly date the evidences, and the difficulty in identifying the context in which the finds are found can be stated as some of the factors that discourage scholars in the study of this period.

At 65,610 km2 Sri Lanka is one of the large islands in the Indian Ocean and during the Pleistocene epoch studies have shown that the island was joined to the mainland of the Indian Subcontinent. Due to the cold temperatures of this epoch the scattered glaciers caused the water level to fall and thus much of the places under water today was land during this time. Due to the drop in sea levels Sri Lanka and India was combined for the last time about 7,000 years ago. During the last 500,000 years the island was joined with the Indian mainland several times. According to some scientists during the past 1 million years the two lands were one landmass for most of the time. When the sea level fell approximately 70 meters, Sri Lanka and India was connected by a land bridge of about 100 km in width. Thus this land bridge caused species to inter-migrate between the two lands.

At the end of the Pleistocene in Sri Lanka as a result of the rising temperatures the ice sheets that covered the world began to melt away. With the melting of the ice sheets the different materials found on the surface of the earth were mixed with the water and were deposited in low areas. Thus along with the alluvial deposits formed, environmental material on the surface through

anticline formations have been deposited in these low depths. Thus human and animal remains on the surface had been washed down and embedded in these deposits. The gem and seam deposits and other deposits of Rathnapura and other adjoining areas were created through the above process.

Found below is a comparison of this state of the Pleistocene with that found in the Alps mountain range by Dr. P. E. P. Deraniyagala. These ideas have been expressed by Dr. Deraniyagala with regard to the glacial periods of Gunz, Mindel, Riss and Wurm and also the warmer interglacial periods.

The soil layers of the gem and seam deposits of Rathnapura and the surrounding areas are the results of the melting of the ice from the mountainous areas. The fossilized remains of fauna and flora of that time or even before are preserved within these layers. In the process of excavating these seam deposits for gem stones, fossils of plant and animal life are usually found. Some of the main places that produce fossils in the Rathnapura alluvial deposits are Gatahaththa, Balangoda, Ambilipitiya and Kalawana. The gravel layer with such data is usually between 6 inches to 3 feet in depth and rarely exceeds 3 feet. The alluvial deposits can be found 12-40 feet deep and at certain places like Rakwana it is found 108 feet below the surface but certain places may also contain these deposits on the surface as well. Based on the data collected thus far, the details of the soil layers of a normal Rathnapura alluvial deposit can be stated as below.

It is evident that certain layers containing fossils have been re-deposited due to the process of glacierization. According to the above it is hard to ascertain that these would have been deposited in a regular/methodical way as certain deposits have been found which were thought to be very old but contained pearls, pottery and iron of much later periods. Such deposits show a disturbed nature therefore because of this it is difficult to properly date the deposits chronologically.

In the middle of the 1930s under the supervision of P. E. P. Deraniyagala from the National Museums (in 1939 he was made Director of National Museums), investigations were carried out into the alluvial strata that contained gem stones in the Rathnapura deposits. From then until 1963 the fossils of animal and plant life were subjected to investigation by Dr. Deraniyagala. By examining the fossil records found within these layers, a high knowledge on the species that lived during the Pleistocene was developed and amoung them identifying animal species that have gone extinct and those that are still living.

Below is a list of the large number of spices that have gone extinct.

The enamel of the tooth has turned black and is semi-cylindrical at the bottom which enlarges when going up. The deposit stratification of the site that contained this fossil is given below:

The fossil of the hominid Homopithecus sinhaleyus was found along with the fossils of Hexaprotodon sinhaleyus, Rhinoceros kagavena, Elephas maximus sinhaleyus, Axis axis ceylonensis, and Rusa unicolor unicolor and through the Uranium dating method were dated to the same period.

Below is a result of the comparison of the incisor tooth of Homopithecus sinhaleyus with the same of a modern Gorilla and Human.

Through this comparison it is proven that this belonged to an ancestor of modern humans and also it shows close resemblance to those of Pithecanthropus robustus of Java and Gigantopithecus blacki of China. Further Prof. A. Raymond of the University of Kyle? Through his great knowledge on the subject has stated this to be a fossil of an ancestor of humans.

The fossil of Homo sinhaleyus was found in a location close to Ratnapura and make up the bone fragment of the skull above the left eye. Along with this, the fossils of Hexaprotodon and Elephas maximus sinhaleyus and the deposit stratification of the site that contained these fossils are given below:

When taking the measurements of this bone fragment, the eye cavity was found to be relatively small, thus based on these measurements Dr. Deraniyagala has stated that this could be compared to the Neanderthal humans.

The relative age of the fossils of the Ratnapura deposits can be determined through comparison. Therefore the assumptions can be arranged as below:

There are also plant fossils found from these deposits and according to the radiocarbon dating done by the TATA Corporation of India, the below results were arrived at:

These plants can even be found at present in this region.

The fossils found from the gem mines of Ratnapura share a comparison with those found in the regions of Swahilik and Narmada basins of India as shown by Dr. Deraniyagala. These regions of India belong to the Middle Pleistocene epoch.

Through this we could get a sound knowledge on this historical time period which is the Pleistocene. But as shown above due to the re-depositing, it is an obstruction to dating these finds accurately. But with modern technological developments it is important to re-examine these fossils; this could be done through the collaboration of future archaeologists, archaezoologists and geologists which could yield more important evidences.