The felicitation ceremony for Dr. Roland Silva and Prof. P.L. Prematilleke organized by ICOMOS – Sri Lanka was held recently on the 24th of March 2018 at 10.00 am in the Auditorium of the Sri Lanka Institute of Architects, Colombo 07. This was held to honour the services of Dr. Roland Silva and Prof. P.L. Prematilleke, two past presidents of ICOMOS – Sri Lanka, for their unique and valuable contribution to the protection and conservation of Sri Lanka’s heritage. During the ceremony, the first ever Gold Medal offered by ICOMOS – Sri Lanka was conferred onto Dr. Roland Silva with Prof. Prematileke being conferred with the Honorary Membership of ICOMOS – International, the first Sri Lankan to receive it. The ceremony was followed by a lecture on “Challenges of Redevelopment in the City of Anuradhapura” by the Guest of Honor Prof. Madduma Bandara. 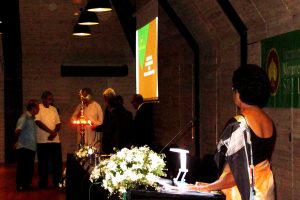 The ceremony, participated by distinguished dignitaries, began with the lighting of the traditional oil lamp; which was followed by the welcome speech delivered by the Mr. Jayatissa Herath, President of ICOMOS Sri Lanka. Following the welcome speech, the dignitaries in the persons of Prof. Gamini Adikari, Prof. D.B. Nandadeva, Dr. Nilan Cooray, Arch. Jayatissa Herath, Dr. Roland Silva, Prof. Prematilleke and Prof. Madduma Bandara were invited to take their seats at the head table. The day’s proceedings began by inviting Prof. D.B. Nandadeva to read the citation of Prof. P.L. Prematileke. The following is a summary of the read citation.

Greeting the audience, and assisted by a slide show of photographs, Prof. Nandadeva began by saying it is a great privilege given to him by the President and Council of ICOMOS, to formally introduce ‘an inspiring teacher, an enthusiastic archaeologist, a pioneering heritage preservation specialist, an innovative Museologist and a great role model of our times’ in the person of Professor Leelananda Prematilleke.

Having obtained a Bachelor’s Degree in Oriental languages from the University of Ceylon, Colombo, a Master’s Degree in Ancient History and Culture from the University of Calcutta and Doctoral training at the Institute of Archaeology at University College London; he began his academic career as an Assistant Lecturer in the Sub-department of Archaeology of the University of Peradeniya in 1960, with Professor Senerat Paranavitana as his mentor. He was instrumental in establishing the first ever undergraduate degree programme in Archaeology in the country in the early 60s and he is also credited for the upgrading of the sub-department of Archaeology to a full-fledged academic department in 1976. He was then subsequently promoted to the Chair of the same department and held that title until his retirement in 1989. Following his retirement and in recognition for his outstanding services to the field, he was awarded the honorary title of Professor Emeritus and few years later the Honorary Degree of D.Litt by the University of Peradeniya. He served as an Advisor and Consultant to the Department of Archaeology and was instrumental in forming the Postgraduate Institute of Archaeology and the Sri Lanka Council of Archaeologists. Contributing to the academic sphere with over 200 works of literature, he was active both locally and internationally as well, being a Visiting Professor at the Institute of Archaeology, University College London and Waseda University in Japan. His most noteworthy contribution to heritage conservation was in the rescue archaeology project of relocating the Nalanda Gedige, a 8th-10th century monument which was about to be submerged by the Bowatenna Reservoir in Matale; this was somewhat reminiscent of the rescues archaeology project of the Abu Simbel temple in Egypt. His contribution to the UNESCO – Sri Lanka Project of the Cultural Triangle was immeasurable, in association with Dr. Roland Silva and other scholars he played a major role in its implementation from 1980-1997. Through the programme he directed archaeological excavations at Polonnaruwa, which uncovered an ancient hospital site in the Alahana Pirivena and at Kandy. UNESCO also obtained his services as a Scientific Leader for the Third Leg of the Silk Roat-sea Route project and as an Assessor of authentication of the Lumbini site. Prof. Prematilleke was also involved in the field of Museology having being lead Consultant in the display arrangements at the International Buddhist Museum at Kandy and others such as the Colombo National Museum. He was also a founding member of ICOMOS – Sri Lanka and its President from 1997-2000. Prof. Prematilleke, even at the age of 96, is still involved in the activities of ICOMOS.

On an ending note, Prof. Nandadeva also mentioned that he was much privileged to have been a student of Prof. Prematilleke as part of the Fine Arts study programme at Peradeniya University in the early 1970s; and was also an inspiration for him in specializing in the Heritage Management and Conservation field. Prof. Nandadeva said that it was decided at the 19th General Assembly of ICOMOS held in Delhi, India in December 2017 to confer honorary membership of ICOMOS upon Prof. Prematilleke for “his contribution to the life of the organization of the ICOMOS and his distinguished service in the field of conservation, restoration and enhancement of historical monuments, sites and group of buildings”. (see link to full speech)

For the second leg of the ceremony, Dr. Nilan Cooray was invited to read the citation for Dr. Roland Silva. The following is a summary of the read citation. Greeting the audience, Dr. Cooray said it was a privilege given by the President and Council of ICOMOS, to formally introduce a unique personality of our times, Dr. Roland Silva.

Born in Giriulla in 1933 and educated at St. Joseph’s College, Colombo, Young Roland Silva, going against his parent’s choice of studying Accounting, began his architecture studies at AA School of Architecture in London from 1954 to 1959. There he became interested in the meaning of heritage buildings and thus while studying architecture, he found time to complete the Postgraduate Diploma in Indian Archaeology at the Institute of Archaeology at the University of London in 1958; and even at this young age he demonstrated his skills in multi-tasking, which later became the hallmark of his career. Returning to Ceylon he became an Associate Member of Ceylon Institute of Architects in 1960, Royal Institute of British Architects in 1962 but finally chose the heritage sector by joining the Department of Archaeology as Assistant Commissioner (Architecture) in 1960. He later went on to obtain a Postgraduate Diploma in Conservation of Monuments from University of Rome in 1968 and his PhD from the University of Leiden in the Netherlands in 1988. During his illustrious career of 30 years at the Department of Archaeology, he had the privilege of being the last Commissioner of Archaeology and its first Director General; and during tenure he gave professional and scientific leadership for complex conservation works such as the restoration of the Maligawila Buddha Image and many historical Stupas. Through his great vision and holistic approach to heritage, he was the pioneer and pathfinder for the UNESCO – Sri Lanka Project of the Cultural Triangle in 1980 and also for the inscribing of Sri Lanka’s first six UNESCO World Heritage Sites. In par with these international projects he also set up the Central Cultural Fund for the financing and implementation of the project. A founding member of ICOMOS – Sri Lanka, he was its Founding President from 1981 to 1990, and also championed for regional representation in ICOMOS International and was subsequently elected the first Non-European President of ICOMOS in 1990, which he held for an unprecedented three consecutive terms till 1999; during which he worked tirelessly to set up national committees of ICOMOS in African, Asian and Latin American countries to realize his vision of making ICOMOS truly a world body. His international work included chairing scientific sessions of UNESCO that listed 222 sites throughout the world and also advocated looking into Asian traditions in conservation and management with an approach to living heritage. He also chaired the international proceedings in Nara, Japan in 1993 that led to the Nara Document of Authenticity, a landmark document in heritage conservation. One of his major contributions at international level was leading a team of experts in the conservation of the Leaning Tower of Pisa in Italy.  Roland Silva the architect, too was active, having assisted in developing the architecture education by setting up a course in architecture at the Colombo Campus and was thus an influential teacher to several generations of architects. The former Head Office building of the CCF, Polonnaruwa Site Museum, and the old site Museum at Sigiriya were all designed by him, evolving a specific architectural vocabulary with tradition. (see link to full speech)

The first ever ICOMOS – Sri Lanka Gold Medal was subsequently presented to Dr. Roland Silva and after which, he was invited to speak a few words. Dr. Roland Silva appreciated the presence of all friends who attended the event and commented on a small experience of his involvement in the conservation of the Leaning Tower of Pisa. He said how committees were established over the history of the tower for its conservation and that he chaired the last committee in 1999. He said that they had to take the final decision as it had leaned 5 meters. The committee consisted of 134 members he said, and described how they chose a simple solution; to extract earth from underneath the raised end and managed to save it. He concluded by saying how he was asked to deliver the toast while having dinner under the shadow of the Tower and how he delivered it with a joke – “Leaning Tower of Pisa said to the Big Ben of London, Mr. Big Ben, if you have the time, I certainly have the inclination!”

Next, the key note speaker Prof. Madduma Bandara was introduced and began his lecture afterwards (see link to lecture). Coming to the event’s conclusion, Arch. Jayatissa Herath presented a memento to Prof. Bandara for his interesting lecture, and the vote of thanks was delivered by Arch. Viranjani Kulakulasuriya, which was followed by a fellowship afterwards. 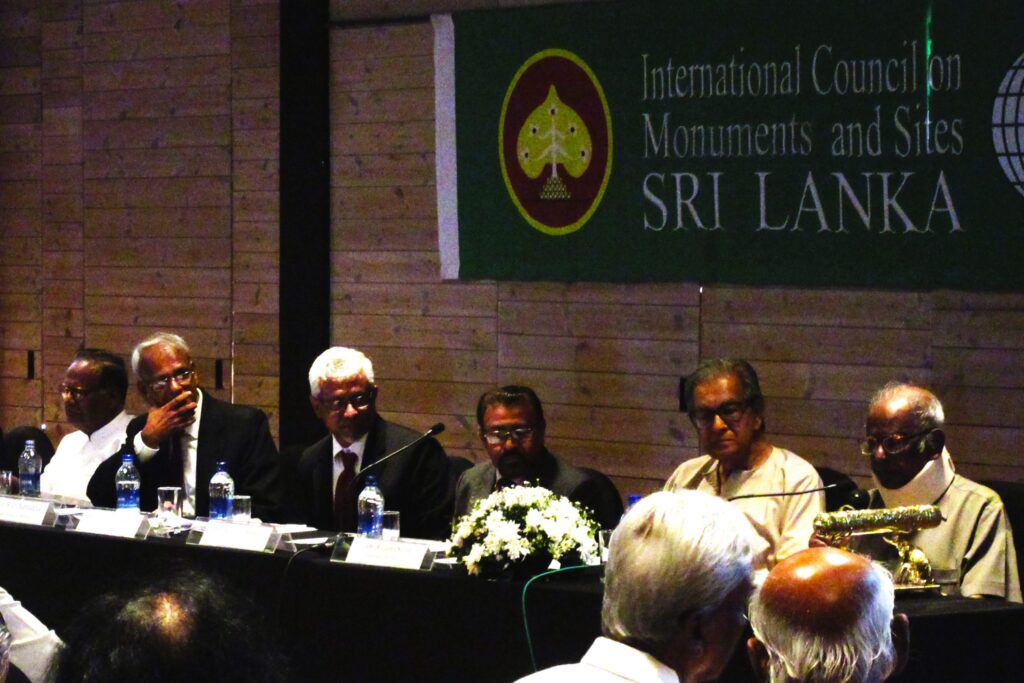