The Pettah, located in the heart of Colombo bordering the Colombo harbor and the commercial hub Fort was once part of the colonial Dutch city of Colombo which was the center of administration of the Dutch. The Pettah during the Dutch period was known as the Oude Stad or Old City and formed the residential quarters of the city which bordered the Castle or the Dutch Fort of Colombo on the west. This once highly residential area during the Dutch occupation gradually transformed into a commercial hub during the British period and remains that way at present with its unique charm not felt elsewhere. The outline of the Pettah or the roads, are those laid out by the Dutch in the mid-17th century and has managed to maintain its form for over 300 years. Well into the British period the Pettah consisted of houses of various persons and is still scattered around with buildings of old, some preserved and some modified beyond recognition. Out of the surviving Dutch buildings, only the building of the present Dutch museum down Prince Street built in the late 17th century remains in the Pettah, the various other historic buildings such as the Town Hall and the Olcott building belong to the British period. Interestingly there is said of a building situated down Prince Street to be the ‘Old Dutch Stables’. Hunting down this mysterious building, it was found to be on Prince Street, few blocks before the Dutch museum.

This building which now houses a printing press and several other shops, can be found on the right of Prince Street before the Dutch museum when entering from 1st Cross Street but is unrecognizable from the outside as it is camouflaged to meet that of the rest of the Pettah. Through this outer entrance one would gaze in amazement at the massive door frame and its yellow walls instantly recognizing it to an old colonial building. 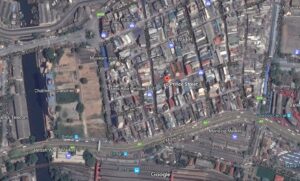 The doorway which is about 6 feet from the outer entrance is made of think timber with a large lattice fanlight. Entering through here one comes to a long narrow corridor with tables and racks on either side used by the printing press. Immediately after entry there are two similar doorways on either side of the wall with large door frames but which are sealed off. About 10 feet in front one would find a massive masonry arch with elaborately decorated columns and a keystone in the center of the arch with a symbol of a horseshoe, this section contains a high ceiling. Passing this arch is an uneven corridor with an old two storied building running along the left side and a modern two storied building on the right. 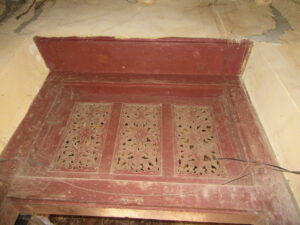 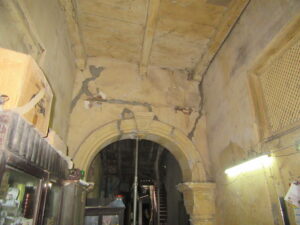 The section on the left is about 20 feet in length and houses the printing press and a few other shops in the rooms. The upper floor looks abandoned and could be reached from the right wing. This upper floor contains an old wooden balcony  with railings which are almost falling apart. The doors and windows of this old section are typical of old 20th century buildings with  decorated oval arched fanlights. 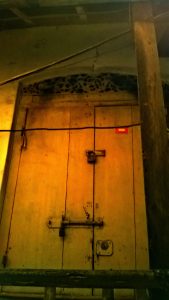 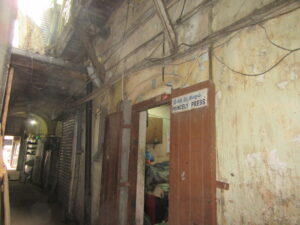 This building is in a very bad state of preservation and only the strength of its original structure has made it to withstand the winds of time. The two sealed off doorways no doubt opened up to two side wings of this building which are sadly no more as two new buildings have come up on either side in recent times. The people there state that the new up stair building on the right of the inside corridor was built in the 1970s and that before there was an old single storied section with the tiled roof tilting inwards and this section was separated from the inner corridor which would have been an inner courtyard by a long lattice work.

This building is thought to be a Dutch stables as claimed by the people around. Having studied the history of the Colombo Fort well, I was surprised to find such a claim. Deciding to find out the truth about this building I dug through the various sources of history and also went through old maps at the National Archives but found no indication of a Stable at the Pettah. When the Dutch took over Colombo from the Portuguese in 1656, they demolished the entire Portuguese city and built anew their own city. They concentrated their military fortifications to the west of the city forming the present Fort area and to the east; they built the residential quarters known as the Oude Stad or Old City forming the present Pettah. Within the Fort they housed the garrison and all high government officials including the Governor and other buildings of the Dutch East India Company which also included the Company stables. The Oude Stad was the residence of the Burghers and the other communities that served in the Company. Going through a map of 1733, there are mentioned 15 important buildings in the Oude Stad including the Siminarium (Seminary which is now the Dutch Museum) and the Nederlandse School on Prince Street known as De Prince Straat during the Dutch times, but no mention is made of a stables.

A Stable or not?

L. Brohier gives an interesting account of the Pettah during the Dutch times in his Changing Face of Colombo speaking on the life of the people during those times and interestingly mentions that residents who own horse carriages, the horses where brought in from the front door and stabled in the garden behind. Therefore this building could not have been a purpose built stables but an ordinary house. Alternately no source could be found as to when this building was constructed and who the original owner was. Digging through the National Archives no material was found on this. I was advised to check with the Colombo Municipal Council as they too have a wealth of documents on Colombo; meeting with the Municipal Assessor regarding this, she said that no such records were found and that the building has not been assessed. Speaking to researcher Mr. Dhanesh Wisumperuma, he stated that the Horseshoe is generally used as a symbol of Luck and was used in houses until recent times; the horseshoe found on the arch of this building could have been placed for this purpose. This might have led to people misinterpreting it as a Stable. Therefore it could be stated that this building was in no way a Stables but an ordinary house.

Now the question was its period of construction, was it really a Dutch era building or not? As no written evidence could be found on the date of construction of this building, only an analysis of the architectural features could reveal its most likely period. What mainly characterizes this building to the Dutch period is the large door frame. A study of the colonial architecture revealed that although by the first decades of the 1800s British style buildings were being built, the old Dutch traditions in-house design survived well into the 20th century; leaving to the opinion that what may look Dutch, could well be British. Further speaking to renowned architect Mr. Ismeth Raheem, he explained that the Pettah was remodeled several times and that very little remains of the work of the Dutch period. Looking at the architectural features of this building, he stated that the Keystone on the arch looks British and placed a date between 1880–1930; well into the British period.

A further comparison was made with the Olcott building, another late 19th century house down Maliban Street where Sir Henry Steel Olcott resided.  The column supporting the arch in the Olcott building drew much resemblance to the same found at the said Old building.  And further going through old building plans in the book The Architecture of an Island, I found the surviving sections of this Old House in resemblance to a plan of a Moslem trader house of the mid 19th century down Chekku Street, Pettah but an excursion down this said Street revealed no such house at present for a physical comparison. This building which has not come under the preview of the Department of Archaeology, although not Dutch and not a Stable is no doubt a unique component of Pettah’s once proud heritage and if preserved would be an appeasing sight for the wondering tourist to glimpse on a once bygone era of the Pettah.