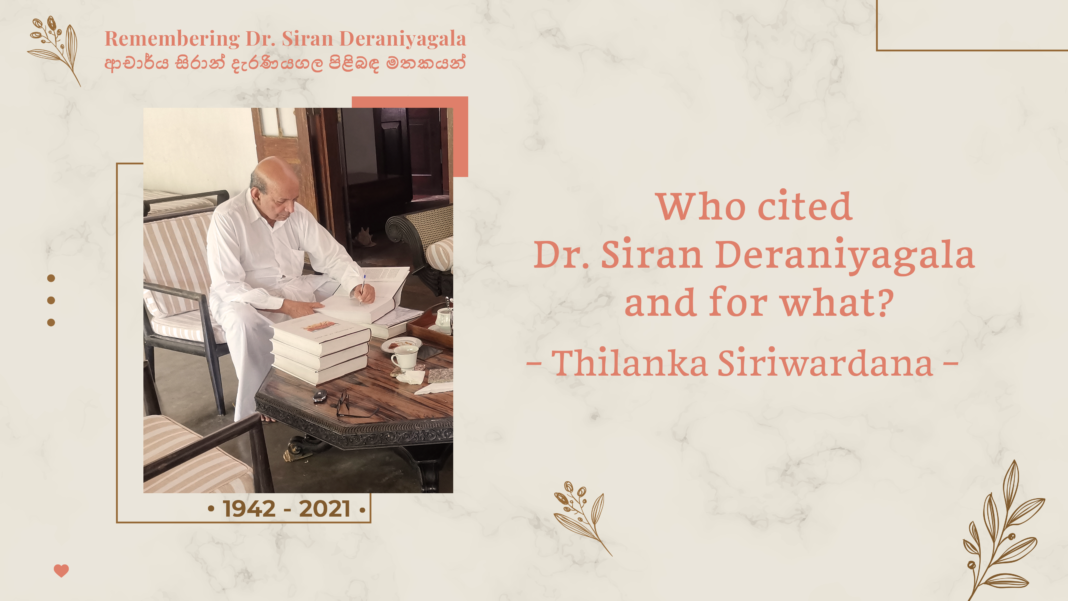 Thilanka Siriwardana
PE Peiris, PEP Deraniyagala and SU Deraniyagala was the legendary trilogy of Sri Lankan academia. The secrets of Sri Lankan past are not revealed easily. Their scientific striving to uncover the past of this island unfolded like an epic saga. They are still pointing us their fingers to examine the vast hinterland that remains to be discovered.

Dr. Siran Deraniyagala must be the most influential archaeologist in Sri Lanka after Prof. Senarth Paranavitana. Introducing a new historical paradigm to the Sri Lankan past, undoubtedly, it was only he who presented a systematic – theoretical framework to the Sri Lankan past and tested a hypothesis through several decades until it developed into general acceptance. The results of the quest have been momentous. If someone seriously examines his landmark publication of 1992, they will be able to find a road map to the future studies and pointers to raise new questions.  What was his influence on local, regional and international academia? A briefing of some facts we gathered to think of this will be presented below. With the hope of the usability of these facts, we would like to invite the readers to rethink the sufficiency of our reading of Deraniyagala. Did we lose him twice?

2. The prehistoric culture and the physical anthropology

Abeyaratne, Nilu, 1999, The role of caste hierarchy in the spatial organisation of a village landscape in the Dry Zone of Sri Lanka, The archaeology and anthropology of landscape: Shaping your landscape, Edited by Peter J.Ucko and Robert Layton, Routledge

Habgood, Phillip and Franklin, Natalie, 2008, The revolution that didn’t arrive: A review of Pleistocene Sahul, Journal of Human Evolution

Jones, Sacha and Pal J.N, 2009, The Palaeolithic of the Middle Son valley, north-central India: Changes in hominin lithic technology and behaviour during the Upper Pleistocene, Journal of Anthropological Archaeology 28, pp. 323–341

Mellars, Paul, Gori, Kevin, Carr, Martin, Soares, Pedro and Richards, Martin, 2013, Genetic and archaeological perspectives on the initial modern human colonisation of Southern Asia, Proceedings of the National Academy of Sciences of the United States of America, Vol. 110, No. 26, pp. 10699-10704

Roberts, Patrick, Boivin, Nicole and Petraglia, Michael, 2015, The Sri Lankan’ Microlithic’ Tradition c. 38,000 to 3,000 Years Ago: Tropical Technologies and Adaptations of Homo sapiens at the Southern Edge of Asia, Journal of World Prehistory

Kennedy, Kenneth, 2003, The Uninvited Skeleton at the Archaeological Table: The Crisis of Paleoanthropology in South Asia in the Twenty-first Century, Asian Perspectives, Vol. 42, No. 2

Kulatilake, Samanthi, Nimal Perera, SU Deraniyagala and Jude Perera, The Discovery and Excavation of a Human Burial from the Mini-athiliya Shell Midden in Southern Sri Lanka