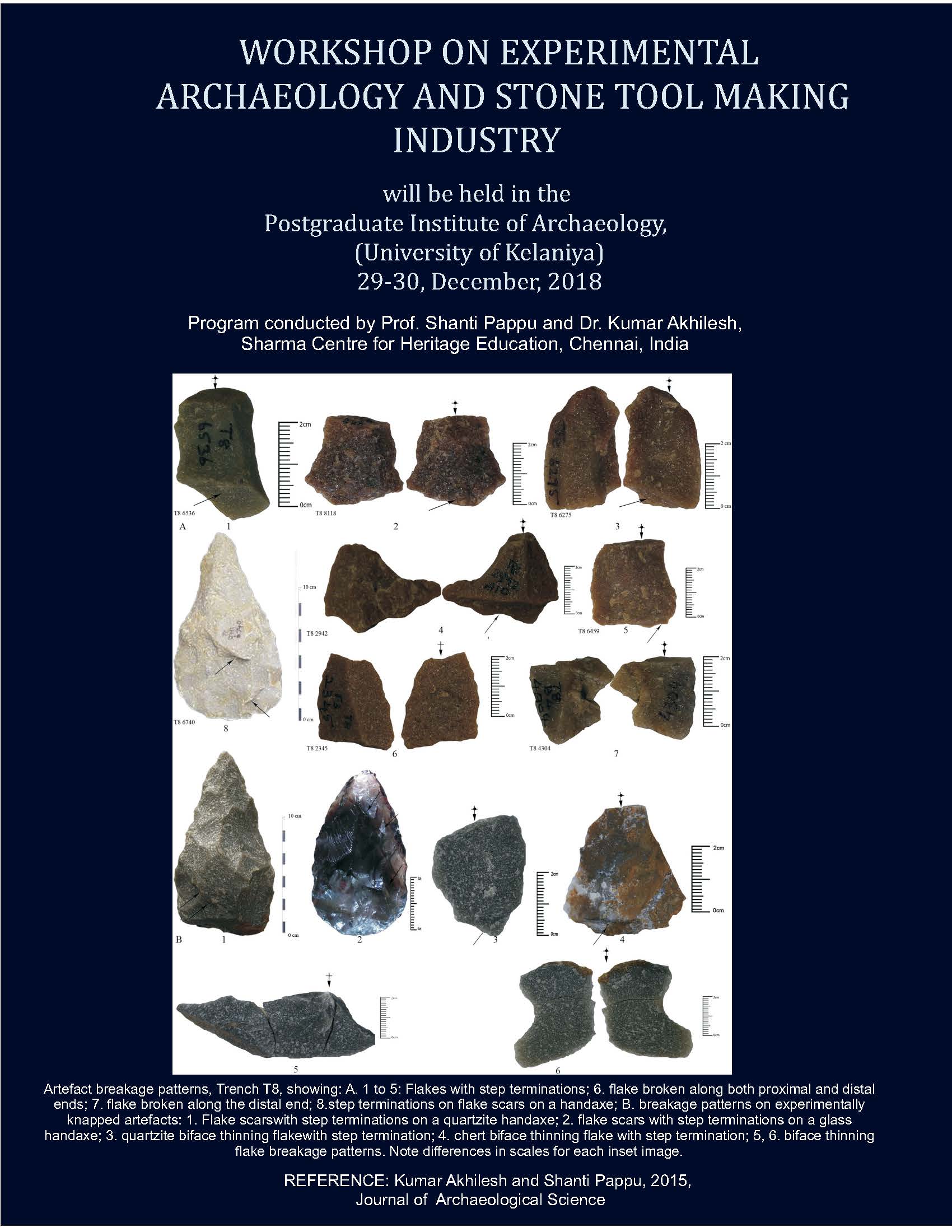 The PGIAR is planning to organize a workshop on experimental archaeology: fundamentals of the manufacture and use of prehistoric stone artifacts on 29th -30th of December, 2018 from 9.00 am at the PGIAR labs/auditorium. The objective of this workshop is to understand stone tool making industry and their functions. Students will be provided with raw material, hammerstones, etc. and will be given basic training to understand knapping techniques (techniques to make stone tools). They will then have a structured workshop on the use of flakes on different plant material and procedures on documentation of experimental studies that are being conducted. This workshop will be conducted by the senior scholars from India and Sri Lanka: Prof. Santhi Pappu, Founder/Secretary Sharma centre for Heritage Education, India, Dr. Kumar Akhilesh, Director, Sharma Centre for Heritage Education, India, Dr. Nimal Perera, Former Deputy Director, Excavation/Department of Archaeology, Dr. S. U. Deraniyagala, Former Director General, Department of Archaeology.

Please use the following map for directions. 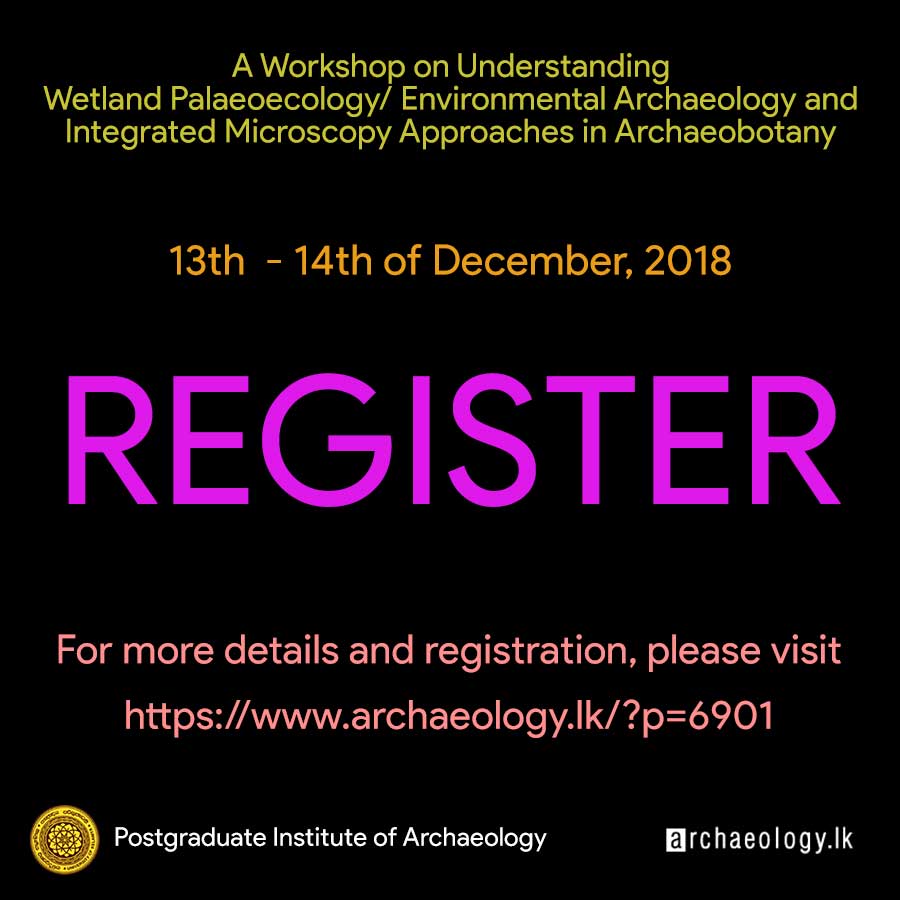 The PGIAR is planning to organize a workshop on understanding wetland palaeoecology/ environmental archaeology and integrated microscopy approaches in archaeobotany on 13th  – 14th of December, 2018. This workshop will include lectures, discussions, and demonstrations on microscopic observations on the materials collected from the Horton Plains, Muthurajawella wetlands/Negombo Lagoon and Wilpattu. The workshop will be conducted by a team comprising of Dr. R. Premathilake from the PGIAR and Prof. C. O. Hunt, Professor of Cultural Palaeoecology, School of Natural Science and Psychology, Liverpool John Moores University, United Kingdom, Editor, the Journal of Archaeological Science-Report and Editorial Board Member, Journal of Archaeological Science. The objective of this workshop will be to understand the importance of wetland palaeoecology and sampling strategies used in environmental archaeology, e.g., understanding palaeo-climate, palaeo-vegetation, and human activities in the past. The lectures will be conducted in English and at the end of each lecture a summary will be given in Sinhala. 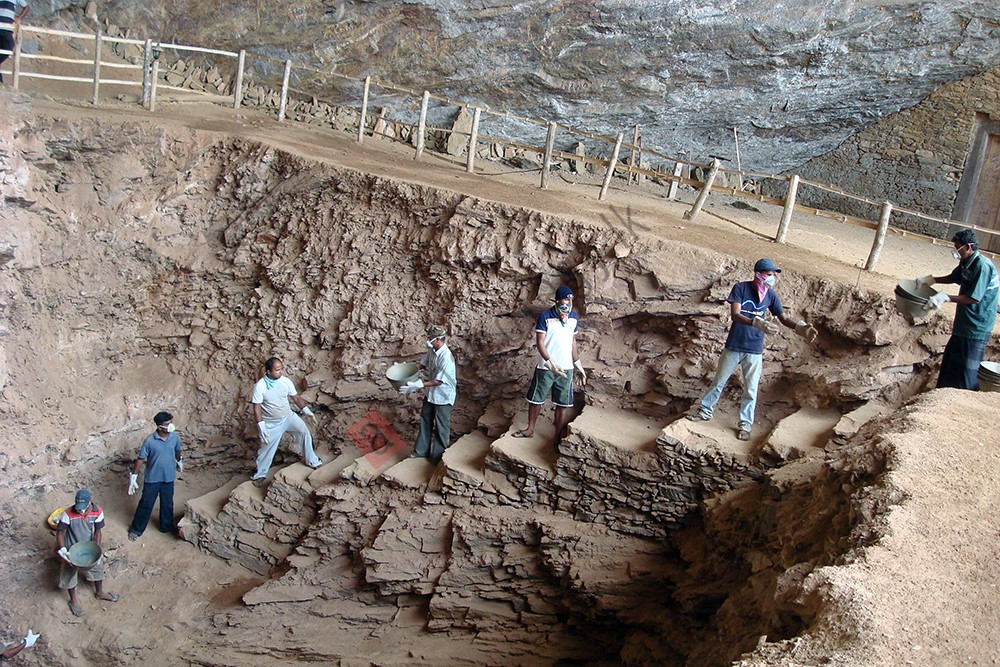 Fa Hien-lena, one of the largest habitable rock shelters in Sri Lanka, is situated in south-western Sri Lanka, at Yatagampitiya of the small township of Bulathsinhala near Horana in the Kalutara District, approximately 75 km southeast of Colombo (80 12’ 55” E 6 38’ 55” N). Popular belief has it that the famed Chinese Buddhist monk Fa Hien sojourned there while on his pilgrimage to Adam’s Peak.

The site lies in the foothills abutting the coastal plain and is a complex of interconnected rock shelters developed in a coarse crystalline gneiss cliff. The entrance faces east and is easily accessed along a short, fairly steep, path. From the entrance, one is afforded a view of Sri Lanka’s central hills through the gem-bearing strike valleys of Ratnapura. The mouth has a width of c. 30 m and an average height above the cave floor of 20 m. The interior extends for c. 10 m into the cliff. Secondary lowland forest adjoins the cave complex, the primary rainforest having been cleared for plantations at the turn of the twentieth century.

Archaeologically, the site was initially recorded in 1968 by the then Assistant Commissioner of Archaeology of the Department of Archaeology of the Government of Sri Lanka, Dr S.U. Deraniyagala, when it was being used as a Buddhist cave temple. Subsequently, it was reserved for future archaeological investigations once adequate resources become available. This did not materialise until 1986 when W.H. Wijeyapala, then Assistant Commissioner in charge of excavations, commenced excavations as part of stage 5 of Deraniyagala’s prehistoric research design titled ‘The systemic interaction of man and environment in prehistoric Sri Lanka’, in which a series of rock shelters excavations were conducted. Shelter A, the larger of the two at the site, was first excavated to a depth of over 6 m. It yielded a consistent mass of what appears to be roof-fall flakes or decaying bed-rock throughout the profile, without any indubitable trace of early human habitation.

Shelter B, a smaller subsidiary shelter located approximately 20 m east of the main chamber (Shelter A), proved to be far more productive. Excavations conducted in 1986, and subsequently in 2009-2012, have yielded a secure sequence of human habitation deposits dating from c. 48,046 to 4422 years ago, including reports of South Asia’s oldest habitation deposit associated with anatomically modern humans (tables 1 to 4).

Optically Stimulated Luminescence dating and sediment analysis were undertaken in collaboration with Ian Simpson and Nikos Kourampas of the University of Stirling, Scotland to provide additional chronological insight. The dating results from these excavations can be seen in Tables 1.

Table 2: Radiocarbon determinations from the 1986 excavation
The samples are bulk radiocarbon measurement made of charcoal. All samples have been calibrated using the OxCal 4.1 software and IntCal 13 calibration curve.

Table 4: Radiocarbon determinations from the 2011/2012 excavations
The radiocarbon dates are all AMS determinations. All the samples have been calibrated using the OxCal 4.1 software and the InCal 13 calibration curve

Layer 1, at the top, comprises brown silty sand with mid to late Holocene occupation debris mixed with recent artefacts, due to levelling of the floor. Beneath it, Layer 2 consists of light brown-grey silty sand with a high density of the cultural material, and the fractional remains of two interred individuals coated with red ochre. Four radiocarbon determinations from the layer 2 would date it to the Mid- Holocene, based on calibrated determinations of approximately 5.5 ka. The next layer down, Layer 3, is a light brown, loose sandy silt which is rich in cultural material. Four early Holocene radiocarbon dates have been secured on charcoal (tables 1 and 3): c. 7700 cal BP, 7800 cal BP, 8100 cal BP and 7800 cal BP.

Phase IV cannot currently be directly related to any of the layers recognised during the 1986 excavation. It corresponds to contexts 139, 237, 142, 144, 174, 237, 109 and 119 as recognised during the 2010 excavation. This phase can be characterised as a period of intensive terminal Pleistocene habitation at the site dated to around 12,000 years cal BP based on a consistent series of eight radiocarbon dates. It is noteworthy for a complete but highly fragile and fragmentary human skeleton, in a set position in an intentionally dug pit, which has been directly dated to around 12,000 cal BP. Since the skeleton was fragile and fragmentary, Dr Jay Stock of the Bioanthropology Department of the University of Cambridge visited the site, catalogued the remain and took them to the University of Cambridge where they are currently being consolidated, reconstructed and studied.

Beneath the terminal Pleistocene habitation deposits, Phase V (layers 4 and 5 of the 1986 excavation) consists of a series of layers and contexts spanning a lengthy period from c. 47,000 to 28,000 cal BP. This period of Late Pleistocene occupation is dated by a consistent series of radiocarbon determinations from the 1986, 2010 and 2012 excavations. The deposits contain stone artefacts along with preservation of faunal remains and a partial human interment. Specifically, Layer 5 (as identified in 1986) produced an association of fragmentary human remains assigned to anatomically modern humans (Homo sapiens) by the eminent American bio-anthropologist Prof. Kenneth Kennedy and his team at Cornell University. Dated to c. 38,000 years ago, these are the earliest anatomically modern human remains known from the whole of South Asia. The lowermost deposits – namely contexts 159, 126, 110, and 108 (as identified during the 2010 and 2012 excavations) – are suspected to correspond to the earliest known occupation by modern humans in Sri Lanka (and possibly the whole of South Asia).

In summary, as can be seen from the available dates (tables 1 to 3), Fa Hien-Lena documents a lengthy period of habitation during the Late Pleistocene prior to the LGM, and between the terminal Pleistocene and the middle Holocene. However, it lacks any dated evidence of occupation during the LGM (c. 28,000 to 13,000 cal BP), suggesting this was a hiatus in the occupation sequence.

The excavations have revealed considerable evidence of the technology employed by the prehistoric occupants of Fa Hien shelter. The great majority of the artefacts are made of quartz, with a much smaller proportion made of organic materials such as bone, antler and shell. Compared to other rock shelters in Sri Lanka, the stone artefact component is relatively meagre, the reason for which is still under investigation. The lithics are dominated by waste products from the manufacture of finished tools, often comprising small quart flakes of less than 2 cm in length. Noteworthy amongst the lithic finds are grindstones smeared with red ochre and hammer-stones. As with the stone artefacts, bone and antler tools are present from the lowermost layers upwards. These comprise predominantly single- and double-ended bone and antler points, commonly with abraded or polished ends. They are small, and remarkable for their high degree of workmanship, notably a fine serration along the edge of one of the points. 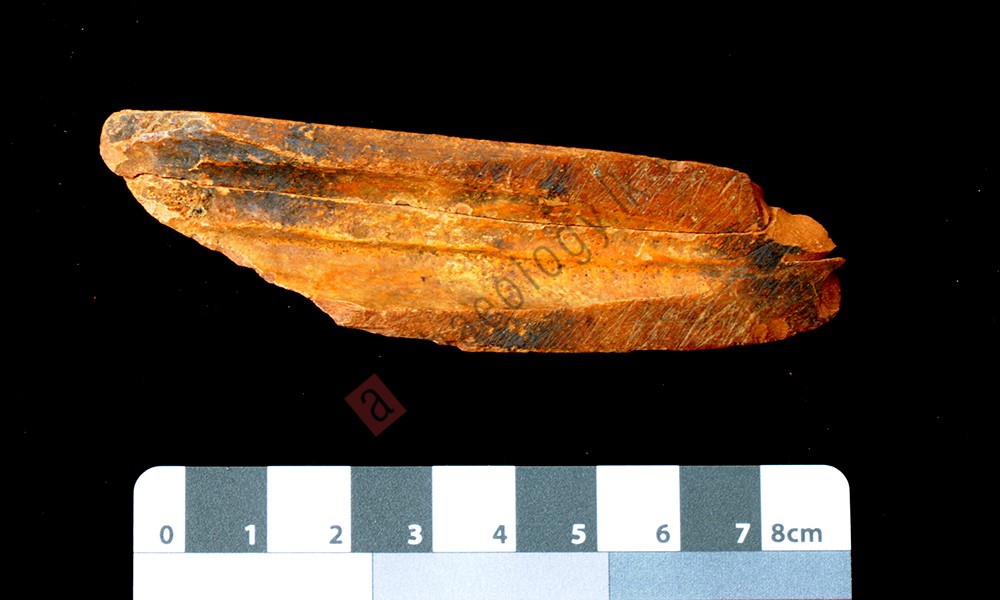 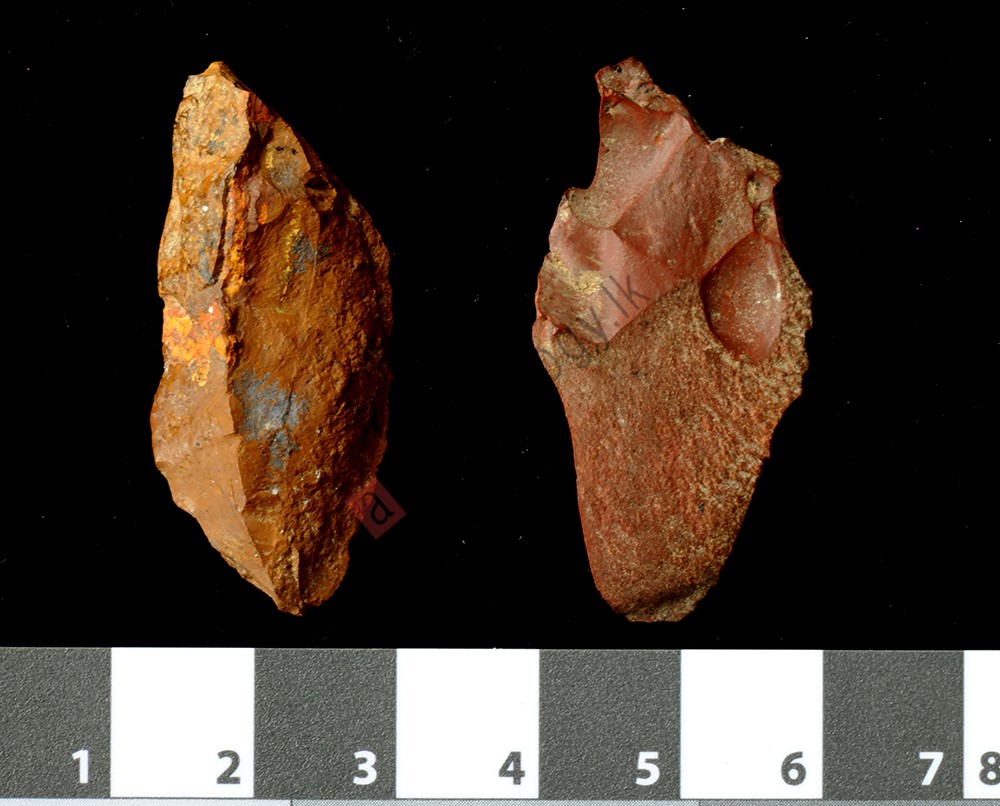 A large assemblage of faunal remains was recovered from the excavations, including molluscs, from the initial up to the final habitation phase. The faunal remains are well preserved and shed important light on the environment and subsistence patterns of hunters and gatherers in equatorial South Asia between c. 47,000 and 4500 years ago. Fa Hien-Lena’s prehistoric inhabitants foraged a broad spectrum of plant and animal resources derived from their rainforest environment. In order to understand more detail of this subject, Stable Isotope Analysis is currently being undertaken by Patrick Robert of the Oxford University, and the preliminary results indicate isotope values that are consistent with the rainforest environment of Sri Lanka’s Wet Zone. Further clarification of the specific Carbon, Oxygen and Nitrogen isotope values will hopefully provide more detail and context in the future.

It is noteworthy that remains of the miniscule lagoon habitat mollusc Potamides cingulatus have been found in the habitation deposits from as early as c. 20,000 years ago. This species occurs by the millions on lagoon flats in the inter-tidal zone. The only likely mechanism by which they could have reached Fa Hien-Lena is as inclusions in rock-salt which would have been transported from the lagoons situated in the southeast of the island over 100 km away.

Prehistorians believe that ornaments and exotic items mark a form of symbolism associated with anatomically modern humans. Beads of marine shell and shark vertebrae, shark teeth and a shell pendant from the earliest cultural layers were found in the Fa Hien-Lena excavations. These findings indicate personal adornment in Sri Lanka from c. 38,000 years ago onwards. They are among the earliest dated markers of symbolic practices (apart from Africa) anywhere in the world.

A new book on Prehistoric Sri Lanka by Dr. Nimal Perera(Deputy Director General, Department of Archaeology, Sri Lanka) has been published by the British Archaeology Reports. This is the major publication on Sri Lanka Prehistory after the