A new book on Prehistoric Sri Lanka by Dr. Nimal Perera(Deputy Director-General, Department of Archaeology, Sri Lanka) has been published by the British Archaeology Reports. This is the major publication on Sri Lanka Prehistory after the 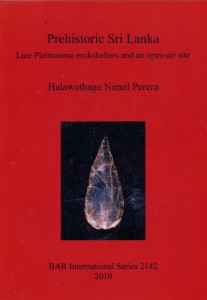 The abstract of the book is given below.

Sri Lanka is a tropical island that lies approximately halfway between Africa and Australia along the northern rim of the Indian Ocean and has one of the best recorded prehistoric sequences in South Asia. A review of its prehistory is a vast subject. The present study investigates the island’s  hunter-gatherer archaeology between the Late Pleistocene

and the middle Holocene, with lowland Wet Zone rockshelters as the principle topic of study.

This work synthesizes past and current archaeological research in the island as well as presenting new finding from excavations in the Batadomba-lena rock shelter and the open-air site of Bellan-Bendi Palassa. The Excavation of Batadomba-lena has provided fresh data for understanding human adaptations to the changing environment between approximately 36,000 and 12,000 years ago. A rainforest environment evidently persisted throughout this period in the environs of the site, but the climate was cooler at around the Last Glacial Maximum. Intensive occupation, succeeded by increased attention to the management of plant resources, followed the Last Glacial Maximum.

Microliths, small tools defined by the presence of blunting retouch, as well as the bifacially trimmed Balangoda Point and polished bone points, were evident from the earliest occupation. The symbolic capacities of the inhabitants were also revealed through the recovery of ornaments and ochre fragments throughout the sequence. The Batadomba-lena sequence has important implications for the Out-of-Africa theory on modern human origins, as well as Sri Lanka’s recognition of its cultural heritage.