The study report was done by the Mr. Wijerathne Bohingamuwa, DPhil/PhD Research Student School of Archaeology, University of Oxford. Some extracts from the report is given below and you can download the report from following link.

low price propecia
archaeology.lk like to take this opportunity to thank Mr. Wijerathne Bohingamuwa for his time and commitment to prepare this report.

Front Cover – The Moonstone for sale at the Bonham Auction in London – The Study ReportSome extracts are given below.

Publication of a web advertisement by the London based antiquity auctioneers Bonhams on January 10th 2013 under the title of “Rare Buddhist Anuradhapura period (377 BC – 1017 AD) Indian carved stone temple step discovered by Bonhams in a Devon garden will be sold in London” created a considerable public and media interest in Sri Lanka. Not surprisingly so as the artifact claimed to have originated from the Buddhist heritage of the island. The general demand by the public, media, and even some reputed scholars of archaeology and art history was to take measures for the return of the artifact to Sri Lanka. The Archaeological Survey of Sri Lanka, rightfully, decided to verify the authenticity and if possible to establish the provenance of the artifact by physical examination and research as a prerequisite for initiating the necessary course of action. Hence the author was formally appointed to undertake this task on behalf of the Director-General of Archaeology, Sri Lanka. Here is the resultant study report. 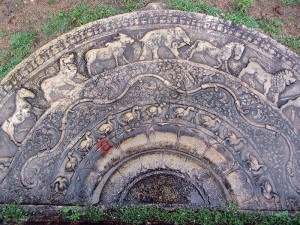 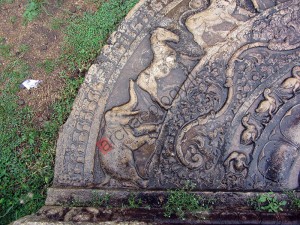 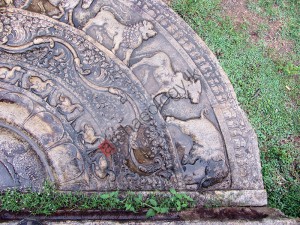 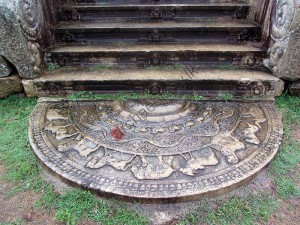 3.1 Description of the moonstone

The MBAL measures 146 cm (along the straight edge of the half-lotus side) X 123 cm (at the longest point from the half-lotus end to the semi-circular edge). The thickness of the moonstone varies from 14 cm in the semi-circular end to 18 cm in the center of the half-lotus end of the moonstone. The author could not, obviously, weigh the object and it is reported to weigh three-quarters of a ton5. The artifact is perfectly preserved (discussed below) except for the slight damage to the tusk of the last elephant in the southernmost end of the animal procession panel. Effects of fungi growth, however, is clearly visible on the carved surface whereas the opposite side is rather fresh.

Establishing the provenance and authenticity of artifacts detached from their contexts without any record is a challenging task. This is particularly true for artifacts in the antiquity market as the auctioneers purposely mask the provenance and true history of the artifact. Moonstone in Bonhams auction in London (MBAL) is no exception. If Bonhams’ account is accepted, MBAL is a genuine piece of art and it belongs to the Anuradhapura period of Sri Lankan history. However, its history cannot be traced beyond 1950. Though some scholars have traced the genesis of Sri Lankan moonstone to India, developed forms of moonstone as seen in the island are a unique creative work of Sri Lankan Art and Architecture. The MBAL artistically and thematically resembles late Anuradhapura period moonstones, specifically the moonstone number 10 (in Anuradhapura) of Godakumbure’s publication 1967 (MNG10). While there are a number of similarities between MBAL and MNG10, there are more important marked differences as well. In short, MNG10 and other known moonstones in Anuradhapura are of very fine quality and the details of the carvings are superior. Craftsmen have given more consideration to finer details of carvings since they had a message to convey and less attention to getting fine edges. The thickness of the stone slabs of Anuradhapura genuine moonstones seems much thinner than that of MBAL. The MBAL shows some evidence of weathering. However, considering the antiquity assigned to the artifact and the distance it is claimed to have traveled it may be expected to have born more evidence of wear and tear. Perfect preservation of artifacts under favorable circumstances is possible. However, when an artifact weighing three-quarters of a ton
travels over thousands of miles and moves over six times from place to place, it would be expected to witness the evidence of such a journey. Such evidence is meager in the MBAL. Under these circumstances, the antiquity and the authenticity assigned to the artifact, naturally, comes under the radar of suspicion. The absence of sufficient data – statistical, descriptive and photographic details as well as scientific evidence of material/rock types
used for making moonstones- of moonstones in the Island and that of the one in London makes it difficult to come to a definite conclusion about the authenticity of MBAL. However, the likelihood of MBAL being a replica of a genuine moonstone of the Anuradhapura period is quite high. Nevertheless, this does not mean to completely reject the claim that the MBAL is an original Sri Lankan moonstone.

Local geologists, archaeologists with a scientific background,s and geo-archaeologists tend to conclude that the material used for this artifact is granitic gneiss (high-grade metamorphic rock) commonly found in the North Central Province in Sri Lanka. Does this support the authenticity of the moonstone or the possibility of the replica, if it is the case, was made in Sri Lanka itself? Further research is needed, in my view, to answer these issues.

1. While our preliminary investigations seem to suggest a high possibility of the moonstone in London (MBAL) being a replica of a genuine Anuradhapura period moonstone, probably of the number 10 moonstone in Godakumbure’s 1967 publication (MNG 10) or a similar one, it is exceedingly advisable to undertake further research, inclusive of the scientific analysis of the material, on the moonstones of Sri Lanka and that of MBAL before reaching a final decision. The present study should be considered as a preliminary investigation upon which further research should be based. Data collected by such research may be evaluated by a national committee of experts for reaching at a final decision.

2. Unavailability of sufficient data on moonstones in Sri Lanka is a serious hindrance in this regard. It is highly desirable and timely that concerted efforts be made to collect all possible data including scientific evidence on the material used for moonstones and such data should be compared with that of MBAL.

3. Our consultation to determine the material/rock type used for the MBAL lead to two different views: local experts concluding it to be granitic gneiss while Oxford experts deciding it to be granite or micro granite. This issue may be resolved by petrological studies of the rock sample or examination of the moonstone by a geologist/geo-archaeologist. It is desirable to compare such data with those of the moonstones in Sri Lanka, particularly from

4. In dealing with the antiquity market not only the national and international laws and conventions such as the 1970 “UNESCO convention on the means of prohibiting and preventing the illicit import, export and transfer of ownership of cultural property” to which both Sri Lanka and the United Kingdom are signatories should be considered, but also the professional ethics largely agreed by professional and academic bodies of Archaeology and Museums should be given due consideration.

5. The officials in the Division dealing with the (illegal) export of artifacts and related matters at the Department of Archaeology should be enlightened in (the local antiquity laws which they are obviously conversant with) all international conventions on heritage to which Sri Lanka is a signatory. Moreover, it is necessary to know the antiquity laws and international conventions signed by countries with which they will have to deal in relation to heritage issues and antiquity markets. Knowledge of the professional ethics generally agreed by the archaeological bodies and museums is extremely handy in such efforts.

6. Sri Lankan missions overseas should be

updated with the information discussed in number 5. Such information helps them in taking prompt and efficient actions with regards to Sri Lankan heritage objects in the country they are stationed.

6. Beyond the issue of moonstone in London

1. It is highly enviable to take this opportunity to reflect on Sri Lanka’s antiquity laws, the national policies and priorities concerning the heritage in the island. As it is clear from the issue of the moonstone, the island lacks a satisfactory inventory of archaeological sites, monuments, and artifacts. This is particularly true for the areas recently liberated. Limited resources available to the Department of Archaeology make this task extremely difficult.

However strenuous and collective efforts should be made to survey the island and inventory sites, monuments, and artifacts, by mobilizing resources available in other relevant institutions particularly those in the archaeology departments in universities and the large number of graduates graduating from these universities annually. Considering the rapid development projects that are underway in Sri Lanka after the war, making such an inventory and a national database of prime importance.

2. Decisions on national heritage issues such as the moonstone in London advertised for the auction should be firmly based only on the antiquity laws of the island and international conventions to which Sri Lanka is a signatory and professional principles and ethics universally agreed.

Kotte Heritage 3: The Bastions and Passes

Kotte Heritage 2: The Ramparts and the Moat