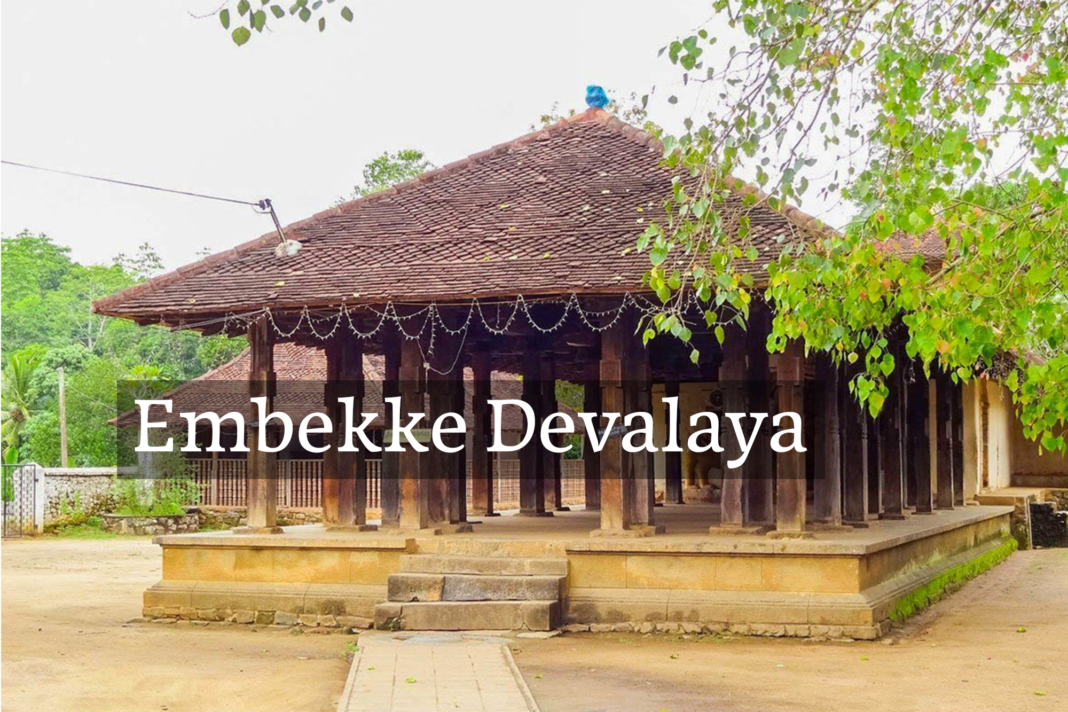 Embekke Devalaya can be considered a significant architectural edifice along with its finest wood carvings. Its history extends back to the Gampola period. The Devalaya is located in the Medapalata Korale of Udunuwara area of the Kandy District. This place is dedicated to the Deity of Kataragama. It is believed that the Devalaya was first built by King Wickramabahu III (1357– 1374 AD). The construction was later subjected to modifications by King Rajadhi Rajasinghe. It is recorded in history that it was a three-storied building. Today we can only see the remaining structure with the wooden pillars. The famous wood artistry of the Embekke Devalaya is said to be done by a skilled craftsman called Delmada Devendra Mulachari.

The story behind the construction

A fascinating legend states the construction of the Embekke Devalaya. It involves a drummer who was suffering from an incurable disease. According to the tale, he had been cured after visiting Kataragama Devalaya. In gratitude, he had promised the Deity Kataragama that he would visit the Devalaya annually to pay his respects. But with the time being as he became old, he was worried that he will not be able to make offerings for the deity. One day the God Kataragama appeared in his dream and has told him who had instructed him to do the offerings in a place where a miracle took place.

The drummer got to know such a miracle has happened in the garden of Queen Henakanda Biso Bandara; the chief consort of King Wickramarabahu. In the garden, there was a tree from which the blood would come out every time someone tried to cut it down. After knowing this incident, the drummer informed about the dream to the king and performed his offerings to this tree. So, with the royal patronage of King Wickramabahu III and the queen, a shrine was built in this place. Later, the building was enlarged and added splendid woodcraft by King Rajadhi Rajasinghe.

Architectural features of the Embekke Devalaya

The Embekke Devalaya provides an insightful display of the architecture adopted in ancient Sri Lanka. This construction consists of three main sections as the sanctum or Garbhaya in which the image of the God Kataragama has been housed, the Digge or Dancing hall) which is representative of the king’s consort Henakanda Bandara, and where dancing events were held in the times of the kings and also the final section is the Drummers’ Hall or Hewisi Mandapaya, representing the drummer Rangama who is involved with the back story of its construction and where musical events were once held.

Except for the Sanctum, the rest of the Embekke Devalaya is made almost entirely of wood presenting a breathtaking view for the visitors. The most significant place in this Devalaya complex is the Drummer’s hall due to its architectural features adorned with splendid wood carvings on pillars and doorframes. The building is 52 feet long and 25 feet wide and it is raised with the support of 32 wooden pillars. It is also built on a granite base about 34 inches high.

The wooden pillars within this building are made combining 2 different shapes as square and octagonal. The bases of the pillars are octagonal while their tops end in the shapes of four leaves stacked in a square created as Pekada. These pillars are made of a variety of indigenous woods such as Gammalu, Ginisapu, Burutha, Na, and Halmilla. It is stated that the core of the tree has been ripped off and taken away to make the pillars. Then they have dipped in oil and have been finely seasoned as the final process. It is due to this technique these carved wooden pillars have been preserved for so long.

The roof of this construction is also able to mesmerize the visitors with its unique design which showcases ancient Sri Lankan architecture. The most visible feature here is the fitted wooden clamp of the main beam on the roof which is called the Modal Kurupawa. This large wooden pin holds twenty-six rafters together at one end of the roof of the Digge (Dancing Hall), making it one of the most remarkable examples of ancient carpentry in this country. Another exceptional element is that the entire structure is made of wood, with no other materials being used, not even metal. Even the nails used to fix the rafters have been carved out of wood.

The entrance of the Embekke Devalaya is called Vahalkada. It is also graced with wooden pillars decorated with intricately detailed carvings. A section called the Antaralaya of this Devala complex houses a collection of antiquities with great historical significance. One of these is a pair of tusks offered by King Wickramabahu. There is a palanquin given to King Rajasinghe ll by the Dutch, which he thereafter donated to the Devalaya. A large number of other valuable items can be seen on display within the Antaralaya.

Other buildings within the complex

Additionally, there is a Paddy storage or Wee Atuwa; a native creation of the ancient Sri Lankans, within the yard of the Devalaya. It is built according to the Tampita tradition where the building is raised on a platform on stone pillars. It is 39 feet long and 13 feet wide. Even today, it is used to store and provide the required quantity of paddy for the offerings to God. The offerings are normally made three times a day. The walls have been made with wattle and daub.

Another building called ‘Embekke Gal Amabala’ can be seen in this vicinity. It is said that it is the place where the elephant used for the Perahara was cleaned and prepared. The stone pillars are used to construct this building and today only the ruins can be seen. The building has suffered due to the ravages of time and only a few of the pillars exist. The stone carvings on these are also fading fast with continuous exposure to climatic changes.

The most noticeable feature of the Embekke Devalaya is the carvings on the wooden pillars. There are various images carved into the sides of these pillars. The specialty of these carvings is each of them is different from one another. When we consider the carvings of the entire Devala complex, there are about 125 series of decorations, 256 festoon type designs, and 64 lotus designs, 30 decorative patterns, and roof designs. Thus, there are altogether 514 unique designs.

Out of these famous wood carvings, one of the most recognizable carvings is the Hansa Puttuwa, or entwined Swans. Others include designs of entwined rope (Lanu Gataya), sneezing face (Kisimbi Muna), festoon work (Liyawala), images of Deities (Deva Ruwa), hawk (Gijulihiniya) along with double-headed Eagles, dancing female forms, a mother breastfeeding child, wrestlers, soldiers fighting on horseback, birds with human figures and many more. One of the most unique carvings features an entwined elephant and bull. Here, covering the bull carving with one’s hand reveals the whole elephant, and covering the elephant likewise reveals the bull. It is an amazing example of the artistic expertise of Sri Lankan forefathers.

Being a monument of ancient Sri Lankan architecture and art, the Embekke Devalaya is a popular structure all over the world. The intricately detailed wood carvings which adorn the buildings have been able to get the attention of many scholars; both national and international. UNESCO recognized these wood carvings at Embekke Devalaya is one of the most outstanding collections of wooden pillar carvings to be found anywhere in the world. The carvings feature sophisticated examples of ancient Sinhalese art which have stood the test of time, being truly an icon of the Sri Lankan wood carvings.