Halawathage Nimal Perera, born on the 23rd of December 1953 is a prominent prehistorian of Sri Lanka and was the former Director of Excavations and Acting Deputy Director-General of Archaeology; he is currently the Director of Sabaragamuwa Province of the Central Cultural Fund.

He received his BA in Archaeology from the University of Peradeniya in 1979 and went on to receive his Masters from the Deccan College Postgraduate and Research Institute of the University of Pune, India in 1992 and his PhD in Archaeology and Paleontology from the Australian National University in Canberra, Australia in 2007. His area of expertise is in the pre-proto and early historic archaeology of Sri Lanka and stressing on prehistoric human ecology and is the country’s expert on lithics analysis.

He joined the Department of Archaeology of the Government of Sri Lanka in 1982 as a Technical Assistant in Excavations and rose up the ranks to Director Excavations. He was trained intensively and supervised by Dr. Siran Deraniyagala, the then Director-General of Archaeology and also was trained by foreign scholars such as the late Prof. V.N. Misra of India in analysis of stone tools and Prof. Salle of France at the excavations of Mahasthan, Bangladesh. He has directed a number of excavations in the late Pleistocene, early Holocene rock shelters and open air sites such as Batadomba Lena and Bellan-bandi Palassa where he pioneered application of geo-archaeological and bio-archaeological methods.

Out of his many publications, what could be considered his magnum opus is his Prehistoric Sri Lanka in the British Archaeological Report series (Oxford) which was the most important research publication on Sri Lankan archaeology during the first decade of this century. His other notable works are ‘People of the ancient rainforest: anatomically modern late Pleistocene foragers at the Batadomba Lena rockshelter, Sri Lanka’ in the Journal of Human Evolution Vol. 61 (3) which ranks in the 10th position of the top twenty articles in the World which awarded him the National Research Council Merit Award for Scientific Publication 2011, ‘First technological comparison of African Howieson Poort and South Asian Microlith Industries: an exploration of inter-regional variability in microlith assemblage’ in the Quaternary International 2014 which he Co-authored, and ‘Bone technology in South Asia from late Pleistocene rockshelter Deposits in Sri Lanka’ in Osseous Projectile Weaponry: Towards an Understanding of Pleistocene Cultural Variability VERT series, New York. 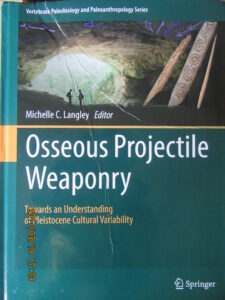