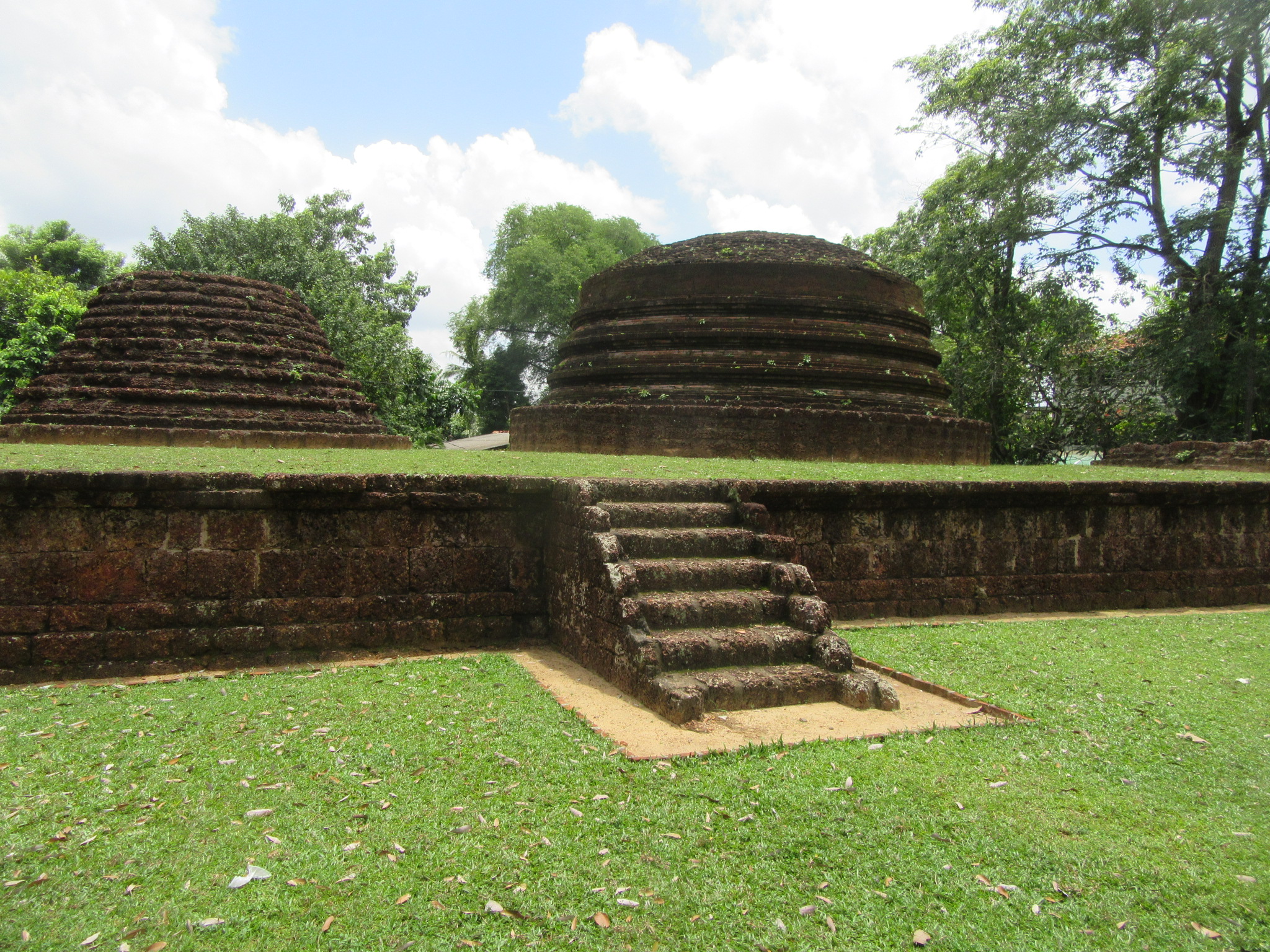 The historic 15th century Capital city of Kotte, founded as a fortress against the Arya Chakravarithi of Jaffna and made into a fortified city and administrative center by King Parakramabahu VI was the last Capital city to rule over a unified Sri Lanka until independence. Being the Capital, this city would have flourished with mansions of the royalty and nobility, great religious monuments of the Buddhist Viharas, dwellings of the common people and buildings of trade and commerce; the local literary sources such as the Sandesha Kavyas and the accounts of the foreigners such as the Portuguese describe this magnificent city in all its glory. Yet what remains at present is a fraction of what it was during its heyday. The previous articles in this series have discussed the various remains of the fortifications of Kotte. The present article explores yet another prominent monument known to many in Kotte; the Veherakanda ruins in Baddegana.

The ruins of Veherakanda can be found at the end of Beddegana road in Kotte and comprise of a large platform with two small stupas and traces of other buildings around. This is the only one of its kind found in Kotte at present. The ruins have not been identified despite archaeological excavations conducted there in 1949 and various theories have been put forward regarding its identity. This well-maintained site is generally considered a religious site but some say them to be tombs. Mr. Prasad Fonseka in his book KOTTE: THE FORTRESS states that the two stupas belong to the Kotavehera style, which is generally thought to be tombs; the prominent feature being the absence of parts of an ordinary stupa. Accordingly these can be the tombs of Sunetradevi, the mother of King Parakramabahu VI and Vidagama Thero, the two most important persons to Parakramabahu. But however no evidence can be found to support any theory. Taking it into its historical background, this would have been placed in a location outside the outer city of Kotte. Such monuments, be them religious or civil would have no doubt been spread throughout the area around the capital city, hence whatever this may be, it would always be a monument to Kotte’s past.

Excavations were first conducted here in 1949 under Prof. Senerat Paranavitana. In 1946 steps were taken to acquire the site by the Department of Archaeology and finally this 2 acre land was taken over on the 19th December 1948. Upon acquisition this site was overgrown by shrubs and had even been once cultivated; folklore on the site had not prevailed and its identity was entirely unknown expect for its name- Veherakanda meaning Vihara mountain. The survey found the mound had been disturbed but not in recent times. The excavation revealed two small stupas on a large rectangular platform measuring 97 x 53 feet and a height of 5 feet 6 inches made of kabook. Stairways were found to the north and west with only a small section remaining. The base circumference of the larger stupa was 30 feet and the smaller stupa being 21 feet, with the large stupa being made of bricks and the smaller one made of kabook. Parts of the Pinnacle or Kothkaralla were found scattered around. To determine the identity of these, the larger stupa was examined further which revealed two relic chambers but were found empty, having being robbed of its antiquity. 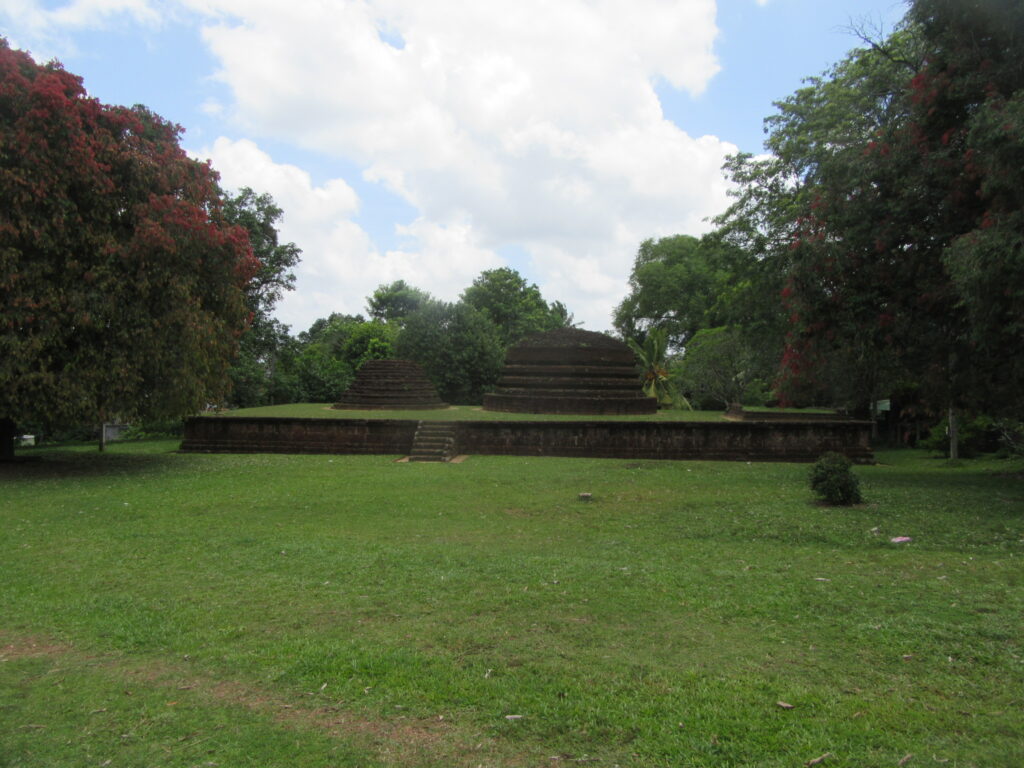 Kotte being a suburb of Colombo in the mid-20th century was populated to a large extent and an archaeological excavation in the midst of this suburb drew much attention; it is recorded that in one week there was a crowd of approximately 25,000 visitors and a fence had to be erected to allow the large crowds gathering to view the site without causing damaging. It is recorded that work had to be halted for a week in order to allow the visitors to access the site. Prof. Paranavitana states that they received much support from the residents and also of a case where a gypsy poet had sung poems (kavi) of the excavation, printed on leaflets and sold in the area of Baddegana.  To the northwest was also found the remains of another building measuring 22 x 12 feet; this would have been used as an image house. To the north of the platform was found the remains of yet another building, the survey revealed tiled pieces around but when excavated no foundations were found, only mortise stones for fixing wooden pillars arranged to a pattern were found. It is believed that the walls of this would have been made out of clay. One of the most interesting finds was found under one of these mortise stones; a copper casket measuring 1.5” x 1.16” x 1” and within it were found few semi-precious stones and a gold coin. 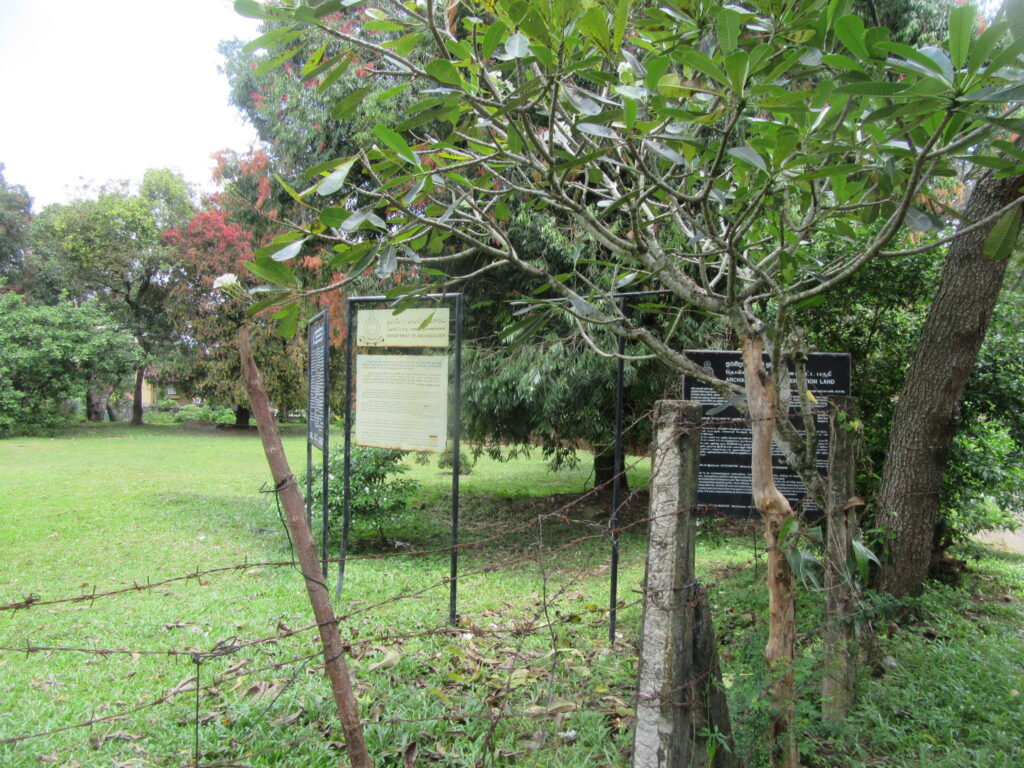 Although this excavation failed to identify the location, it was no doubt revealed to belong to the Kotte period and hence offers an insight into the construction of buildings during this period. The conservations too were conducted within that year and the large kabook blocks of the front section of the platform had to be replaced as the original blocks had decayed. Prof. Paranavitana states that this might have not been a prominent monument as it does not fit the description and location of the prominent monuments described in the Sandesha Kavyas; but it would always stand as a testament to the heritage of Kotte. 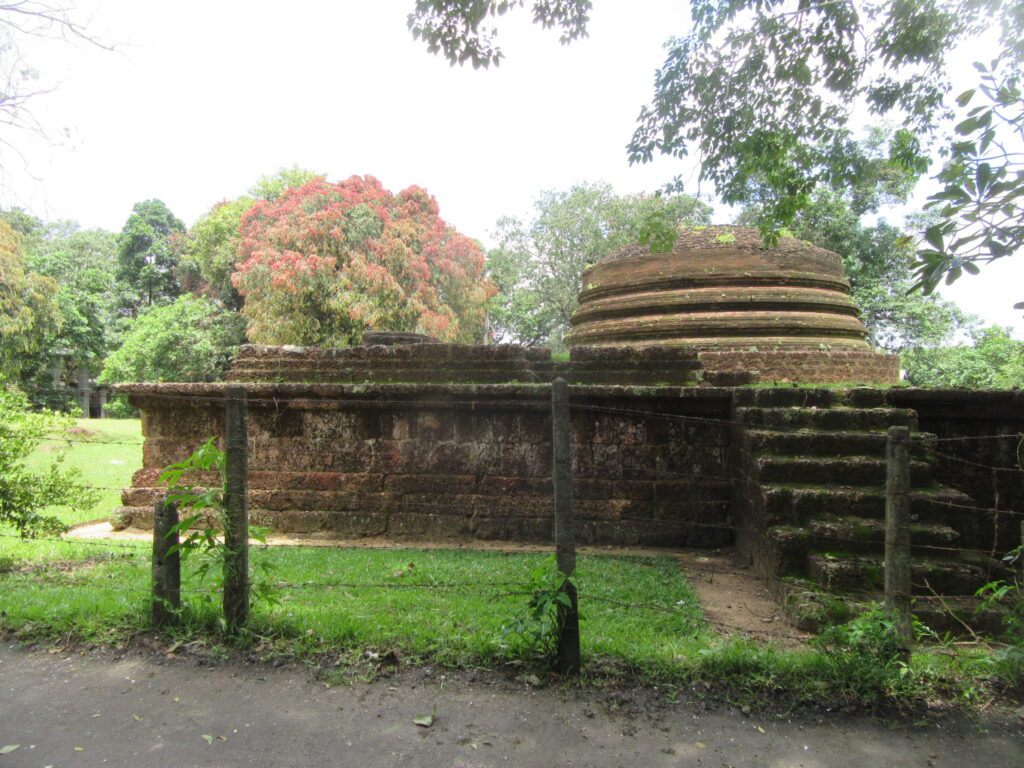 To arrive at the site one coming from Rajagiriya would have to turn down Ehtul Kotte road and from Baddegana junction turn left on Beddegana road and from there take the north Baddegana road (to the left from that junction). from here there are several ways to the site; the prominent way being to proceed along North Baddegana road till it takes a 90 degree right turn and from there continue passing the Bo-tree junction till the end where it meets Wehera Kanda road. From here turn left and taking the left at both the ‘Y’ junctions down it, one would come near the site which is fenced and the sign boards of the Archaeology Department.

The ruins are at present well maintained in a beautifully landscaped garden with iron wood trees. The sheer size of the platform states its majesty and would have been an imposing site in its heyday. The two stupas on the platform are also well preserved and when entering the platform to the right of the large stupa in the corner can be seen the remains of the image house. The remains of the building found north of the platform can hardly be seen as per a visit in September 2017 as the weeds around it have covered its form. Set in a quiet neighbourhood it is one of the most important monuments surviving in Kotte at present and is a must see site for all. 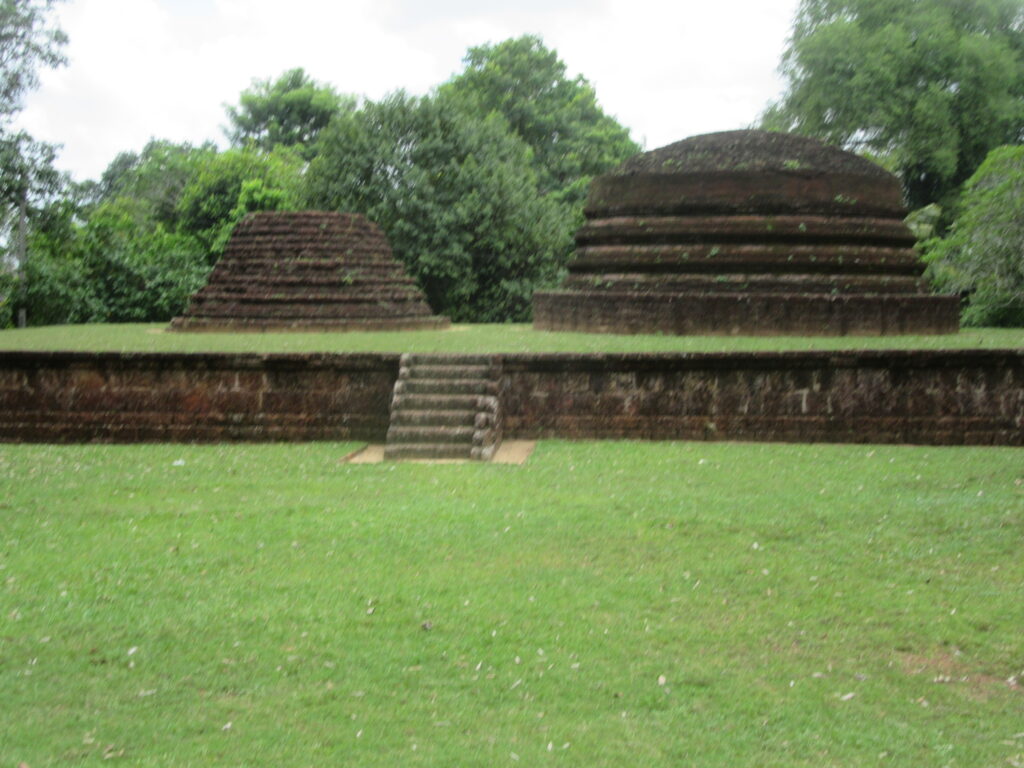 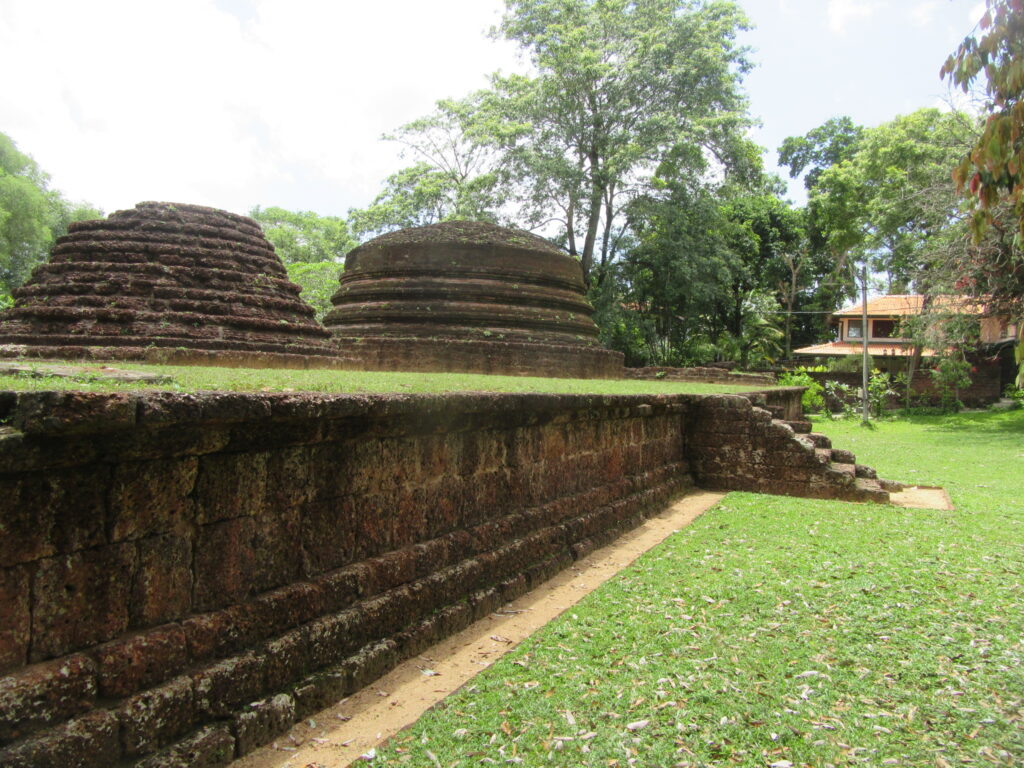 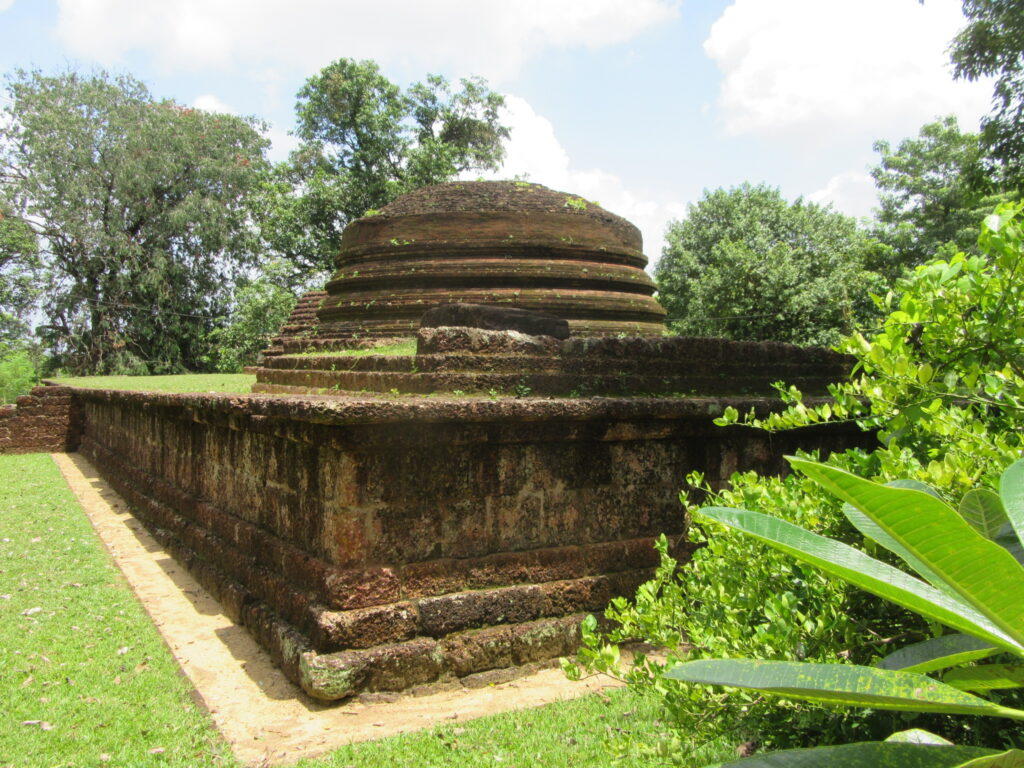 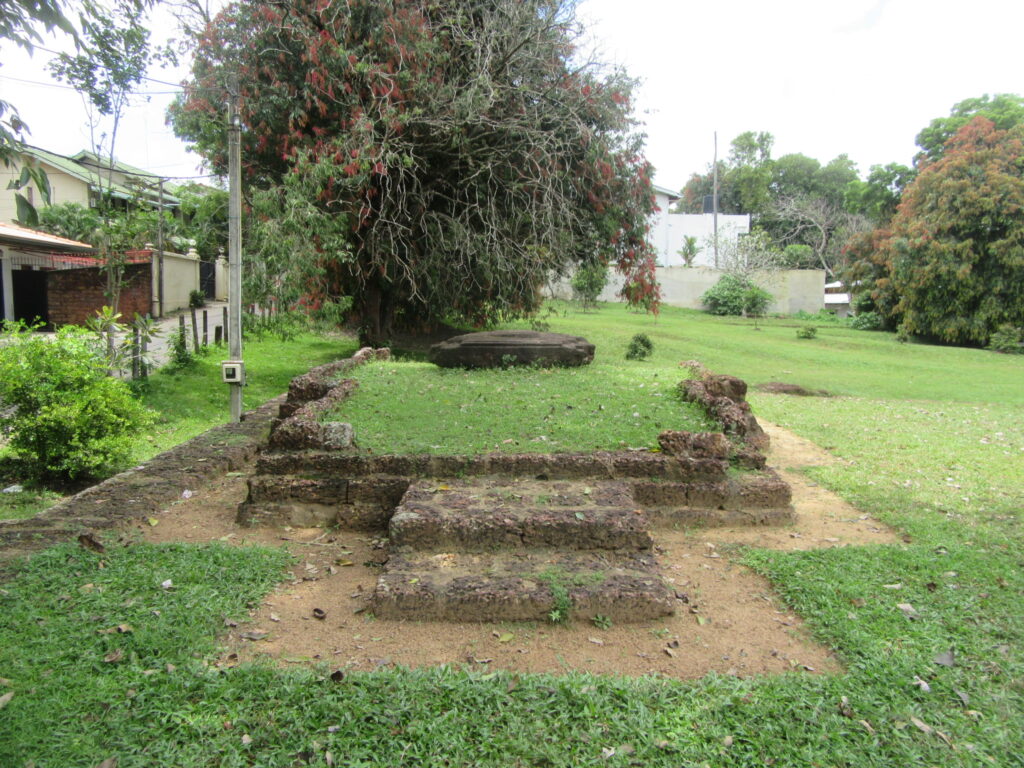