Pulligoda is a small cave containing paintings of the Anuradhapura period situated on a small rock outcrop several hundred meters from the base of the south face of the Dimbulagala Mountain. 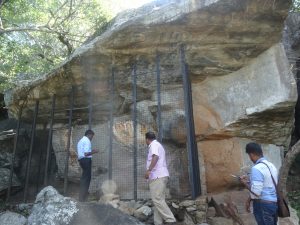 To arrive here, one must travel pass the Dimbulagala Rajamaha Viharaya and after passing the tank, take the first large gravel road to the left leading to the area of Millana. About 300 meters down this road one would find a sign board to the left indicating the site. The path from here is motorable for about 100 meters and from then is a small hike up a recently erected paved path. At the end of the path one comes a cross the cave with the stunning paintings, now protected by an iron fence by the Department of Archaeology.

The paintings are the surviving portion of a once larger painting which would have adorned the cave wall. The surviving paintings, found on the back wall of the cave comprises of a fragmentary figure to the left and five seated figures to the right. The colours are of red ochre, yellow ochre and green earth. The five figures are males seated on lotus cushions; the first four with joint hands and the last holding a flower. They wear crowns on their heads surrounded by a halo and their upper bodies are adorned with jewelry with dresses below the waist. The fragmentary figure to the left is believed to be a female. 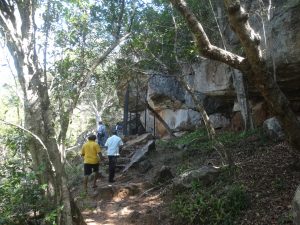 These are thought to be sages or gods venerating the Buddha. Based on the stylistic elements, various dates have been proposed by scholars, from the 4th century AD, to the 7th century AD and even to the 12th century AD. But it is generally accepted that these belong to the Anuradhapura period. The remarkable preservation of these paintings put them on par with the other few surviving paintings of those times such as Sigiriya.  Just above this cave is found another cave with traces of a Brahmi inscription barely readable. 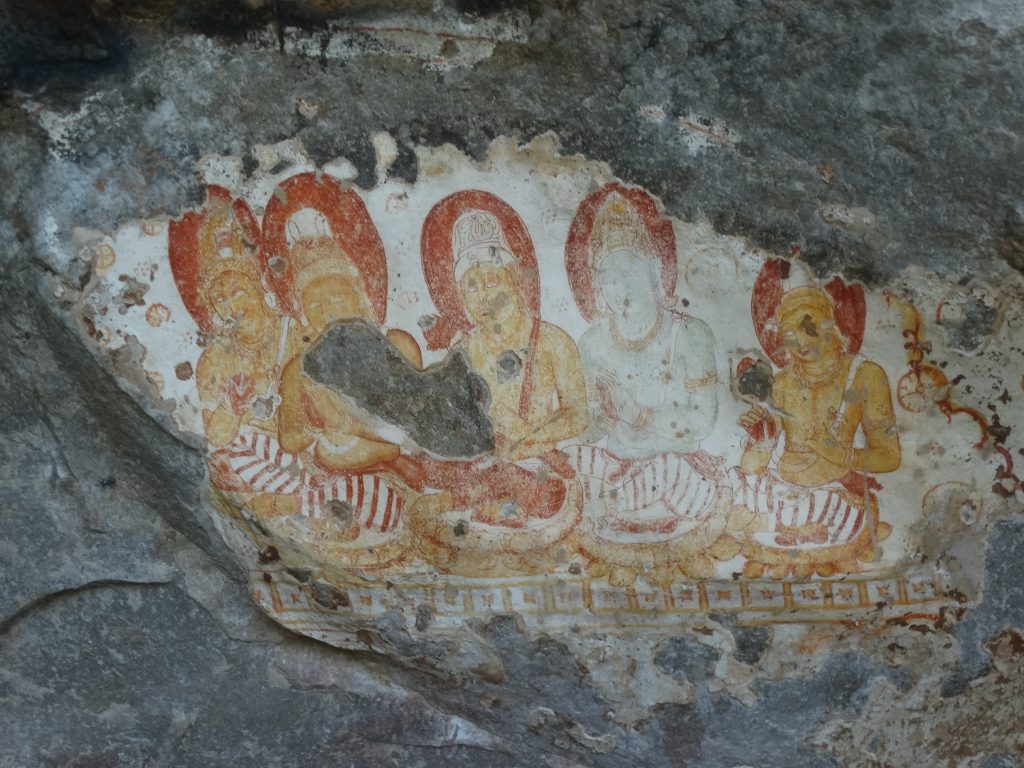 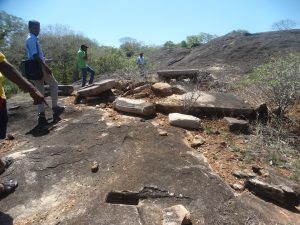 meter hike through a clear path to this site. The site of Molahetiwelagala is situated on an open rock outcrop and consists of traces of a building with a perfectly preserved square granite pedestal. According to folklore, this is the site of the building used by the Arahat Maliyadeva to deliver the Ariyawansha sermon. Many other stone works with mortises could be seen scattered about the place. The most important artefacts found here are the four rock inscriptions situated several feel away from these ruins, which fall between the 1st century BC and 2nd century AD (early Anuradhapura period). 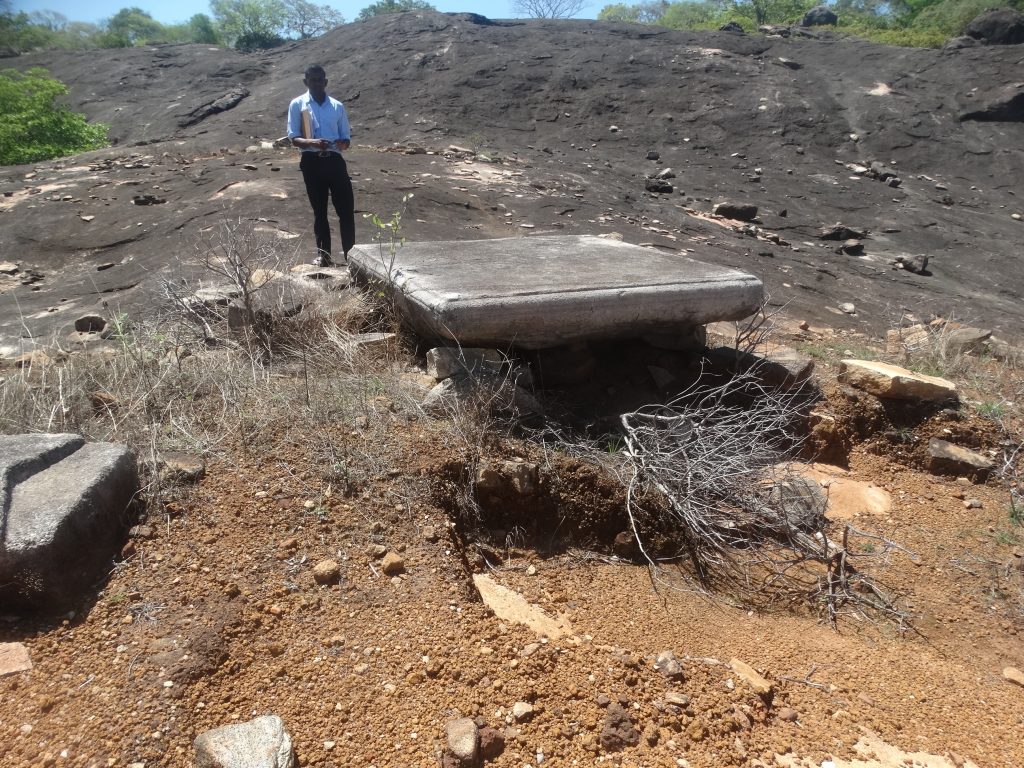 The most notable inscription found here are in effect two inscriptions which are to be read as one, and are incised in four lines of bold deeply carved letters enclosed with an outline frame; on the left at the beginning of the first and fourth lines can be found two Swastikas. The first inscription states the donation of a canal to the monks of the Pilipavatha monastery in the Ataraganga country by a King Abaya along with his genealogy.

“Hail King Abaya, eldest son of King Kutakana and grandson of the great King Devanapiya Tissa, dedicated with the golden vase (i.e. having poured water into the hands of the done with a golden vase), the canal of Gana..taka in the Ataraganga (country) to the monks in the Pilipavata Monastery”

The second reads the “The Great King Naka gave to the community”.

According to Prof. Senerat Paranavitana, the donation made in the first inscription would have been engraved during the reign of the King in the second inscription. He identifies the monarch Abaya as Bhatika Abaya and his father as Kutakanna Tissa and grandfather as Mahaculika Mahatissa, and the King Naka as Maha Naga, the brother of Bhatika Abaya; all of whom fall into the first century AD. According to him, the ruins at this site are the remains of the Monastery named Pilipavatha as mentioned in the inscription.

Another two inscriptions situated in close proximity to the above are one of the reigns of King Kutakanna Tissa which mentions an offering made by his wife, Queen Anula to Pilipawatha monastery; and the other, a donation by Sena, son of Vasaba (not identified), of the tanks of Katelavasaka and Ahuraviki  and other donations to the Pilipawatha monastery.

This site is in a neglected state and traces of treasure hunting are evident. Further the layers of the rock surface appear to be peeling off, which poses a threat to the valuable inscriptions.

The site of Kosgaha Ulpata contains a large cave with the remains of a reclining Buddha as well as another location known as the ‘Vee-atuwa’; this is found at the base of the southern face of the Dimbulagala Mountain. Passing the turn off to Molahetiwelagala on the same road, one must travel about 2km along the narrow gravel road which runs parallel to a stream till one reaches a large Banyan (Nuga) tree. From here one must cross the stream and enter the forest from which is a traceable footpath. The path leads up to an open rock surface and crossing a tiny stream, one needs to turn left from where the footpath takes the form of a stone stairway. Arriving from this stairway one arrives at the large cave. The cave is divided into four chambers with its walls still intact. In the third chamber from the left is the large reclining Buddha made of bricks. The upper portion of the figure has been destroyed with only the left hand and the waist and below in its original form.  An interesting feature found here are the traces of three deity figures on both walls of the chamber. The wall to the right contains shapes of two figures made from the bricks of the wall and with a single figure on the left wall. Several granite artifacts which would have once made up of this ancient image house could be found lined in front of the chamber of the cave. 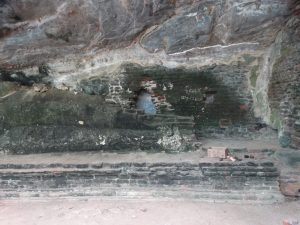 The site known as the ‘Vee-atuwa’ can be reached by taking the path to the right from the cave. Here one needs to climb boulder to boulder along the edge of the large rock which makes up the cave to arrive at this site. One of the most astounding remains found in the Dimbulagala region, this is a chambered drip ledged cave situated high above the ground level and requires a tall ladder to climb. Its walls are well preserved and containing a door and two windows on either side with their wooden frames still intact. Further by the side of the place where the ladder would be placed can be found a Brahmi inscription. Despite its inaccessibility, it has not survived the hands of vandals who have managed to inscribe their names on the plaster.  Its inaccessibility due to its height and the thick jungle in which it is found offers this site a perfect place of refuge in times of distress, thus its function could be thought of something more than just a meditation chamber. 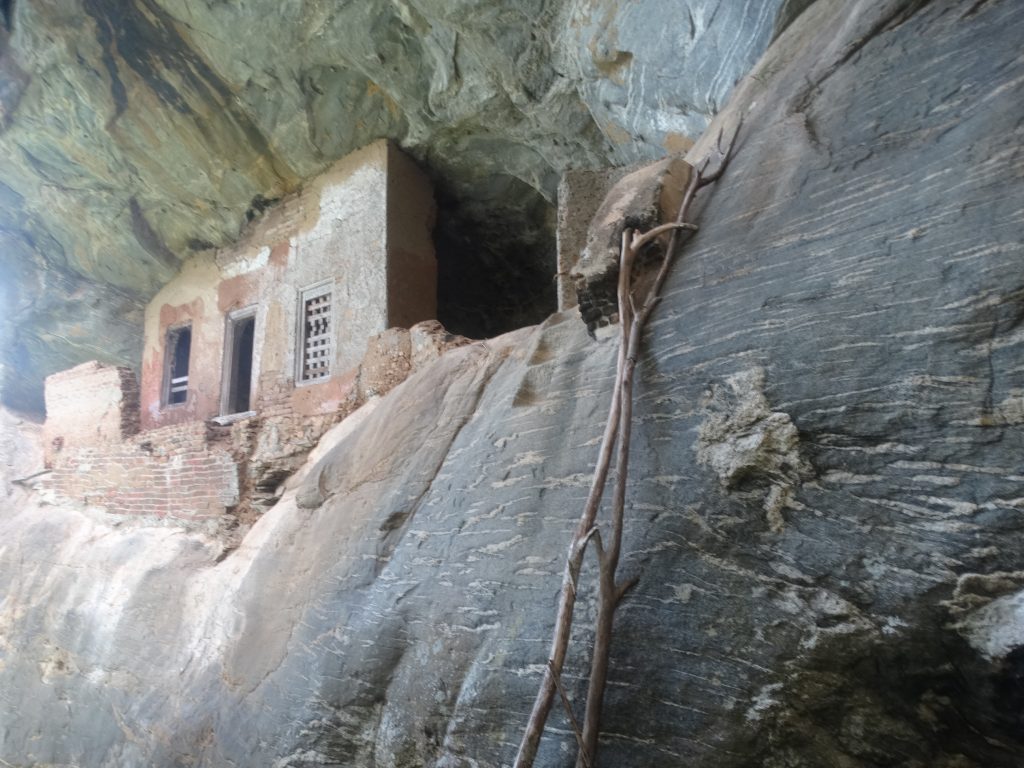 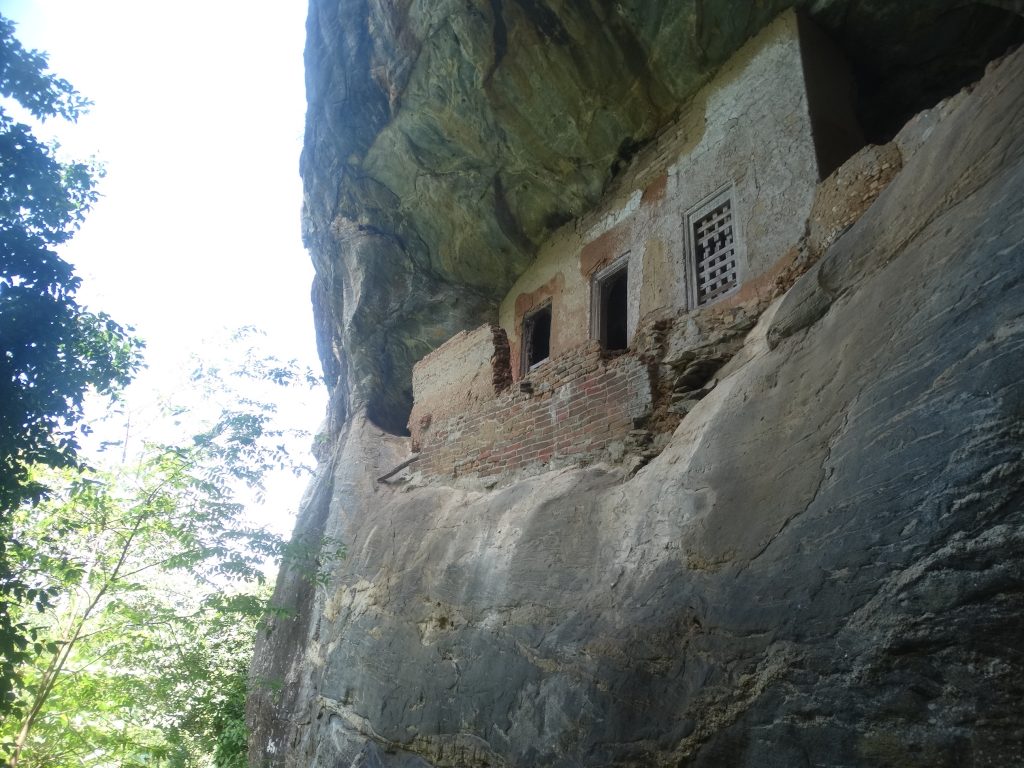 Information of these sites are based on a field visit by Chandima Ambanwala, Sameera Prasanga, Buddhika Konara, Chamal Senadheera, Kasun Darshitha, Asanga and myself in August 2017 as part of a survey of sites in Polonnaruwa from archaeology.lk

Interview of Chief Incumbent of the Namal Pokuna Viharaya.