Passes and bastions are important elements of fortifications. The Passes, large and small give access to and from a fort and at times of war would be heavily guarded. Bastions are fortified projections on the ramparts of a fort from which defenders could easily defend the rampart as well as attack enemies due to its wide angle of fire. The fortress of Kotte was equipped with both these elements.

The fortress of Kotte had 6 minor passes and one main land pass giving access to the outside world. The main land pass was through the Outer city in the south. This was around 200 feet in width and protected by the outer moat on both sides and granite stone walls along the moat along with two bastions. This main entrance to Kotte is at present north of Pita Kotte junction near the Sirikotha. There were further two minor passes to the outer city situated on the outer end of the moat.

In the inner city there were 4 minor passes apart from the inner city gate in the south. One pass lay in the northern tip of Kotte and was fortified with a drawbridge to the road towards Colombo. On the northeast of the inner city rampart was the Kantagantota pass and with the other two passes situated on the two edges of the south inner city rampart. The 6 minor passes were created through narrow channels across the lake and the mud layer that surrounded the fort. These passes would have been small concealed openings in the rampart which could have been easily defended during a siege. It is important to note that the fortress of Kotte was designed on that of the Indian city of ‘Mithila’ mentioned in the Ummaga Jataka and accordingly Mithila too had 7 passes to the city.

The bastions are recorded to have been built of granite instead of Kabook from which the rampart was built and they were placed at the entrances to each pass for their protection. Two bastions each guarded the main land access in the outer city and the inner city gate at the inner city and one bastion each protected the rest of the passes. Apart from these defences that were created before the arrival of the Portuguese, with their arrival and subsequent guardianship of the city of Kotte, they too erected defences at the inner city gate and the main land pass in the form of a vallation (a defensive structure like a bastion). Further the ancient Sinhalese chronicles states that Devalas and Kovils were built on top of the bastions. 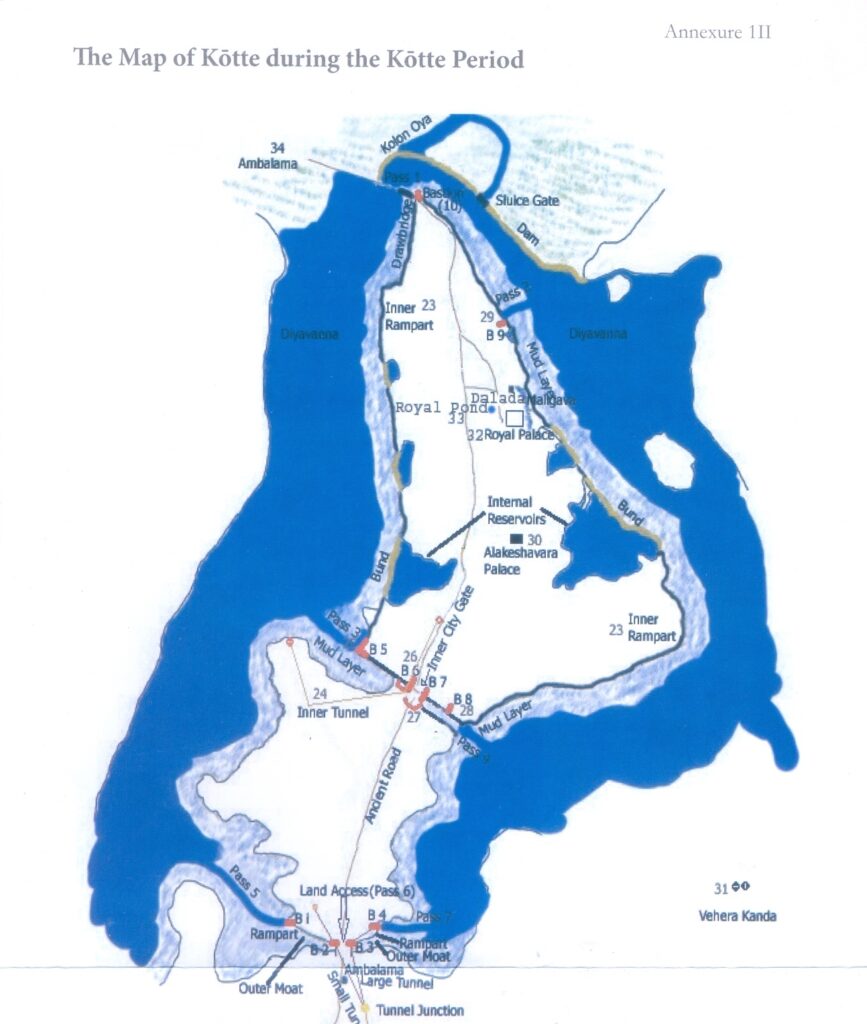 At present very few of the remains of the above features can be identified. From the bastions, only the Angampitiya bastion which was on the western end of the south inner rampart can be seen and scanty remains of the draw bridge of the northern pass and the entrance to the Kantagantota pass can be seen. The following will go according to the numbering of the Passes and Bastions of the above map.

This was situated on the northern tip of the fortress of Kotte and gave entrance to the road to Colombo. This pass was known as the pass of Ambalama and fortified by a bastion and a draw bridge. At present it is would be the location between Morris Rajapakse Mawatha and Jayanthi Mawatha bordering the Parliament road soon after the bridge from Rajagiriya. Remains of the draw bridge, first identified by Mr. Prasad Fonseka of the Kotte Heritage Foundation can be found in the premises of the Lions Club on Morris Rajapakse Mawatha. Here 3-4 large stone pillars could be found which are believed to have been supporting pillars to the draw bridge.

Heading along the eastern inner city ramparts from the north, this was known as the Kantagantota pass and could be found at present in the Parakumba Pirivena. A conserved section of the rampart is found running across the Temple premises and the opening in the middle of the rampart is where the pass would have been. The bastion would have been in close proximity within the present Temple premises but no remains can be found at present.

These two bastions would have covered the entrance to the inner city from the outer city. at present no remains of the bastions can be seen as the present Ethul Kotte road runs through this section and the area has been completely built up. A section of the rampart coming from Angampitiya bastion can be seen in the Salvation Army Church premises. The Portuguese sources state that they had built a defensive structure known as a vallation at this entrance, this too could clearly be seen on the Dutch map.

This pass and bastion was situated at the western end of the outer city moat and rampart and at present would be in an area somewhere down the southern end of 4th Lane. The bastion would have given entrance to the pass through the shallow mud layer here through the lake. This is situated at a lower elevation than the main land pass (Ethul Kotte road area) thus would have been ideal for as a pass as the entire approach could be seen from the higher elevation areas with much safety.

Pass 06 was the main land access to the fortress of Kotte just north of Pita Kotte junction and the bastions were built on either side of the main land pass. At present no remains can be found and these would have been situated on either side of the Ethul Kotte road where the present Janatha Sevaka Sangamaya building is and another building on the opposite side. In the centre of this, the Portuguese had built another vallation for further protection.

This pass and bastion was situated on the eastern end of outer moat and rampart. At present it could be traced to a location down Ranpokuna Mawatha. This too is in a lower elevation such as Pass 05 and Bastion 01 but no remains can be traced.