Excavation of a Protohistoric Canoe burial Site in Haldummulla – 2010

A location of archaeological importance was identified in late December 2009 in Haldummulla of the Haputale District Secretary’s division of the Badulla District in Uva province. This location is in the midst of a minor road leading to the Tamil school of Haldummulla. The place was first observed in 23rd December 2009 and identified as a clay canoe burial site which is almost similar to the one that was excavated in Ranchamadama in theRatnapura District in the year 2007 (Somadeva et al 2007; Somadeva 2009). The occasion when the first observations were made at the present site, parts of a single clay canoe were found exposed due to the erosion of the tar-layer of the existing road. The excavation in the year 2010 was initiated as a part of the Archaeology of the Uda Walave Basin project initiated by the Postgraduate Institute of Archaeology since 2005 (vide. Somadeva 2010). Fieldwork was carried out for a period of six weeks since 14th August 2010. 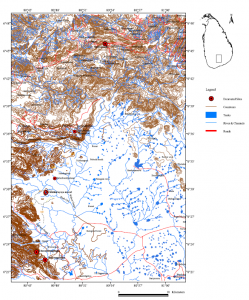 Physiographic setting of the site at Haldummulla and the other sites in the Uda Walawa basinBurial canoes are situated at a location of a rolling terrain of the southern slope of the central highland (see fig.1). The approximate elevation of the area around the present site is 1010m MSL. The existing slope angle of 42º suggests a localised aggradational environment dominated by the continuous erosion and sometime the occurrences of destructive land-slides towards an eastern direction. According to the information provided by the local inhabitants, this road was a foot-path before it was widened in order to make access to the newly constructed Tamil school in 1970s. This road functioned as one of the main access paths to the Soragune Devala which is a highly venerated 18th century shrine devoted to the God Kataragama that is situated about 3km west to the present site.

The surrounding landscape of the location was subjected to intensive recent modifications during the process of widening of the road. Use of heavy machinery for ground levelling had made destructive consequences to the burial canoes in the sub-surface. The surface of the banks on either side of the road consists of a low density scattering of artefacts including ancient potsherds and burnt clay lumps that could be identified as belonging to the burials.

6×2.5meter square was demarcated as the excavation trench. This area covers the locations of three individual burial canoes situated in the midst of the road (see, fig.2). 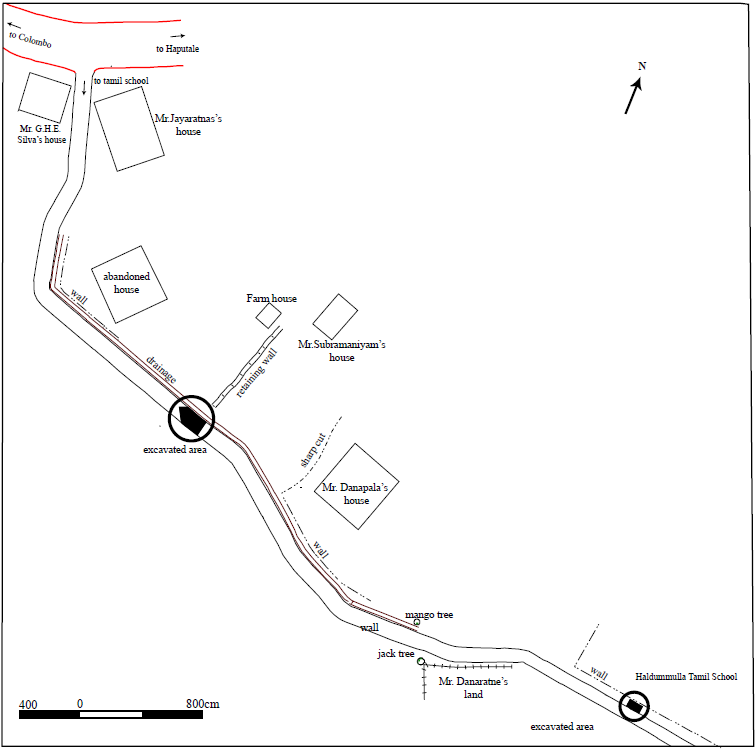 The tar layer and the rubble pavement of the road of the demarcated area have been deliberately removed as a prerequisite of the excavation.

There is no complex stratigraphy observed at the excavated location. Only two soil horizons were recorded. The upper layer is a deposit that has two morphological characteristics. It has a sedimentary characteristic which was enhanced by the slope gradient of the terrain. The content derived from the decomposition of the leaf-fall and the accumulation of cow-dung is the other constituent of this layer. Ancient potsherds found here would have been due to the disturbances caused at the site during the road construction.

The second layer is the basal one that was developed through the weathering of the parent rock. This layer is devoid of any cultural material. The burial structures were planted in this layer. Interface between these two soil layers is very clear.

Excavation has yielded two clusters of clay burial canoes. Cluster A is situated at a middle level of the slope in the midst of the road leading to the Tamil School. Cluster B is at a location bordering the school premises to the left of the road.

Cluster A– This cluster consists of three individual burial canoes (canoes 1, 2 &3) constructed a few meters apart. Orientation of all the canoes is north-south. Careful study suggests that this placement was intentional as a precaution  from the predictable hazards caused by the flow of rain water in the slope where the canoes were constructed.

Canoe 1 (fig.3) is the largest in the cluster (L.3m x W.1m x D.0.5m). Close observations suggest that the distal end of the canoe was damaged during the road construction. However the charcoal layer on the bottom is less affected by such activities. An assemblage of ancient potsherds was recovered from the interior of this canoe. Earthenware includes Black and Red ware and Plain Red ware shreds. In comparison with other clay canoes excavated in Haldulmulla as well as in Ranchamadama, one of the peculiar characteristics observed in the present canoe is the void space reserved at the proximal end of the interior. Neither the fire nor vessel deposition was involved with this space. Purpose of this act is unclear.

Canoe 2 (fig.4). (L.1.95m x W. 0.8 m x D.0.52m). This canoe had been destroyed through various activities during the recent time. Most obvious and crucial among them was digging a trench to systematize the drainage as a part of the road construction. Interior space was totally destroyed and only remaining parts are its walls on the southern side.

Canoe 3 (fig.5). (L.1.85m x W. 0.9m x D.0.43 m). Distal end of this clay canoe has been destroyed by the road workers. Excavation of the interior space has revealed an accumulation of modern garbage including fragments of liquor bottles. A small pit observed at the proximal end of this canoe is a hole dug out by treasure-hunters. Several potsherds of urns deposited in the interior were discovered.

Cluster B– Another two clay canoes were observed at a place situated about 75 meters east to cluster A. These two were remaining in-tact by the side of the same road and just in front of the Tamil school, at the time when the first observations was made (orientation north-south). Due to the time constraints it was decided to open only one canoe in the cluster.

Canoe 4 – (fig.6). (L.1.43m x W. 0.58m x D.0.55m). This canoe is relatively small in comparison with the other excavated canoe burials. The characteristic feature excavated from the interior of it was a log of burnt wood remaining on the bottom of the canoe. Except quartz stone implements several natural stones that were of a metallic origin were also discovered. It appears that such stones were purposely deposited together with the stone implements.

Except 36kg of ancient potsherds excavated, the other artefacts excavated are (a. stone implements (quartz) and (b. a fragment of iron. All the artefacts indicated in the table are stored at the Field Archaeology Unit of the Postgraduate Institute of Archaeology under the direct supervision of the author. Anyone could access the artefacts by referring the respective catalogue numbers.

The site: after excavation

There was a rising demand by the public in the area to conserve the site after excavation. This issue was discussed with the Chairman of the Pradeshiya Sabha of Haldumulla and the Divisional Secretary of Haldummulla in order to obtain funds to carryout the conservation. The Chairman of the Pradeshiya Sabha has agreed to provide funds to conserve the site with the assistance given by the Regional Director of the Department of Archaeology in Badulla. An officer from the archaeology department attended the preliminary discussions with the regional administrative authorities. Measures have been taken by the Haldummulla Pradeshiya Sabhava to build a temporary hut at the site until the proper conservation work starts.

Somadeva R., et al 2007. Advanced Hunter gatherers or Conservative farmers : A note of the excavation of earthenware Burial Canoes at the village Ranchamadama in Sabaragamuwa Province , Sri Lanka. Journal of the Indian Ocean Archaeology,  No.4.