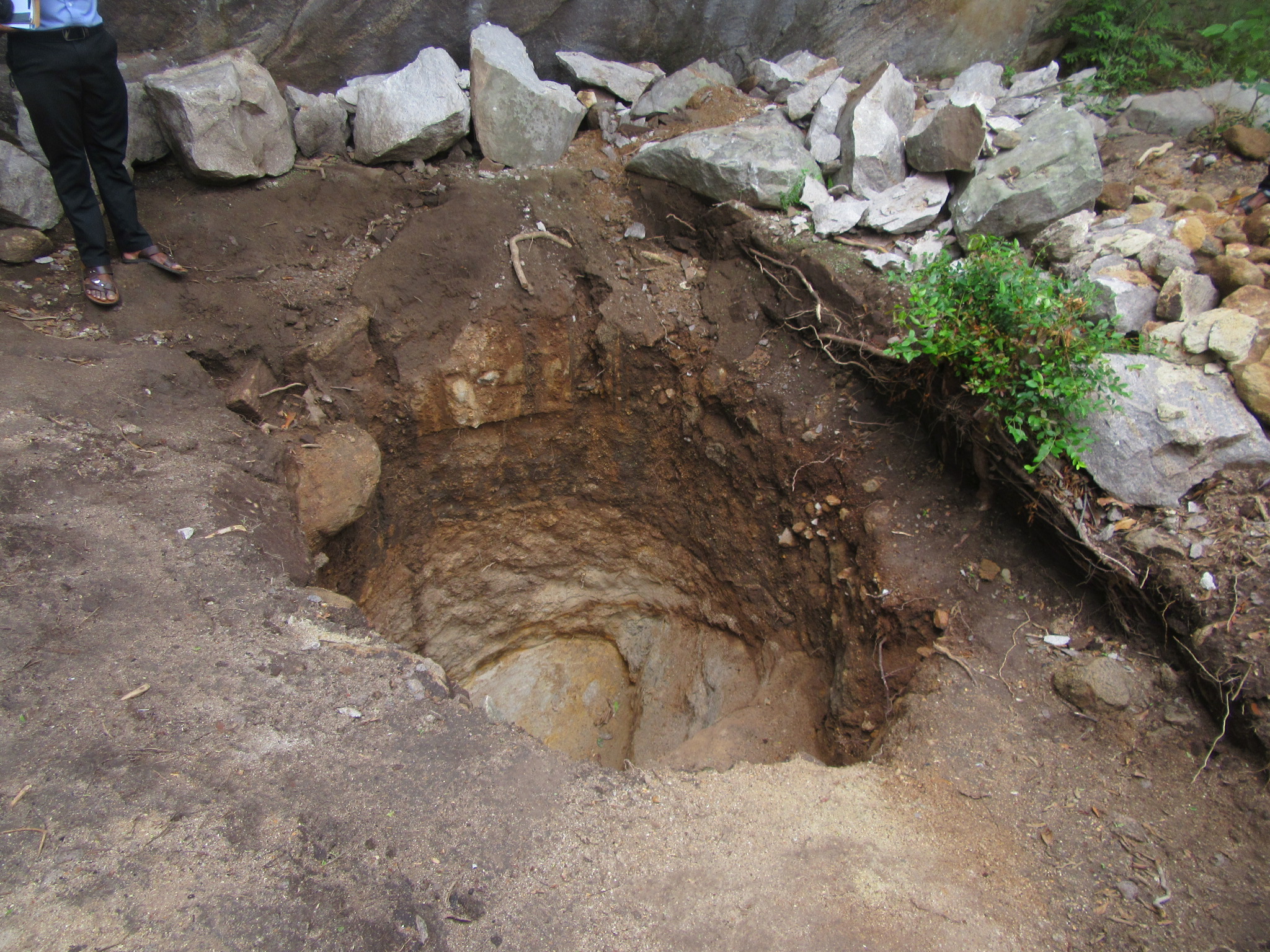 Muthugala in Polonnaruwa is an enchanting location set amidst rocky outcrops and willus and houses the remains of a forest monastery inclusive of ruined stupas and drip ledged caves for the meditation of monks. This is a hardly known site and came to our light during a recently concluded archaeological survey of the Polonnaruwa District. Our research team comprising of Messrs. Chandima Ambanwala, Sameera Prasanga, Buddhika Konara, Chamal Senadheera, Kasun Darshitha and myself along with our resource person Mr. Attygala visited the site in August; accompanying us as guides were three men from the village including the village headmen. A union of history and nature, this was one adventurous exploration which deserves a deeper investigation.

Muthugala, a quiet dry zone village situated in the Welikanda Divisional Secretariat in the Polonnaruwa District is a paradise of nature where man and wilderness live side by side. This untapped archaeological heritage of the ancient Sinhalese lies in the forests boardering the village and the Flood Plains National Park along the Mahaweli Ganga. To arrive here, one needs to arrive at Sewanapitiya junction which is 18km from Kanduruwela on the Batticaloa road and from there turn left on the road running along the canal, proceeding about a kilometer on this turn left once more along with the branching off of the canal. From there proceed along this for 5km passing lush green fields and home gardens to the village of Muthugala; from there turn left from the school along the bund of a small tank till the road ends at the forest, from there is an off road track which is a 10 minute hike to the site. The remains of the forest monetary is spread throughout that area on the rock outcrops surrounded by willus created by the Mahaweli River. 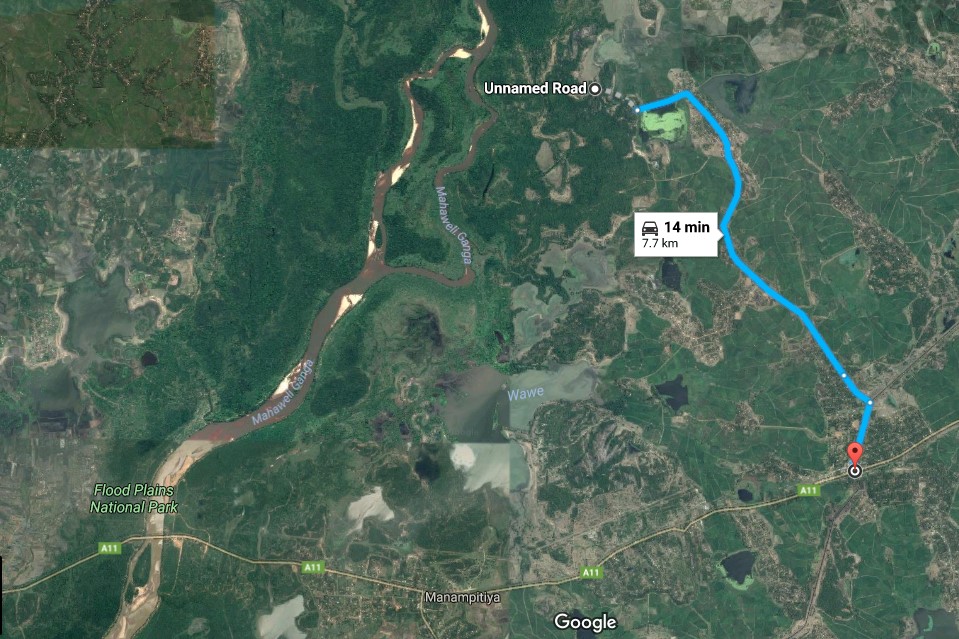 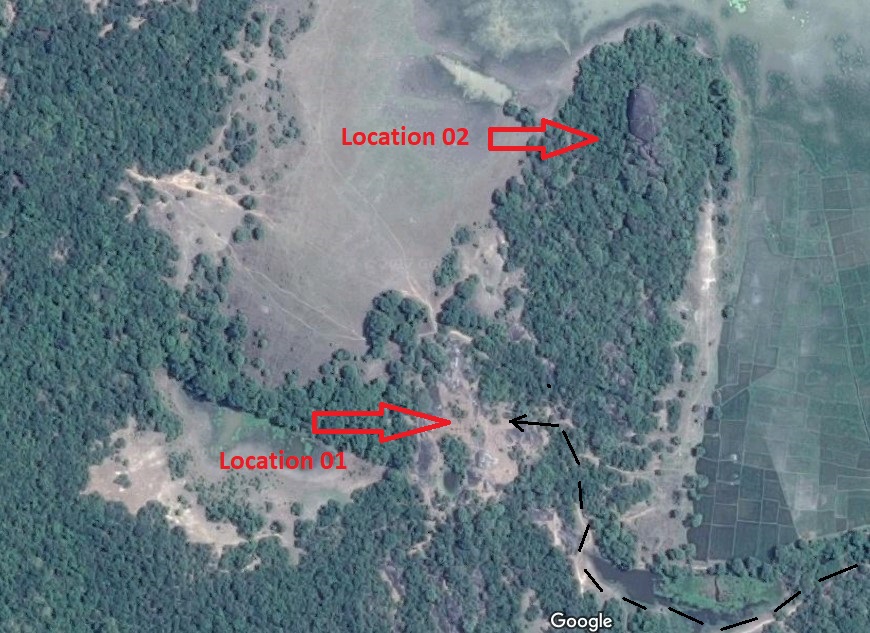 A description of the village would add a charming note to this enchanting location. The village comprises of 224 families and though ethnically a Tamil village, some of the villages have Sinhalese ge-names; a glimpse of the mixed cultures that once grew here. There is one school in the village and the main economic activity of the villagers is cultivation, though a few individuals have Government jobs. The growing of paddy is the main activity but fishing and milking of cows are other such activities. The villagers say that canes (වේවැල් /weval) can also be harvested from here but no such industry exists. Certain sections of the roads are tarred while the rest are in the golden sands of the dry zone. Away from the bustling roads, this village brings the sereneness of the peaceful days of old into the modern world and an urban-vary soul would be glad to taste its calmness.

Heading with our guides in the late morning, we managed to go half the distance on the off road track in the van and hiked the rest as it was hard to get the van through the tiny path. We were told that this was Elephant country and that to be vigilant although they do not show up during this time of the day. Walking along the sandy road about the scrub forests we came near a large rock outcrop and climbed it by a path to the left. This was the main location, it was quite evident here that there was once human settlement as there were numerous rock cut steps in certain sections of the rock and the top was scattered around with bricks, mortise stones for columns and few stone pillars. But a closer examination with the trained eye revealed much more. Amoung the debris spread over the uneven rock surface was the clear mound of a small stupa. A close examination of this revealed that there were three visible stairways to the stupa from the north, east and the west and that this was erected on two podiums. But sadly the stupa had fallen prey to treasure hunters. An entrance had been effected from the north and dug to almost 10 feet. The inner structure of the brick stupa was quite visible. Right next to it was identified as the remains of another stupa, although no visible mound was there. Finally completely surveying the rock, the traces of another two more stupas were found in close proximity to the first two; and as well as two ponds made from the natural slope of the rock. On this same site towards the south from where one enters is found a cave with a drip ledge and an inscription. The inscription contains an early Brahmi script indicating the sites usage from the early Anuradhapura times. Close to this cave is a smaller cave and in it our resource person on a previous visit noticed small drawings in white; this was looked at by our team and hypothesized to be ancient Vadda paintings. There are about three to four scribbles of some form but one which resembles a figure of a man is quite evident. If this in fact dates to ancient Vaddas, it would take this site to the prehistoric times; but this needs to be clearly verified before any theory is put forward. Assessing the remains on the rock outcrop it was clear that this was indeed a forest monastery. From the top of the rock one could get a clear view of the surroundings, the lush green fields, the open willus with herds of buffaloes, the adjoining hilltops and the endless green of the Flood Plains National Park. Our guides stated that during the rains the entire area surrounding the rock becomes one entire willu under water. 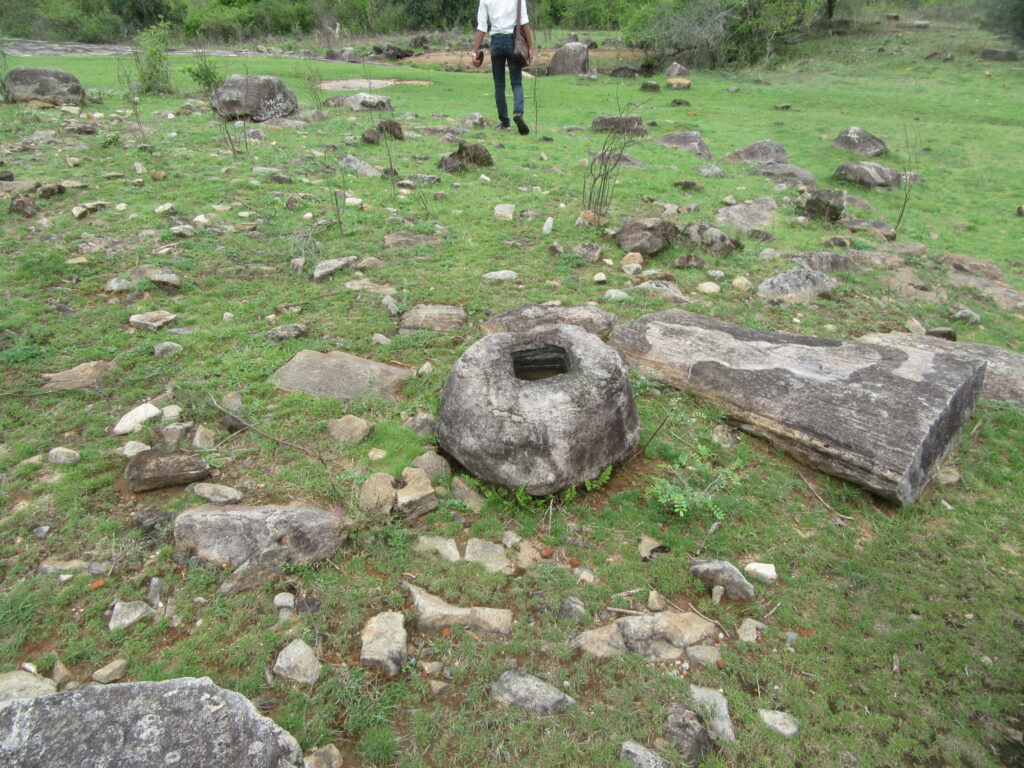 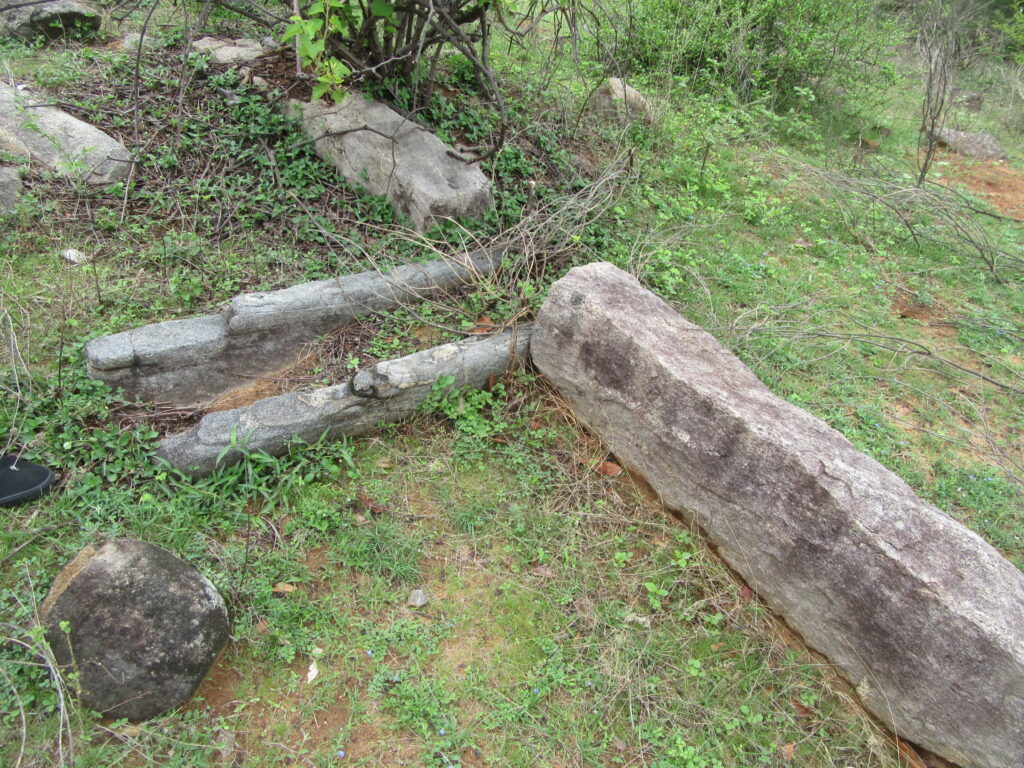 They said that there were more, many caves with inscriptions on the adjoining hillock, so climbing down the rock we headed north east along the edge of the forest line and the open plains. 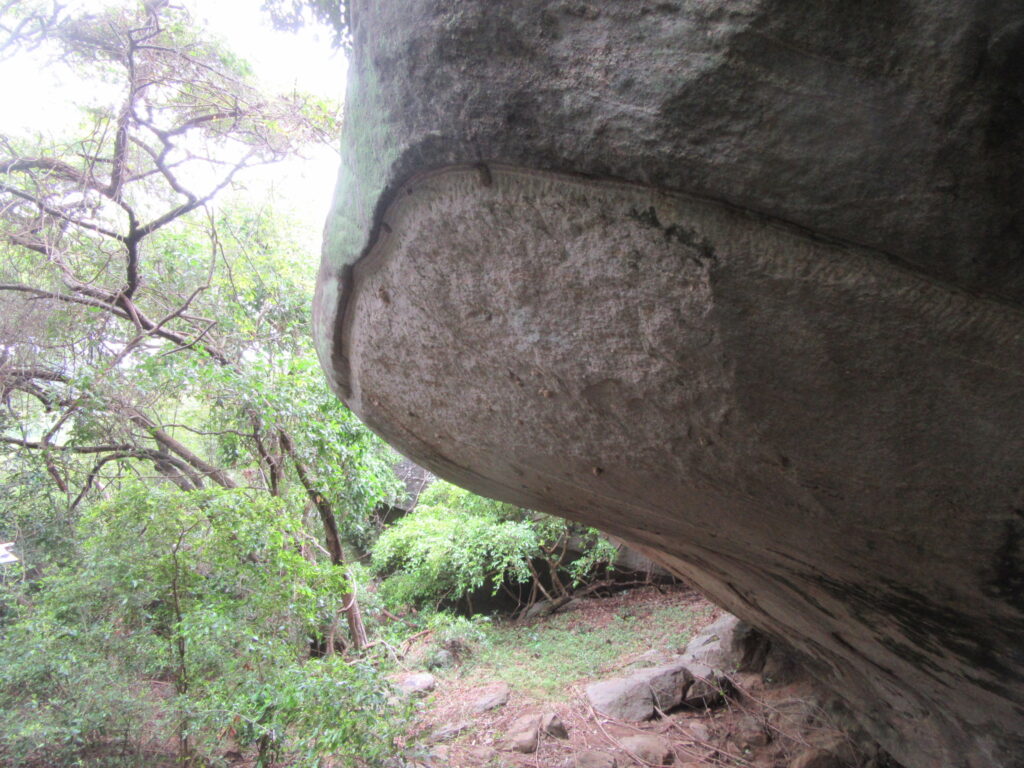 This hillock composed of a single high rock formation with thick jungle around it and one could easily get lost without prior knowledge; indeed we felt this way once we completed our tour of the site as it left us totally confused of our geography. Climbing through the thick vines and over and under rocks we explored here a total of 11 caves spread throughout the area. Out of the 11 caves with drip ledges, seven caves contained early Brahmi rock inscriptions just below the drip ledge. All the inscriptions found here mention the names of donors gifting the caves to the clergy. Near the cave on the highest elevation here was found the remaining materials of a small modern shelter, this the villagers explained that some time back they had brought a monk here to stay but was asked to leave by the Wildlife department. The cave here contained an inscription as well as a symbol; this was not a completely closed one for there was about a 5 foot high gap allowing access to the other side and within this were the ruins of large sleeping Buddha statue, the traces of which were hard to identify as it had been vandalized in antiquity. On the ceiling of this cave can be found the faint traces of paintings as well.

Treasure hunting is a major problem here said the villagers who were with us and said that it is people from far away that are behind this and not from the village. The villagers try their best to protect these sites and have repeatedly appealed to the authorities to take action but to no avail. While the horror of the plundered stupa in the first hillock was still in our minds, we were in for yet another shock. Before going to the high cave they said that there was a boulder near another cave below that had been broken recently in the search of treasure, arriving at the said location we were taken aback as we found it completely destroyed and dug out, several feet until the bedrock. This was a fresh dig which appeared to have been dug just the previous night or a maximum of two nights before. All around were pieces of the slab of rock and fine soil from underneath. It was a sad sight in deed. The villagers stated that there is another location close to the Mahaweli River called Anakaluwa which was a large rock in the shape of an elephant drinking water and that there was a crown and a sword carved on it, this too has sadly been blasted away. They also mentioned that there was a large rock inscription in the first location near the ruined stupas which had been destroyed about 40 years ago.

The splendid drip ledged caves, some reaching over a dozen feet in length surrounded by the ever green forests of the dry zone would have given a peaceful setting for the meditating monks of old and it is sad to see that these centuries old dwellings, protected so well by nature have been disturbed in our times due to false fantasies. Beyond the open plains further to the north was another large rock outcrop, this the villagers stated contained a large rock with one vertical surface in white which they believed would have been plaster for paintings. This too we investigated but found the white layer to be a natural phenomenon.  But there could be much more hidden amidst the jungles. Prof. Senerat Paranavitana in the Epigraphia Zeylanica gives details of 17 early Brahmi rock inscriptions from Muthugala but we were able to find only 8. This untapped archaeological site deserves a deeper investigation which would give valuable information on the human settlement of this now seemingly rural area.